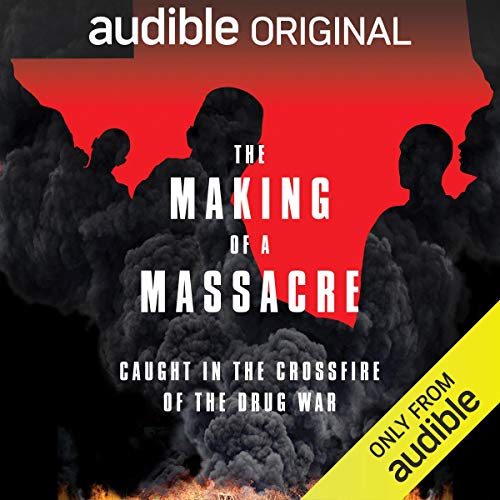 The Making of a Massacre

In March 2011, gunmen from one of the most violent drug trafficking cartels in the world swept through a small Mexican border town, leaving behind dozens of disappearances and deaths. This series follows ProPublica's Pulitzer Prize-winning Ginger Thompson as she investigates an instance where America's war on drugs had devastating civilian consequences. The Making Of A Massacre includes interviews with surviving townspeople, officials, and cartel members – voices of some townspeople have been narrated by actors in translation – and is particularly timely given Trump’s aggressive and erratic threats to clamp down on groups like MS-13.

This is an Audible Original Podcast. Free for members. You can download all 5 episodes to your Library now.

What listeners say about The Making of a Massacre

Really enjoyed this. Terrifying in its detail and frustratingly tragic in how avoidable the event was. Well written and investigated and really enjoyed the production. I picked Cheech and Danny's voices as well! It was quite eye-opening in how such a criminal take over of a society can affect the innocent bystanders left with no options when those in authority refuse to do their job. I think once you're taking payments or making millions you have no defence. Many should be jailed for failing their community.

Sympathies to the families. Thank you for making this story.

Narration was great, the actors were very well chosen. Not for the faint of heart.

An interesting insight into the Mexican cartel, exciting and captivating and equally horrifying. It had me hanging on the edge of my seat in parts.

The insanity of the drug war the futility and the tragedy to real and innocent people is heart breaking.

US and Mexican History / Outstanding work

This is a great account a dark part of US/Mecican history.

Good overall. If you enjoyed this, I can't recommend enough the Power of the Dog series by Don Winslow. That aside, it was interesting, especially since it was non-fiction. The production was mediocre for an Audible Original. The would play music at almost the same volume as a narrator at points, and occasionally that music would have vocals, which made understanding the narrator at times near impossible. I enjoyed it overall, but they went a little too heavy on the production. I'd recommend it though, just make sure you have you attention very well devoted to it, as parts of it can be difficult to understand if you aren't really focused on it.

This is like a movie for your ears. Some of the actors are better than others, but it's a wonderful listen!

I thought it was exceptionally made and I honestly have no complaints. Everything about it was absolutely brilliant! Highly suggest it if you enjoy suspenseful, investigative documentaries

It wasn’t good or bad

A No Holds Barred Tale of a Massacre

This was an excellent series detailing the true story of a drug investigation gone horribly wrong. Pro Publica reporter Ginger Thompson spent a great deal of time investigating this story. She relates her investigation with her interviewee responses read by actors. The mistakes of several DEA agents led to a massacre in a Mexican town. At times chilling, this is a must listen that informs the listener of how drug investigations are handled regarding cartels. The performances were excellent. This one will stay with you.

Making Of a Massacre

Very well told and just heartbreaking. I remember hearing about the missing people but not much more. I can’t imagine living with the memory of the massacre

All the characters make this a great listen

I truly enjoy this story. Have listened to this at least 7 times, you won’t regret it!

I didn’t know what to expect, it went over the expectation, it’s captivating and an eye opener. I highly recommend this story!

This felt like a podcast with a lot of potential - an important story, worth engaging with as much for the insight into the impact of cartels on ordinary people and communities in Mexico as for its relevance to today’s geopolitics.

The reporting was very good, vivid but responsible. The scripting could have been more helpful - e.g. some reminders about who everyone was from episode to episode would have been useful.

The worst aspect by far was the sensationalist, over dramatic music and introductions which were unnecessary, in terrible taste and undermined its standing as a serious piece of journalism.

Interesting but let down by sound issues

This telling was a moderately sympathetic narrative of a horrific set of events in a corrupt government system. It is a story which is ultimately about human beings being unwilling to take responsibility for decisions with drastic consequences and hiding behind the mask of institutions and buck passing.

I found the narrator a skilled interviewer but somehow lacking in empathy for the victims of this horror.

This is a thought provoking and disturbing piece of journalism. It is frightening to see the way in which a drug cartel moved into a rural town and affected the lives of everyone who lived there. The ruthlessness of the cartel is truly shocking. Well worth a listen.

A true event of what happened. Shows the true powers of fear and corruption. Very very sad.

This is genuinely an amazing story where truth is actually more evil than fiction. I have seen much less extreme stories in fictional thrillers described as being unrealistic. It's an unbelievably tragic story of oppression, corruption and unrestrained violence. The fact that it can happen in the modern day will seem almost inconceivable to most of us in the UK but is unfortunately a reality for some.

The production values are as you would expect very strong but to me some of it seemed overly dramatic in tone. The story is an incredible one in its own right so introducing the chapters in the same tone as an action movie trailer and so on really isn't needed. Maybe it does help for a US audience, I couldn't say, but it did take a little of the impact away for my personal tastes.

That said, it is a story that needed to be told, and it needs to be heard so if you have a couple of hours free take the time. just don't expect any faith you have in the goodness of humanity to survive unscathed.

Enjoyed this podcast, time seemed to fly listening to each episode. Such a tradegdy and feel sorry for the families left with no real answers.

Well made but hurts to the core what humans are capable of. Puts life in perspective.