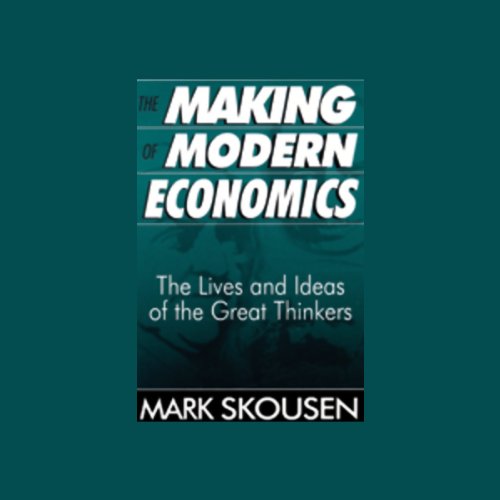 The Making of Modern Economics

Here is a bold new history of economics, the dramatic story of how the great economic thinkers built a rigorous social science without peer.

Unlike other histories of economics, Mark Skousen's book provides a running plot with a singular heroic figure, Adam Smith, at the center of the discipline. Skousen unites the great thinkers by ranking them for or against Adam Smith and his "system of natural liberty". He shows how Karl Marx, Thorstein Veblen, John Maynard Keynes, and even laissez-faire disciples Robert Malthus and David Ricardo detracted from Adam Smith's classical model of democratic capitalism during periods of economic failure and upheaval, while Alfred Marshall, Irving Fisher, Ludwig von Mises, and Milton Friedman, among others, remodeled and improved upon Smithian economics as the world economy recovered and prospered.

Highlights include exciting new revelations about the lives of the great economists, provocative sidelights, humorous anecdotes, and even musical selections reflecting the spirit of each major economist.

What listeners say about The Making of Modern Economics

One of my two favorite audio books. It is filled with interesting facts presented in a logical sequence. The narrator is very easy to listen to. The book puts major economic thoughts into perspective with each other, primarily with respect to Adam Smith and free market theory. A few odd facts about economists are sprinkled in here & there.

I listen to this book quite often -- I just start at a random point & go from there.

Fair Review of the Men Behind Modern Economics

Mark Skousen does an excellent job of bringing the history of economics to life. He weaves the lives of these great thinkers together in such an entertaining way that you don't even realize that you are listening to economics. He helps you to understand the theorists by sharing with you their personal histories. This was a great listen. I thoroughly enjoyed it.

I am amazed that Mark has taken an exhaustive look at the history and characters that have produced the world that we live in today. I do not believe that I would have had the time and focus to read this work with my eyes. I am glad that I was able to listen to it. I have a greater understanding of the ideas and personal beliefs that each of the recent economists have shared with the public. For me, having a foundation of understanding of the history of modern economics is indispensable. Everyone that has any inclination to learn about economics should have this in their library.

The Strange History of Economics

This book was wonderfully written, focusing on the odd people who made the history. I didn't realize how really different these economists really were until reading this. The dismal science has never been so fascinating.

Tremendous! Couldn't put it down.

There are so few authors who really understand the absolutely vital and positive impact that the Austrian, Chicago and Virginia schools have had on economic science. It is written so very well that it is facinating to listen to. This is a great place to hear the real scoop on Marx. Not a bad critique of Mises either. Bravo Dr. Skousen, you are my hero! Now I will have to go out and buy the book.

Interesting and detailed, but has a very very strong bias against any non ultra-free market findings.

One warning is that the author is somewhat homophobic and pro-theism(most obvious in talking about the early 1900's period and for Keynes). This seeps into some of his analysis and colors his opinions on the character of economists he talks about. Going outside of detailing the figures, he goes into simple vitriol and disdain for the figures he obviously has issues with.

As long as you know that this is a specifically pro-free market analysis, the book is very interesting. But don't let the authors irrational points effect you, and keep an eye on all his analysis. This is only one side of the argument, but he does do a somewhat complete job of explaining that side. Buy this and a book that matches it but from a less supply/free market approach and you'll get a nicely balanced view.

What you'll never get in school

Mark's book is good for the reasons mentioned by other reviewers, but it's especially good, because you'll never get this material covered in college. Skousen is a follower of the Austrian school of economics, which is only taught at only several colleges around the country, such as George Mason.

Holly said that this is "neocon" economics, which would be as absurd as calling John Adams a Jeffersonian. Well known "neocons" support at least some of Keynes ideas, such as using fiscal policy to spur the economy during recessions. Austrians universally support a gold standard and favor almost no government endeavors (some don't support it for any).

Worth the read despite strong bias

Although this book gives a very detailed potrait of the history of economics and the story of major economists, I find the author's idiosyncratic style a bit disorienting. Skousen maintains a very free-market perspective in his narrative, judging economists by their adherence to Smith's free market principles. The book also repeats facts and other information, leading me to believe that the book is at least partly a compliation of Skousen's previously written materials. I am not sure why we need to know that David Ricardo's teeth fell out while Skousen spends less time on the development of Ricardo's theories. The suggested musical selections are a bit strange, but they don't detract from the book.
Overall, I would suggest that you read the boook if you are interesteed in the story of economics, but be aware of Skousen's biases. Hopefully, Audible will release Heilbroner's The Wordly Philosophers to offer the other side's perspective.

Mark Skousen is a genius!

This book is about more than money. Mr. Skousen makes sense of how the world works and brings it to you in an entertaining way that makes you not want to put the book down.
I see that he has written quite a few other books and that makes me wonder what else I'm missing.
I wish more of his books were available on Audible.

Outstanding, but better read than listened to?

Audio: 5 star. Excellent. Clear, well-spoken, easily understood. The levels of voice volume and inflection were even throughout with only slight fluctuations occasionally.

Content: 5 star. LOADED with biographical information on economists from the 17th century pre-Adam Smith to the present. (I've heard of the "biggies" but I had no idea there were so many others.) It's also loaded with the gems of economic theory and application from those economists. I only read economics for my personal education but it seems to me the author covers the subject(s) quite well. IMO this might be a good textbook for Intro to Economics or Economic History.

Context: 3 star. I suspect this fine history and reference book may be better to read than to listen to. First, the subject matter jumps around alot. This is probably due to the numerous sidebars and graphs the author mentions in his introduction. Still, it is disconcerting and somewhat hard to follow in the spoken work. Second, some of the gems of economic theory and practice tend to fly right by. Yes, I rewind from time to time but that gets annoying, and you can't easily, if at all, bookmark those gems for later replay. This is the kind of book in written form I would want to reference often, leaf back and forth, look up things in the Index, etc. I found the list of figures, illustrations, and photos online and there are a LOT of them, which of course you won't have in audio.

I'm sure I'm not the first person who has wished audiobooks came with at least a text Table of Contents, perhaps with the time lapsed for each chapter. And wouldn't a function to actually leap to specific chapters be great. I think audiobook sales could be hugely increased with more interactive and informative interfaces.

thorough and interesting but not balanced

I enjoyed listening and learned a lot but this book is written from a defensive American free market standpoint. be prepared to challenge.