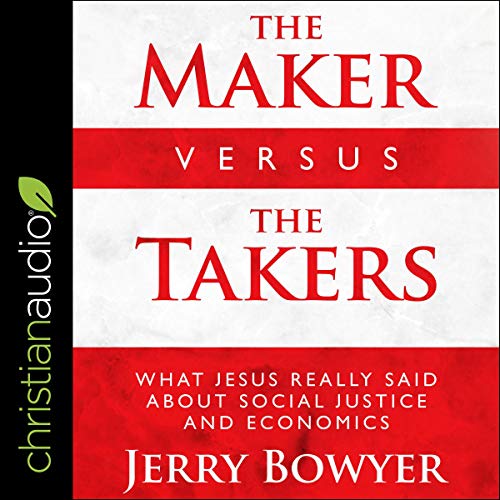 The Maker Versus the Takers

A close reading of the Gospels, taking history and archaeology into account, demolishes the myth of a socialist Jesus.

Theologians virtually ignore the economic commentary in the Bible. In the few cases where it gets any attention, economic commentary in the Gospels and other New Testament writings tend to lapse into simplistic class-warfare nostrums. Liberation theologians import Marxism wholesale (but they try to sell it retail) into theology. Academic historians of first-century Palestine/Judea have been pushing an account of a poor peasant Jesus leading a poor peasant's revolt based on the idea of mass displaced workers in Lower Galilee. The problem is the actual archaeological findings paint a picture of an industrious and entrepreneurial economy during Jesus' time there. Reading the Gospels in light of archaeology and history, which are now available to us, gives us a very different picture than the one you've been told regarding what Jesus taught about work and money.

What listeners say about The Maker Versus the Takers

Originalism and textualism are very much in the public discourse as they relate to interpreting the Constitution and statutory law, but how are they as a tool to understanding the Gospels? In the Maker versus the Takers, Jerry Bowyer makes a compelling argument that, in order to fully understand Jesus' teachings with regard to economics, we have to understand the political, religious, and economic context of Jesus' time and place. Jerry Bowyer lays out a convincing case that Jesus' message was directed at the people he spoke to, in that time and place, and that He addressed the specific economic arrangements of his time as they varied in different geographical regions. Jesus, contrary to leftist ideologues who would claim him as some kind of proto-Marxist or socialist, was not in fact opposed to private property, the production and sale of goods and services for gain, to the basic exchanges that occur in the marketplace. We tend to think about "economics" as the "dismal science" in the academic and theoretical realm. But really, economics is at the very center of human life. It is literally about how we feed, clothe, and shelter ourselves and our families. Of course, then, Jesus preached a lot about money, about economic activity of various kinds, including farming, fishing, building, etc. Jesus Himself, we forget at our peril, was in point of fact, like His foster father Joseph, a craftsman and "small businessman." When Jesus preached in the areas in and around Galilee, which had a more entrepreneurial economy based on production and trade, He was much less critical of the economic system. But when He spoke in and around Jerusalem, the economy of which exploited the working class and poor through an unholy alliance of powerful elites, including the Herodian monarchy, the leaders of institutionalized religion, and to some degree even the Roman oppressors, He was very critical of this exploitation by the elites, of the "takers" who confiscated the production (wealth) of the "makers," through unjust and dishonest structures. From this book, I learned a great deal about these economic systems that I hadn't bothered to understand before, and I have a deeper and more nuanced understanding of Jesus' economic parables, of the role of the "money changers" in the Temple, and of the role of economics in the conspiracy that led to Jesus' arrest and crucifixion. Another immensely useful takeaway is that all those amateur bible studies miss a crucial step, when they ask us to think of how Jesus' teachings apply to our life today, or that assume that everything Jesus said, in Aramaic, translated into Greek, 2,000 years ago, to a particular audience living in very specific circumstances, somehow applies seamlessly to me, living in the 21st century English speaking world. Rather, the more accurate and ultimately more truthful approach, is that the context and text of Jesus' teachings are absolutely essential to a proper understanding of what He actually meant to convey. Once we understand His meaning in the proper context, then we can apply those teachings to our own economic and political structures. As practiced artfully by Jerry Bowyer in the Maker versus the Takers, the result of this approach is a powerful defense of basic economic liberty and an equally powerful repudiation of those who create unjust systems that exploit the less powerful, forcing them into lives of inescapable privation.

This book has helped shaped how I as a Christian should view economics and justice and understand what Jesus was saying about these issues during His time.

Debt was a problem then and now

he does a great job explaining what Jesus said about wealth and debt connecting it with what the listeners understood in the old testament. then he applies it to this time.

Absolutely loved it. Gave me new eyes on reading the Bible. Can't help but use the temporal analyses to help see our political situation today in new light. What would Jesus say and do in our time? This book is a keeper. Worth re-reading again and again. It also is inspiring me to re-read the gospel accounts in full with my new eyes. 👀