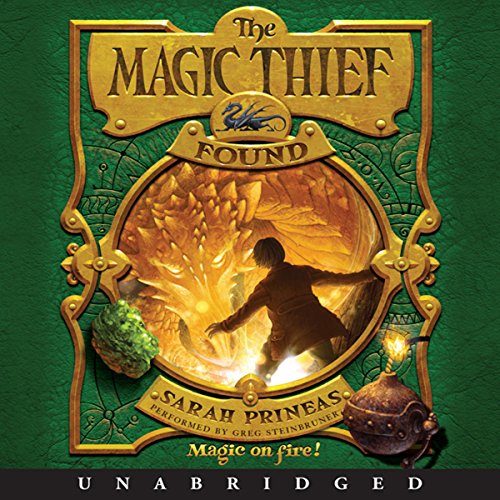 Never turn your back on a dragon!

Sneaking out of prison isn't easy, unless you are a thief, or a wizard. Luckily, Conn is both! Trouble is, once he's out, where does he go? His home is a pile of rubble since he blew it up doing magic. His master, the wizard Nevery, is not happy with him. Worst of all, Conn's been exiled, and staying in the city will mean his death.

But Wellmet is in danger from an evil predator coming to destroy the city, and Conn must set off on a quest to fight it. Suddenly, a huge shadow looms over him and he is swept away by something more awesome than his wildest imaginings. Is Conn brave enough to answer magic's call, or is he really just a thief at heart?

Sarah Prineas's incredible world explodes with adventure, a place where cities run on living magic and heroes come from the most surprising places.

What listeners say about The Magic Thief: Found

I loved the character development and plot line of the series. The author does a great job of capturing a child's mindset.

Love this whole series and Greg Steinbruner was a perfect choice for the naration of these books!

My girls and I are huge Sarah Prineas fans and absolutely love her Magic Thief series.

I listened to this on audiobook and the audiobooks for this series are incredibly well done. The narrator gets Conn’s voice spot on and does an excellent job with the other characters as well. We listened to this in the car on a road trip as a family and everyone really enjoyed it (my son is 7 years old).

Conn has been exiled from Wellmet and his master Nevery isn’t pleased with him. Conn is determined to stay in the city of Wellmet and protect it from the evil magic that is coming. However, when things take a turn for the worse Conn is forced to leave Wellmet. On his adventures he discovers some truly astonishing secrets about magic and how it is tied to the cities.

This was an excellent book in this series. There is a lot of magic, adventure, and humor. The characters all have great relationships (wonderful friendships and mentor/student) with each other and I really enjoyed that too. I love the positive messages, the humor, and the wonderfully unique magic. This book includes....DRAGONS...so awesome!

Conn is such a plucky youth which such a positive outlook on things. Yet he started life as a thief and is struggling to prove himself as a wizard. He is always determined to do what it right despite what other people try to force him to do. He also always tells the truth, even if other people aren’t happy with that truth. He is funny and daring and just a wonderful character.

We also spend a lot more time with Rowan and the new Lord of Twilight, Ember. Both are wonderful characters. I really enjoy Rowan as a character. She is a young woman with a huge responsibility being thrust on her. She’s a great role model, she knows how to deal with Conn’s independence and she is just a ton of fun to read about.

This book does an excellent job of wrapping up the storyline involving evil magic invading Wellmet. The ending did feel a bit rushed, so I am happy to see there is another book coming out for this series.

Overall this was another wonderful book in this series. I just can’t say enough good things about this series. These books are packed with magic, adventure, and excitement. The characters have healthy relationships, there is humor in here, and I love the characters and world. I can't wait to read Magic Thief: Home when it releases. This whole series is highly recommended to fantasy fans of all ages. It’s one of my favorite middle grade fantasy series ever.

Please get the rest of the books audible