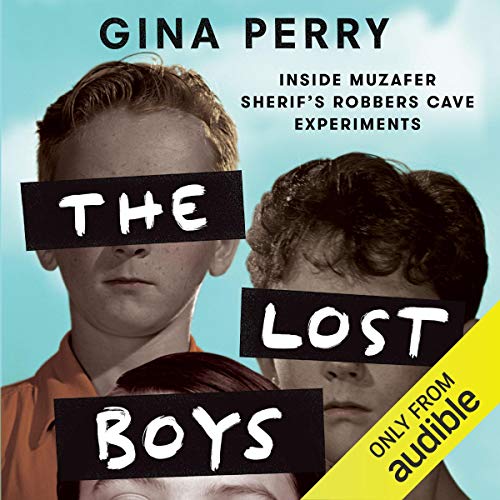 The fascinating true story of one of the most controversial psychological experiments of the modern era.

In 1954, a group of boys attended a remote summer camp in Oklahoma. There they were split into two groups and encouraged to bully, harass and demonise each other. The results would make history as one of social psychology’s classic studies: the Robbers Cave experiment.

Conducted at the height of the Cold War, the experiment officially had a happy ending: the boys reconciled, and psychologist Muzafer Sherif demonstrated that while hatred and violence are powerful forces, so, too, are cooperation and harmony. Today it is proffered as proof that under the right conditions warring groups can make peace. Yet the true story of the experiments is far more complex - and more chilling.

In The Lost Boys, Gina Perry explores the experiment and its consequences, tracing the story of Sherif, a troubled outsider who struggled to craft an experiment that would vanquish his personal demons. Drawing on archival material and new interviews, Perry pieces together a story of drama, mutiny and intrigue that has never been told before.

What listeners say about The Lost Boys

Note to the actor: it’s pronounced Curt Loo-win rather that Levine. I’m happy for the review to be pulled as I’m not sure that there’s another way to feed this back. However it was quite distracting as the listener when I was trying to google who Curt Levine is.

Excellent reading of a most unusual book

I would not normally read a work of social psychology, but wanted to read this one because I had had some contact with Gina Perry many years ago, in Melbourne, Australia. I was drawn in from the very first minute, because of Gina's fine narrative style, and Jenny Vuletic's reading. I have listened to dozens of books via Audible, and of all the readers I have heard, she stands out as the most skilful and engaging. Gina's portrait of Muzafer Sherif is very good - just as I thought I understood him, she would introduce new elements almost overturning the picture I had built up. I particularly enjoyed the passages from Turkey, as she dug up quite a lot of information about the country he grew up in, at a time of enormous conflict, and used it as a way of understanding his career as a social psychologist in America. I have been to Izmir, once known as Smyrna, and was aware of the dreadful conflicts played out there, though did not know of the fire that razed much of the city. This is a well-written book, put together from a myriad of sources, and casts light on a stressful time in US history, the McCarthy era.