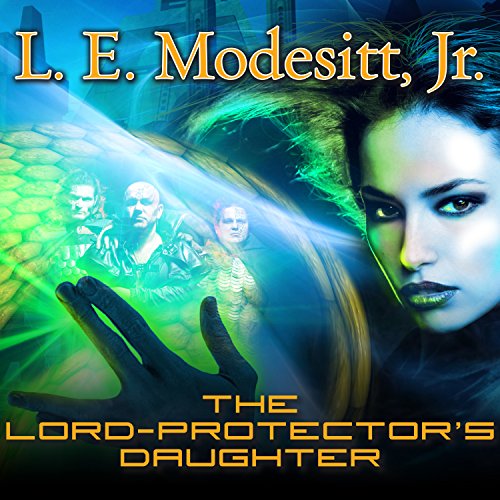 Mykella, the eldest daughter of the Lord-Protector of Lanachrona, discovers that someone is diverting significant sums of money from her father's treasury. Soon, a series of fatal and near fatal accidents occur with members of her family and trusted retainers. Then there are attempts to remove Mykella and her sisters from the capital by marrying them off.

While Mykella develops a solid idea of who stands behind it all, each of her attempts at a solution is used to discredit her. But Mykella is also discovering her talent for magic.

"The characters are flawless, his worldbuilding continues to enchant and there is always plenty of conflict and mystery." (RT Book Reviews)

What listeners say about The Lord-Protector's Daughter

Another great story. They just keep coming. This author has a style above and beyond the normal.

shorter than other books in the series but good

In this resurrection of the Corean Chronicles, Modesitt should have left well enough alone.
Right from its onset, one is wondering how events are occurring, or even why. How is it that Mykella "knows" something is wrong with the accounting books? Where did the Soarer come from that had all died out? And even its final ending makes you ask the question "Why didn't she do this earlier before all of the deaths occurred"? Mykella's whole demeanor throughout the book is disheartening, showing little or no "guts" to make a hard decision, or to take a stand for her beliefs. Instead she hides her failure by a "dear me, no one will listen to me so why bother" altitude. Sadly, it appears that Modesitt has already brought Mykella back, and I for one, will pass on it.

A so so storie

Not one of the best. seemed to be a lot of talking heads. enjoyable none the less

all intrigue and no action

What disappointed you about The Lord-Protector's Daughter?

to much angst, self doubt, pointless intrigue and no action all the worst points of the series squeezed into one book half the length of the rest

What could L. E. Modesitt, Jr. have done to make this a more enjoyable book for you?

completely cut out this tale there have been gaps of centuries where this series starts three quarters of the way through the timeline, he could have missed this out completely and the series would have been all the better for it, this book started off slow and got slower where only the people who where not in a position to help could see what was right in front of their face and those that did have the power to help couldn't see it if their life depended on it, totally frustrating and even though the book was half the length of the rest of the series it was still twice as long as It should have been (imo)

Which character – as performed by Kyle McCarley – was your favourite?

If you could play editor, what scene or scenes would you have cut from The Lord-Protector's Daughter?

the whole basis of the story line was slow and turgid frustratingly obvious from the start with the repetitive nature of the way the lead character learns of their ability and how they go about strengthening it to the clichéd lord who is nice but blind to the treachery all around him, there's no saving it

if you hope to get what you had in the previous 6 books of action and adventure where talented commanders fight aliens to save the world from death or glory then you're in for a huge disappointment if credits are hard come by, either stop at book 6 or skip book 7 as it is a poor shadow of the rest of the series, clearly the author is running out of idea's

The book focuses totally on a single storyline and a single character, Mykela, unlike any of the other books in the series, in my view very much to its detriment. The link between two periods in the Corean history was welcomed, but did it have to be this short, without any sub plots. I hope that Book 8 isn't compromised by the paucity of characters that feed into it.

Was there more than one character?

Have you listened to any of Kyle McCarley’s other performances? How does this one compare?

I have listened to Kyle McCarthy in the other Corean books and his performance maintains an excellent standard. Perhaps a little was lost by not having a female performer for this particular book, but in my view McCarley is perfect for the role.

Do you think The Lord-Protector's Daughter needs a follow-up book? Why or why not?

It is part of a series

My least favourite L.E. Modessit book, missing a lot with its single storyline. I am not sure if I would have read any more if it had been the first. But I will continue and finish the series and probably read more of his stories - depending on how the Book8 pans out.