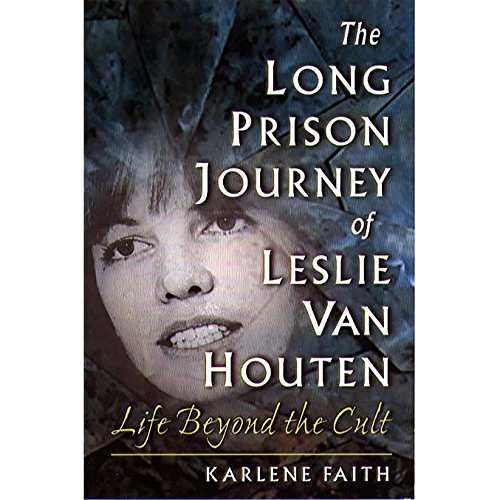 Life Beyond the Cult
By: Karlene Faith
Narrated by: Gabra Zackman
Length: 7 hrs and 11 mins
Categories: Non-fiction, Gender Issues
5 out of 5 stars 5.0 (1 rating)

At the age of 21, Leslie van Houten was sentenced to death, along with Charles Manson and his other disciples, for the infamous murder rampage spanning two nights in August 1969. Leslie, who had been present at the Rosemary and Leno LaBianca stabbings, serenely accepted her sentence, wishing only that she had better served Manson in carrying out his apocalyptic vision of "Helter Skelter". When the United States temporarily suspended its death penalty, her sentence for murder conspiracy was converted to life in prison. Today, at the age of 51, after three trials and with no parole in sight, Leslie has become a remarkable survivor of a living nightmare.

This work presents the first in-depth look at how this "girl next door" became one of Manson's "girls". It also tells about Karlene Faith's 30-year friendship with Leslie, whom she met while teaching in prison. To everyone who encountered Leslie - including prison staff and television journalists - she was not the demon typically portrayed by the media but rather a gentle, generous spirit who mourned her victims. But why didn't this intelligent young woman see the evil in the "messiah" who had sexually exploited her, preached a racist ideology, and ordered her to murder?

Faith pieces together the puzzle, starting with Leslie's spiritual quest within the '60s counterculture and her immediate attraction to Manson during a chance meeting. We learn of Manson's ability to look into her mind and commiserate with her turmoil. We also see his own need to control women and how his brainwashing techniques enabled his followers to embrace him as God, giving them little choice but to obey.

Leslie's journey out of Manson's grasp is a riveting feminist and spiritual story of recovering one's self. Why this rehabilitated woman, long punished for one man's madness, has not been able to leave prison is another story Faith brings to light. Filled with accounts of political injustices, this powerful book moves the listener to rethink the meanings and limits of guilt and punishment.

A beautiful soul can do unspeakable thing

Amazing book. Karlene Faith digs deep to reveal the beautiful soul that is Leslie van Houten. No one including LVH herself excuses what she did, but live in the real world.... there are reasons things happen. Faith reveals both sides. I wished this book went on for another 1000 pages

I was expecting so much from this book, but gained little. It's obvious the author is a friend and fan of Leslie, so I thought there would be more insight. Instead, you will hear every detail of every parol hearing, repetitive excerpts of letters, a recap of the crimes, trials, and a little bit about how she spends her time in prison etc.. This came across as more a book about how unfair the justice system is to certain individuals than a book about Leslie herself.

The absolute worst feminism has to offer

This book is filled with the worst feminism has to offer. In short – when it comes to life choices, if my choice yields good results it’s because it was all my idea. If my choice yields bad results it’s because of the evil patriarchy set me up to fail and I should not be held equally accountable for my actions. 7 hours of my life I’ll never get back! Spare yourselves.

This author glosses over any detail showing Leslie in a bad light with a “true, buuuuutttttt”. For example when Leslie was caught in prison with marijuana in prison, the author uses dismissive phases such as “that someone had given her” as opposed to something she procured for herself to use drugs while inside prison. This authors narrative is that Leslie is less culpable for the killings because she only stabbed Rosemary and only after Rosemary was already dead. She does not mention that Susan tried this argument at her parole hearing first and Patricia tried to say at her first hearing that she didn’t kill anyone either, that she was look-out at the Tate killings and tried but couldn’t stab Rosemary.

At another point of the book she makes up a fictional story about two people who kill a couple inside their ("poor inner city", {you can see what she’s implying with that}) home and describes the male criminal “forcing” the female criminal with demands of “DO IT DO IT DO IT DO IT”, as a way to make the reader feel sorry for what Leslie went through the night she entered into the LaBianca’s house. However this was very disingenuous because nothing of the sort happened to Leslie. By Leslie’s own admission in later parole hearings, she wanted to go out with the others the night of the killing and knew she’d be killing too and wanted to kill because in LESLIES’S OWN WORDS, she was very close to Patricia and wanted to be part of the important work they were doing.

Then she out and out says that because the LaBianca’s where a “white couple” the crime was made worse. On what planet does someone call an Italian immigrant named Pasqualino Antonio “Leno” LaBianca and a Mexican woman named Rosemary who was born in Mexico and adopted out of an AZ orphanage, a white couple? Like I said, disingenuous, had she been writing a different book she’d no doubt call them the perfect immigrant success story.

It was about that time I realized I had no respect for this author.

I thought this would be more of the discussion on what Karlene did with working with Leslie, etc. It was a rehash of trials, news stories. You kept waiting for her to get to the actual story.

im not quite sure how the author made such an interesting subject so boring and dull.

An interesting story ruined by the fact the author has clearly never heard of Florence Nightingale Syndrome and has a feminist/anti-man agenda throughout the book.

More respect to the REAL victims should have been paid.