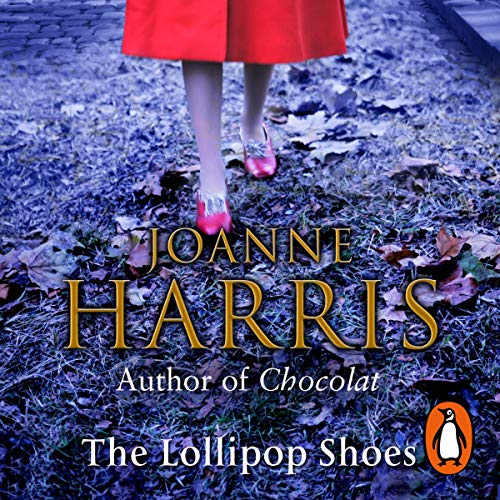 Seeking refuge and anonymity in the cobbled streets of Montmartre, Yanne and her daughters, Rosette and Annie, live peacefully, if not happily, above their little chocolate shop. Nothing unusual marks them out; no red sachets hang by the door. The wind has stopped - at least for a while.

Then into their lives blows Zozie de l’Alba, the lady with the lollipop shoes, and everything begins to change…. But this new friendship is not what it seems. Ruthless, devious and seductive, Zozie de l’Alba has plans of her own – plans that will shake their world to pieces. And with everything she loves at stake, Yanne must face a difficult choice; to flee, as she has done so many times before, or to confront her most dangerous enemy… Herself.

This is a wonderful book written by a brilliant storyteller. Deliciously descriptive, builds suspense and intrigue. Well narrated, not by the author, but the crisp English accent gave the narcissist the hardness needed. Having the misfortune to have met people like Zozie, her portrayal was frighteningly accurate, and I was glad for the happy ending to her involvement.

Every now and the. You read a book that changes your life. For me, this is one of those books. It is a profound and deeply moving story about narcissism and the impact this disorder has both on the person with the disorder and all those around them. It is harrowing for those of us who have come under the dark influence of such a person. It is also ultimately liberating as well. Like all of Harris’ novels, there are layers here that reward the reader with lots of thought-provoking switchbacks and double-takes. You can enter this world again and again and never be bored. I highly recommend this novel. The audio is also of the first quality and the narrator does a wonderful job of altering the voicing for each character with just enough subtlety and consistently to be able to carry the narrative quite effectively. You have to be alert however, to the changes in character as and when they occur or it can be a little confusing.

I adored Chocolat by the same author; it was a dose of magical realism, romance and embracing life.

Firstly, I liked the narration by Juliet Stevenson as it was clear, a great actress, and when voicing the male characters, I actually thought a male actor had been employed. Ms Steveson's performance of this story was superb and I will actively seek out other books she has chosen to narrate. The story is told through three characters: Vianne, Anouk and Zozie. Ms Steveson made it easy for me to determine to whom a particular chapter related in just the first few words; her characterisation of each individual voice so skillfully personified. I just cannot praise, or thank Juliet Stevenson enough for narrating The Lollipop Shoes, in unabridged format at that.

I adored the inclusion of folk and fairy tales throughout the story. Each was a morality tale, as was the whole book (see below for more on this aspect), and each raised the suspicions of this reader. As an adult, I still have my childhood compendium of fairytales and I read them in times when I need to feel comforted, so to find an adult book along the same lines is refreshing. These folk and fairy tales are the clues to the secrets in this book, so pay attention.

The Lollipop Shoes is darker than Chocolat, more like those old-fashioned Grimm fairy tales (before sanitisation) highlighting the gruesome fate that awaits the unwary child who ignores their parent's warnings, and which have a hard lesson to impart wrapped up in a cloak of alluring magic. The magic in this story was much more overt and fairytale-like than the subtle magical realism employed in the first book. I probably enjoyed this because of my penchant for those tales I read as a child, though I can see where it might not be to everyone's liking who enjoyed the more subtle, more believable (?) magic in Chocolat. The Lollipop Shoes is more of a mystery book, with a dire sense of danger to it, rather than the quaint tale of the battle between different outlooks, beliefs and morals of the earlier book, though these do play a significant part in the story.

The characterisation of the three narrating voices - Vianne, Anouk and Zozi - had depth, and the tension between them was palpable. Shining light on a situation/scene from the point of view of different characters enhanced the feeling of something not being right. In fact, the tension and danger was palpable because of the insights into the thought processes of three, rather than the usual one, or two characters. As the ending approached, the tension tightened and I found myself on edge, and having to listen all through the night and into morning until the climax; I could not stop listening so desperate was I to learn the fates of these three, desperate women.

The Lollipop Shoes is also a coming-of-age tale and explores themes of finding one's place in the world-at-large, bullying, the growing pains experienced by parents and children as time passes, and the tension this causes between the two. There is also a window on how a parent might balance protecting their children against preparing them for adulthood, and the unique challenges encountered with children that are outside (what society might consider) the norm.

Finally, the food; so enticing; so delicious. Joanne Harris knows how to awaken the senses with her descriptions, and I could smell, see and almost touch every culinary creation within the book. With Juliet Stevenson delivering the lines with such sumptuousness, the kind that raises real cravings within me, without resorting to that overt food porn voice employed by those Marks and Spencer's commercials that are meant to entice the whole of the UK, I am ever so grateful that I didn't have a scrap of chocolate in the house when reading this book, or unhealthy food of any type, as temptation was invoked with every word.

Yan (Vianne) was very whiny in The Lollipop Shoes and the repetitive nature of her complaints did begin to wear, though I know this is often how those of that state of mind behave, not realising they are sounding like a broken record. In a similar vein, I am not sure if Joanne Harris believes her readers to be a little dim, or possessing poor memories, but there was quite a bit of repetition in the book and not just because the same scenes were being voiced by different characters. There was more than one instance when I thought: "Aren't these the exact words she used before and the same story? Has my iPod backtracked without me knowing?"

I'm afraid there were a few issues with the audio version in that the volume was a little too low and, though perfectly appropriate for this style of story, it meant I had to turn up the volume on my player and this led to some unusual background noises: static; someone receiving an email on Outlook (we all know that pinging sound, don't we?); and some other, not quite discernible, but nevertheless potentially distracting sounds.

I would recommend the Lollipop Shoes to listeners. It's a strong story that draws you in and you listen in wonder, all the while hoping that when the battle comes, your chosen heroine will be triumphant and the villain punished. Just remember, real life is more a Grimm fairytale, than Disney-like "dreams come true" tale.

I did enjoy this but nothing like as much as the recording of Chocolat I bought first. I rate the content as 3 stars but give it 4 because of Juliet Stevenson's amazing reading. The story simply isn't as magical, as evocative or as charming as Chocolat - but that would be a hard act to follow! On the other hand it gives other characters a centre stage and the ending, if trite, is neat.

I love this audio book!

I just love this story. I love the characters, the location, the magic and the deceit. I have listened to the whole book 4 times!!!

Which character – as performed by Juliet Stevenson – was your favourite?

To me as a non native speaker Juliette Stevenson's performance of the three viewpoints of Vianne, Annouk and Zozie is brillant.

A fantastic book made unbelievably brilliant!

I've read this book before, and been gripped by the power of Joanne Harris's invention and the vivid nature of her writing, but Juliet Stevenson's totally masterly performance takes it to a whole new level of perfection. Without spoiling the plot, the book is narrated by 3 separate (female) characters in turn - Viane, Zozie and Anouk - and Juliet Stevenson's characterisation of each is astounding, and completely faithful to the author's portrayal. One can tell within just a few words of the start of each chapter which of the narrators is speaking, since she uses a very clearly delineated timbre and tone for each of them. Ordinarily I listen to audiobooks whilst doing other things, but as this one reached its climax I just had to stop and listen. Enthralling!

I was dubious at first as I thought it was just a re-hashed Chocolat story but although it does follow the same characters and similar themes it just got better and better and I couldn't wait to listen to it every day. I love the way Harris weaves the fantastical in with the mundanity of every day modern life.

Of the 3 books in this series I enjoyed this one the best. The author's style of writing from the 1 st person for 3 of the characters adds priceless depth to the story because you can see the world from 3 different points of view. The story was scary, macabre & magnificent. The Narrator's talent was awesome & added yet another depth to the whole package. I couldn't have read it in my head as well as j Stevenson delivered the story.

One of those reads that takes your imagination and delights the brain and the ears!

Was unsure about buying this book at first. I knew there was a film out in cinemas, however I am pleased if did. I like the pace of the story, the narration and at times I was a little concerned st the detail. A good listen and may well buy more from this author.

Gorgeous reading of a beautiful story

This book, like the first, feels as slow and warm as the chocolate a lot of the time, but sometimes a twist of chilli surprises you. Wonderful magical tale.

Joanne Harris has done it again. The second part of the Chocolate trilogy. I really enjoyed the mysticism of this story. Beautifully written in her own special style. A well recommended read.