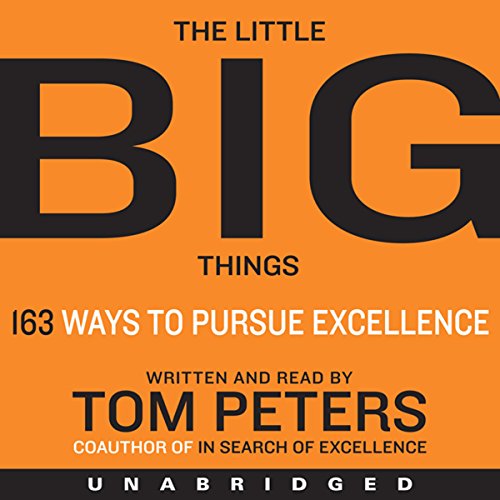 "Years ago, I wrote about a retail store in the Palo Alto environs—a good one, which had a box of two-cent candies at the checkout. I subsequently remember that 'little' parting gesture of the two-cent candy as a symbol of all that is Excellent at that store. Dozens of people who have attended seminars of mine—from retailers to bankers to plumbing-supply-house owners—have come up to remind me, sometimes 15 or 20 years later, of 'the two-cent candy story', and to tell me how it had a sizable impact on how they did business, metaphorically and in fact.

"Well, the Two-Cent Candy Phenomenon has struck again—with oomph and in the most unlikely of places.

"For years, Singapore's 'brand" has more or less been Southeast Asia's 'place that works'....But as 'the rest' in the geographic neighborhood closed the efficiency gap, and China continued to rise-race-soar, Singapore decided a couple of years ago to 'rebrand' itself as not only a place that works but also as an exciting, 'with it' city.

"Singapore's fabled operating efficiency starts, as indeed it should, at ports of entry—the airport being a prime example. From immigration to baggage claim to transportation downtown, the services are unmatched anywhere in the world for speed and efficiency:

"Ask yourself now: What is my (personal, department, project, restaurant, law firm) 'Two-Cent Candy'? Does every part of the process of working with us/me include two-cent candies? Do we, as a group, 'think two-cent candies'?

"Operationalizing: Make 'two-centing it' part and parcel of 'the way we do business around here'."
--Tom Peters

What listeners say about The Little Big Things

Personally, I found this book very hard to listen. It seems that author is too much in love with the ideas he is trying to convey, and for this reason "eats the microphone", repeating the same point three of four times. Moreover, some of the "insights" are given without any explanation, keeping the listener wondering what are they all about. Material doesn't seem to have any structure - all in all, the book looks like a collection of blog posts, a big blob of spontaneous insights.
Finally, I am really skeptic about an author who has to publish 163 (!) tips to make his point that small things matter. Could not the same message be packed in a more concise format?

Corny as can be. So much fluff.

I tried to think of a way to convey just how bad I think this book was. It's hard to do,I would listen and think there was no way that Tom could possibly believe most of what he writes. I think that his belief is that repeating demands over and over in a brash, cocky, "in your face" tone is somehow good business motivating and direction. I made it through about half and then got so pissed at the repetitive nonsense that I had to just stop.

good read.. too much soapbox..

A decent book, but one better served in paperback vs. audio since these chapters would be easier to digest little by little..


A decent book, but one better served in paperback vs audio since these chapters would be easier to digest little by little..

Good, but not Tom's best

Peters is an excellent reader of his own stuff, very engaging. There is a lot of good stuff here, some fluffy stuff. Not Peters' best, but still better than most business/personal improvement books. Worth your time.

If I was in a fox hole or stuck on a sinking ship, the one person I would want with me is Tom! His advice can be scary, but I can guarantee it will work.

An excellent book! I could not stop listening! Powerful message. Relevant examples. Practical activities to implement.

Do The Little Things That Make A Big Difference

I purchased this book looking for tips on improving attention to detail. What I got was more than 100 essays on putting forward the best of me on a daily basis (including what it takes to win that details battle).
A wonderful read for winning each and every day. It's fIlled with original perspective and solid recommendations.

Has The Little Big Things turned you off from other books in this genre?

This is probably the last Tom Peters book I will read.

Who would you have cast as narrator instead of Tom Peters?

He is a fine narrator. The problem with the book has nothing to do with the narrator.

I really didn't find any redeeming qualities. I have found Mr. Peters past books to be very fine.

Save your money--don't buy this book.

Yes. I believe that this book's focus is on achieving Excellence through the practice of a little effort goes a long way.

This was my second book on professional development. So, for me, this book changed my attitude and outlook on what my responsibilities should be as an employee. If I want to move up in any company, it starts with me, and my focus on excellence.

Anything on the topic of, MBWA - Manage By Wandering Around.

Excellence is in you, all you have to do is want it.

I am not in management. These ideas have inspired an attitude change in me. My job is not just a job, but an opportunity to be Excellent. I want to do more. Tom's ideas have helped me transform my work ethic completely.

Only Tom could get away with the information in the way he communicates it. Compelling and totally on the money.

The Guru's Guru; worth every penny and then some

I just want to redress the balance and give an alternative perspective.

Firstly, this is based largely on re-edited collected blogs and as such it can repeat many core subjects. Many of these key messages bear repeating. Sure, Tom Peters has a distinctive no nonsense, cut through the BS, why aren't you doing this - are you stupid? attitude and fans love him for it.

There are quite literally hundreds of gems within and I have bought the 'real' book for reference on the back of listening to the audiobook. This is not just inspirational, it is a call to arms for all of us, relevant to all organisations. As Tom (frequently) reminds us, we are all sales people, we are all selling something.

If you are serious about constant and never-ending improvement and out-of-this-world service, then this is a great source of thought-provoking ideas, kick-up-the-pants chiding and passionate treatise to accompany you on the journey. You'll be in masterful company.

The Best Business Book of 2010

I have seen the last 2 reviews but must respectfully disagree. This is and remains one of my favourite business books of all time. Every one of the 163 Little Big Things has the power to move, to reshape a company and I would love to see a business embrace just 1% of what Tom talks about. There are also some fantastic videos and PDF downloads to accompany the book. If you want something that will gather dust and look pretty then this book is not for you. It is an ACTION MANIFESTO.

Dissapointing, long winded, repettitive, tiresome and bullying - I regret buying this book there is so much more I need for my money - this did not deliver.

I listen to many business audio books but made two bad selections this month. This one was hard to listen to and really didn't encourage new thinking.
I'm sure there are great facts in there but I just couldn't keep going.

Too many "quote-unquotes" for smooth listening but if you can get past that, there are some useful nuggets and definitely food for thought for business owners and individuals alike. Tom borrows from lots of areas which is enriching but that's what causes the "". Keep at it and you will learn something. I listened twice and the "" didn't jar so much the second time around. I'm considering buying the print version for future reference.

If you could sum up The Little Big Things in three words, what would they be?

Sadly the narration lets it down.I found myself zoning out quite often and all because of the narration. There are some great readers out there but sadly this gent should have just stuck to writing the book.

This book is full of great information and tips. Some are obvious but then I often find that these are the most useful. We sometimes don't see the wood for the trees when we are swamped by 1001 things that need doing when we work for ourselves.