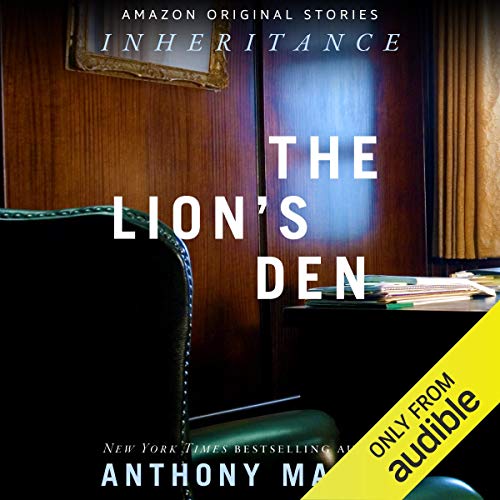 Exposing his father’s transgressions in a tell-all was the ethical, righteous--and profitable--thing to do. What’s left but to slink back home for a humbling face-to-face with the man whose secrets he sold?

He was a notorious government whistle-blower. Depending on whom you ask, he’s a treasonous felon, a folk hero, a validated patriot, or a national disgrace. To his son, Michael, he’s the father who threw his family into upheaval. Now, having moved back home at the age of thirty-four, Michael is getting to know him as a man. And getting nearer to understanding his motivations that have remained a mystery in this darkly humorous short story of sacrifice and betrayal by New York Times bestselling author Anthony Marra.

Anthony Marra’s The Lion’s Den is part of Inheritance, a collection of five stories about secrets, unspoken desires, and dangerous revelations between loved ones. Each piece can be read or listened to in a single setting. By yourself, behind closed doors, or shared with someone you trust.

What listeners say about The Lion's Den

A perfectly wry short story. Michael has grown up resenting the huge shadow of his father, an infamous controversial whistleblower both denounced and lauded. In the last days of his father’s life, Michael reflects on his father’s, and his own, legacies. I loved everything about this - the dark humour, the personal writing, the humanity. It’s makes me want to read everything by this author!

Beautifully written short story, with a surprising amount of humor and an ending with emotional heft.

Marra is an extremely talented author whose addition to the Inheritance Collection broke up the monotony of the previous two books, which were emotionally heavy. Michael's father was a well known Nobel Prize winner, but had been imprisoned for treason thanks to his son spilling all of his secrets. As his father is close to death, and Michael has no other choice but to move home, father and son heal the rift between the slightly. Comical at times, especially talking about the days he spent at Catholic school, the ending left me wanting a better conclusion, but still I enjoyed it and will look into other works of his. Pabon is a fabulous narrator, one whom I plan on researching to see if he's narrated any other books that I'd listen to.

Great book! E.enjoyed the read very much and would recommend to anyone whom enjoys the characters and action packed.

Never really took flight. Seemed to be a dull story that never captured the essence of the name. Feel as if it never got the original point to come across and pop off the pages.

I was drawn into the story despite my dislike of narrators who speak directly to the reader. The ending left me wanting more. The story is told by the author of a scathing exposé of his own father, who is now dying of cancer. The ethics speech given at his Catholic grade school is priceless.

I enjoyed this short story and its unexpected plot twist. I totally emphasized with the characters and wondered what I would do if those circumstances happened to me and my family. I would love to know the author's insight on the dynamics and what he was thinking about the symbolism of the lion's den.

Story was painfully bland and boring! I suffered through it until the end, but really could not wait for it to end. This is my first listen in the “Inheritance” series; I hope the others are better than this first very disappointing offering.