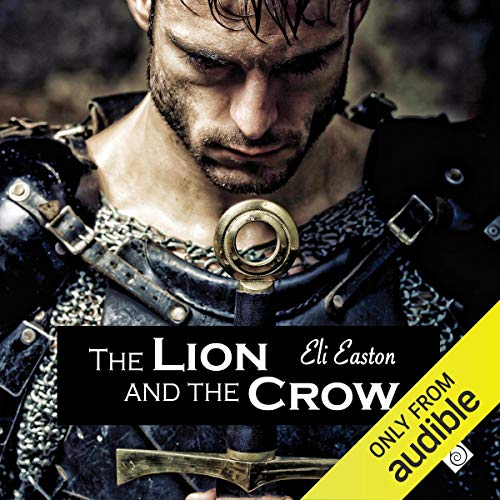 The Lion and the Crow

In medieval England, duty is everything, personal honor is more valued than life itself, and homosexuality is not tolerated by the church or society.

Sir Christian Brandon was raised in a household where he was hated for his unusual beauty and for his parentage. Being smaller than his six brutish half-brothers, he learned to survive by using his wits and his gift for strategy, earning him the nickname the Crow.

Sir William Corbett, a large and fierce warrior known as the Lion, has pushed his unnatural desires down all his life. He's determined to live up to his own ideal of a gallant knight. When he takes up a quest to rescue his sister from her abusive lord of a husband, he's forced to enlist the help of Sir Christian. It's a partnership that will test every strand of his moral fiber, and, eventually, his understanding of the meaning of duty, honor, and love.

What listeners say about The Lion and the Crow

I will admit I was hesitant for this audio book - not only because it's a historical romance, which can be an iffy thing when dealing with M/M unless it's AU, but because when I listened to the sample the narrator, Scott Richard Ehredt, sounded like a stuffy old British guy who would bore me to death. God, was I wrong!

Scott Richard Ehredt is PERFECT. He blew me away. Seriously...Blew. Me. Away.

The characters and time (late 1200's to early 1300's) are beautifully, and even lovingly, portrayed. The only thing I didn't love about this was the ending (even though it totally fits). The ending killed me. I hated the ending. I wish someone had warned me.

Rungs above on the ladder of homo-narratives

Situated in time and space, rich with historical imagery, and not lacking in steam.

The hopeless romantic and history nerd in me dreaded hearing "we hope you have enjoyed this audible...."

Would you listen to The Lion and the Crow again? Why?

Yes. I enjoyed the character developement, the overall story and the subjectm matter.

What does Scott Richard Ehredt bring to the story that you wouldn’t experience if you just read the book?

As with his other works, he brought the story alive. I enjoy the various voices and differences he brings. He has passion in his words and the story flows.

The author in my opinion made a fabulous story out of historic events and fictional ones. I loved it.

Excellent book and audio! What an excellent narrator. I thoroughly enjoyed the experience.

Books by this author are some of my favorites.

Christian and William are both sons of nobility and live in a time (Medieval) when the church and society fear homosexuality (while ignoring it if Royalty are involved.) There is absolutely no way these two can be a couple – except that Eli Easton manages to find a beautiful solution to their problem.

The romance is slow to build but hot and tender. Eli is a master at making us fall in love with her characters and given the time period and constraints it was a daunting task but she did it!

I even loved Christian’s wife – yes wife!- and thought that aspect of their lives was really depicted marvelously.

In the end we see our lover with a HEA and …. Well… I’m not so sure why the end needed to go beyond the HEA – I suppose ripping my heart out was a requirement! – but it was beautiful even if I’d wished I’d never read it.

I love this author, she is absolutely gifted in her ability to draw you into a story and immerse you in the POV of her characters. She is never too wordy and chooses her words with the utmost care.

I am NOT a historical romance fan, and I put off reading this for a long time. When it came out on audio and I listened to a sample I just had to have it!

I was not disappointed. The narration coupled with the expert writing are superb. Truly an immersive experience.

The narrator does all kinds of wonderful voices – appropriate to the time and place of the story – and makes you feel like you are watching a movie or something similar. He’s a new narrator to me and I hope to see more from him in the future.

I have to subtract a little bit – one smidge down from perfect – only because I’m not sure I needed the Epilogue with all it’s … completeness. It was very, very touching, but I enjoyed thinking of the lovers in their happy glory and didn’t really need anything else to make me appreciate their love – though it was magnificent.

It would have to be Christian The Crow...so witty.

Yes, the ending was a shock. It brought to light the feeling of true love and finding your soul mate; that life is not worth living without ones better half.

This was a pleasent surprise. The story is heartwarming and nicely put together. Normally i do not listen to a lot of book with a playing time below six hours since i normally find that there is not enough time to tell a completed story in less. But this author manages the task very well. I will be interested in other audio books from her. The narrator is different Than most m/m narrators - older and more distinguished sounding but since it is a story about Two medieval knights it kind of Works for this story adding to the feeling of being set back in time. Worth the credit.

If you could sum up The Lion and the Crow in three words, what would they be?

What other book might you compare The Lion and the Crow to and why?

I haven't read anything like this in the romance genre before!

Which character – as performed by Scott Richard Ehredt – was your favorite?

I liked William the best. I thought Christian acted a little foolish at times.

I've been a fan of the author for 20 years but haven't read any of her romance books. This didn't disappoint. She brings intelligence and good writing to the m/m romance genre. The historical setting feels authentic. It was hard to 'put down', I almost read it in one setting but had to sleep! It'll take me a while to get the scene at the river out of my head ;) Looking forward to reading some of her other titles. My only criticism is that I think it should have ended when they go to the castle in Scotland, but mostly because I like happy endings and would like to picture them living 'happily ever after'.

Great 💘 story with great narration. I would have preferred having an open ended finale but it had a glorious end

My imagination was tickled..

The story had no lags. I was entertained with every chapter. The narrator added depth and character.

If you could sum up The Lion and the Crow in three words, what would they be?

I loved both William and Christian, but if forced to pick one I suppose it's Christian. He was so determined to do whatever was needed to prove his love and admiration.

What does Scott Richard Ehredt bring to the story that you wouldn’t experience if you had only read the book?

He brought the book to life and his voice was perfect for this historical story.

There were several, but the epilogue had me shedding a few tears.

It's not often that a book will move me to tears, but the wonderful story and excellent narration did just that. I cannot recommend this highly enough and I know I will listen again. Without doubt one of the best books I have listened to!

Would you consider the audio edition of The Lion and the Crow to be better than the print version?

What other book might you compare The Lion and the Crow to, and why?

Maybe Greenwode by J Tullos Hennig. They're both very moving and with excellent male leads.

Did Scott Richard Ehredt do a good job differentiating each of the characters? How?

I suppose he tried, but on the whole, I found his narration disappointing

This is a well written and very moving historical romance with two strong male protagonists. I've never had this author before but I'll definitely be on the lookout for more. The only disappointment was the narrator and his inability to pronounce simple words. Castle was sometimes pronounced with either a long or short voul sound, shone became shown, clash became clarsh. That was weird. Still, if you can get past that, it's a book well worth reading.