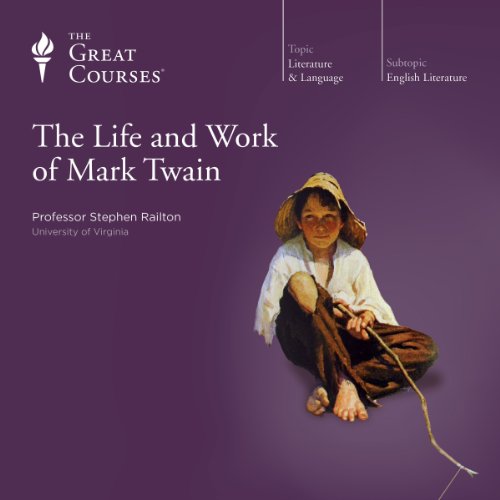 The Life and Work of Mark Twain

Samuel Clemens, the man known to history as Mark Twain, was more than one of America's greatest writers. He was our first true celebrity, one of the most photographed faces of the 19th and 20th centuries. This series of 24 lectures by an acclaimed teacher and scholar explores Twain's dual identities - as one of our classical authors and as an almost mythical presence in our nation's cultural life. The lectures are a gateway to both appreciating Twain's literary achievements and to understanding his life, highlighting seven of his major works - Innocents Abroad, Roughing It, "Old Times on the Mississippi," The Adventures of Tom Sawyer, Adventures of Huckleberry Finn, A Connecticut Yankee in King Arthur's Court, and The Tragedy of Pudd'nhead Wilson - each replete with the issues that most interested and concerned Twain over the course of that life.

But you also learn that there are even deeper depths to explore. Although Twain may have died a widely beloved figure, he himself once wrote: "Everyone is a moon and has a dark side that he never shows to anybody."

Professor Railton shows you that in his private life, Samuel Clemens struggled with doubt, disappointment, despair, and an increasing misanthropy that was greater than any contained in his most sarcastic satires. Even his closest friends almost lost patience with his rantings on how to exterminate what he called "the damned human race."

Dr. Railton also explores in some detail the unpublished manuscripts, discovered after his death, that reveal this dark and despairing side of Mark Twain. They include such partly completed works as The Enchanted Sea Wilderness, The Great Dark, and Three Thousand Years Among the Microbes.

What listeners say about The Life and Work of Mark Twain

WHAT DRIVES A GREAT MAN

This Audible offering from The Great Courses gives a great overview of some of the life and much of the works of Mark Twain. Professor Stephen Railton, the narrator takes the listener down the river of life of one of America's great novelists and essayists, Samuel L. Clemens, more popularly known as Mark Twain. Stephen Railton's discourse on the meaning of some of Twain's work is very enlightening and helps the listener see that what one reads of Twain is really autobiographical and it is an insight into Twain's psyche. Each chapter is presented with a clarity that makes it interesting and understandable. My only negative is that there was not enough biographical information provided about those closest to Twain, his family, especially his wife and children. If you are a fan of Mark Twain I can recommend this Audible offering.

Narrator seems to be reading off the page as if from the first time. almost seems like he's losing his pace sometimes. a very difficult listen

Wonderful you to should listen

It was very informative to learn about Mark Twain. I have started to listen to Innocents Abroad. Great refresher and I learned many things that were new to me. Look forward to many more great courses lectures.

I find that this course fills in the gaps

A consummate and loving tribute to the Belle of New York, the Belle of the America, disguised as a lecture. Required listening for all fans of Mark Twain! Thank you, Professor Railton, for bringing Mark Twain even closer.

Eliminating the introduction in the beginning and the applause after each segment. This is unnecessary and really annoying.

Has The Life and Work of Mark Twain turned you off from other books in this genre?

I would like to listen to the material without the interruptions.

Would you be willing to try another one of Professor Stephen Railton’s performances?

Not unless you delete the interruptions.

I really like the great courses and the material, I just hate the interruptions.