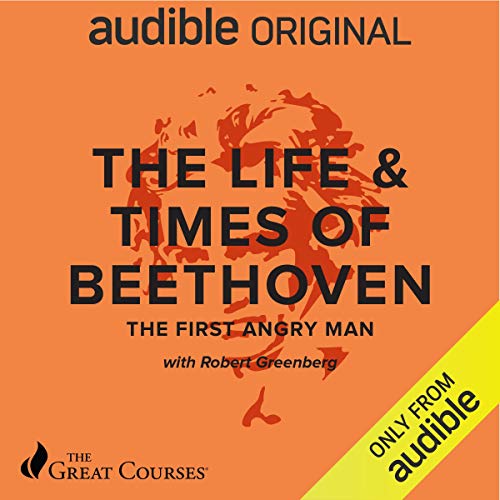 The Life & Times of Beethoven

In The Life & Times of Beethoven, celebrated composer and music historian Professor Robert Greenberg of San Francisco Performances gives you a unique perspective on a musical genius the likes of which the world had never seen before - or since.

Blending biography, history, and music appreciation, these 10 lectures portray Beethoven’s extraordinary (and still modern-sounding) music as a direct outgrowth of his life, environment, and interior emotional landscape. What makes Beethoven’s anger so special is that he was the first composer to portray his own raw (sometimes even violent) emotions directly in his music. As a result, for more than 200 years, works like his later quartets, his Hammerklavier sonata, and his Symphony No. 9, have moved, touched, and sometimes even frightened listeners in a manner almost primal.

Professor Greenberg lays bare the links between Beethoven’s life and his incredible output of music. Listeners will learn:

These lectures give an unforgettable perspective of an angry, alienated composer, who, nevertheless, translated personal defeats into musical triumphs.

What listeners say about The Life & Times of Beethoven

summary of Greenberg's other Beethoven courses

An excellent overview of Beethoven's life

The Life and Times of Beethoven is a biography compiled by Prof Robert Greenberg of The Great Courses-fame. As part of the Great Courses you are enticed with an academically well-researched and very interesting course.

However, if you expect music examples, as with most of Prof Greenberg's courses, this course lacks it. It is history, moulded and made interesting. On the upside, while most Great Courses were created as video courses, this course focus on audio presentation. There is no workbook and you can drive and listen.

I highly recommend the course. It is a splendid biography by a heavy weight in Musicology of probably the most famous composer.

For the first 10 minutes or so, the author quoted polls to show how popular Beethoven is today to Classic Music fans. Later, he quotes an historian who believed a good biography of Beethoven needs to be objective and avoid "interpretation." Robert Greenberg goes on to disagree with this historian and lets you know that the next 4 1/2 of this "book" will be Robert's "interpretation." The author tries to use a "female" voice when stating the opinions or quotes of women. It comes across as comical. Within an hour of this "audible" event, I felt that the "center" of this event was not Beethoven; the center becomes, to me, Robert Greenberg. This event becomes, not history, entertainment.

I feel like I actually knew Beethoven, personally, and knew him well, even smelled him, after listening to this brilliant series. Great job, Professor Greenberg.

all talk no music

constantly pitching his other books the lecturer shouts, doesn't play any of Beethoven's music. awful

The description implied that there would be analysis of the music. That is why I purchased this series. 10 minutes in he’s explaining how to buy his CD’s.

I can’t express how disappointed I was.

Would make an amazing movie

This story, with the narration that only Robert Greenberg could provide, would make the best mini-series ever, on par with Roots. If you are looking for a great biography of Beethoven, go no further. This is the one to listen to.

I've listened to nearly all of the Great Courses by Robert Greenberg and he has delivered once again. Audio clips of the music would have been a plus and I would have paid more to hear them. Otherwise everything was great and I would encourage everyone to listen to this course.

Another Hit from Dr. Bob

I was excited to find Robert Greenberg on Audible; it did not disappoint. Thank you for another great course.

Excellent! material and narration!! And here is my necessary ten more words to go.

Dr. Bob, the Mae​stro, succeeds as usual, deploying awesome presentation skills and using his extraordinarily gifted talent as a storyteller. I've been a fan for nearly two decades. This is the first presentation I've heard where Dr. Bob does not use excerpts of music during the presentation. I think his not doing so lends emphasis to the biographical nature of the subject. Well done!
Keep 'em comin' Doc. I love being the kid from a deep Brooklyn 'hood with a genuine love for, and conversant knowledge of (Thanks to you!) concert music. You da MAN!!

interesting but no music

I enjoyed this once I'd got over the disappointment that it was not accompanied by any illustrative music.

Packed with detail but the story flows very well. Clearly written by someone at the top of their game. Well worth a listen.

Interesting, informative and thorough. Well read by the very erudite author. Plenty to like