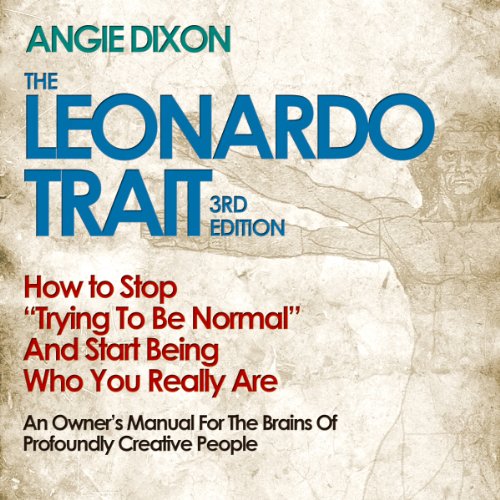 The Leonardo Trait introduces, expands on and coaches readers through living the idea that profound creativity, multiple passions, and saying yes to everything and to life are incredibly normal and not an aberration. While not everyone shares this way of thinking and living, many people do - and The Leonardo Trait is a user manual for these people and the sometimes frazzled and confused “Straight Liners” who love them.

The Leonardo Trait is an audiobook for creative people who feel that their creativity is not just unusual, but bizarre, or even sometimes a little crazy. These are the people who are embarrassed by their brains at times - and there are far more of these people than “Straight Liners” realize. We recognize each other, and we’re always relieved to know we’re not alone. That’s the purpose of The Leonardo Trait, in fact - just to say, “You’re not alone and there’s nothing wrong with you.”

Angie Dixon has done a huge number of things, from working at McDonald’s to running award-winning websites to photographing pets, and everything in between. However, for nearly five years she has focused most of her time and attention on developing the ideas in The Leonardo Trait, and writing the second edition of this audiobook.

What listeners say about The Leonardo Trait, 3rd Edition

not the best first impression but stick with it

It's probably appropriate that this was an audio book on a device I haven't fully mastered yet because I might not have finished it otherwise. It was informal to a near internet forum degree but if you stick with it you will find many nuggets of good life advice and information and that's the most one can expect from any book.