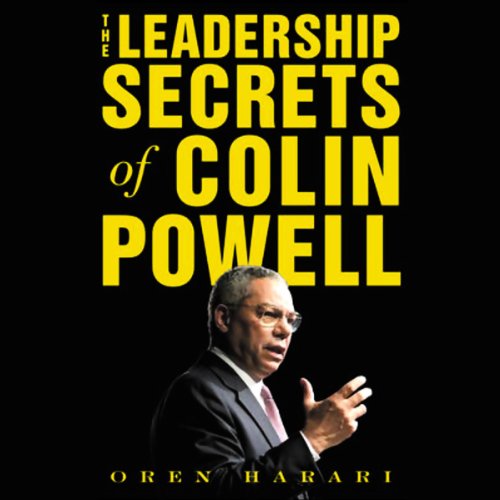 The Leadership Secrets of Colin Powell

The Leadership Secrets of Colin Powell

Colin Powell is the classic American success story. Born in Harlem to immigrant parents, Powell rose through the ranks of the U.S. military to become chairman of the Joint Chiefs of Staff and a soft-spoken, steel-willed Desert Storm hero. Always seemingly one step ahead of both allies and competitors, he quickly became one of America's most trusted and beloved public icons, acknowledged for his courage, his compassion, and his ability to forge victory under the most trying circumstances.

The Leadership Secrets of Colin Powell recounts Powell's core beliefs on leadership, negotiation, self-knowledge, and more. Based on an article written by Oren Harari after Harari met Powell and heard him speak, an article so compelling that it became the subject of a front-page feature in the Wall Street Journal, this leadership primer reveals the secrets and insights that made Colin Powell the success he is today. Short, snappy, and packed with Powell's depth and spirit, it will help listeners inspire anyone to achieve extraordinary performance.

"Harari has done an admirable job of distilling the essence of Powell's leadership style." (Publishers Weekly)
"This is a 'battle-tested' leadership book...you don't have to be a CEO to benefit from the words and wisdom of Colin Powell." (Booklist)

He's right but not a big surprise

I like what I see about Powell as a leader. The book is clearly written and the style is OK. But there is nothing fundamentally new here for those who have been practicing leadership for a while. It may be an excellent book for those just getting started as leaders. Those who have been around the track once or twice will find this to be a rehash of the usual management book yada yada.

Great book; almost too much info. Read it for the culture of Powell, not the specific lessons.

I am certainly glad I took the time to get through this audio book. for once in a long time I wish I had read the hard copy, highlighted and skimmed what I could. the author repeats his points of focus way too many times. a short version of Powell's methodologies tactics and beliefs would have been easier to follow in my opinion
chptr 11 : best description of the meaning optimism I have ever heard. that was my favorite part

Such a great leader with lots of experience. But this book was Kind of boring and dry at times. No memorable stories. Took me 3 days to finish. Yawn...