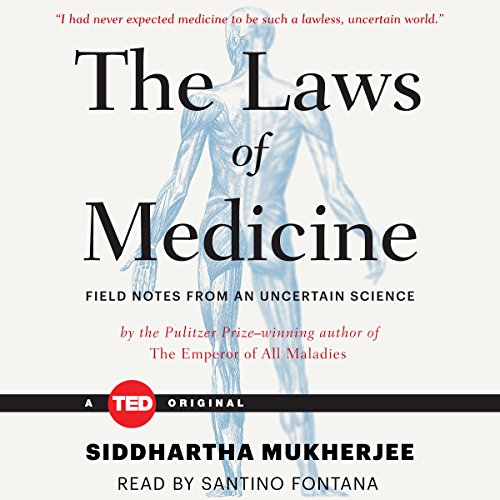 The Laws of Medicine

Essential, required listening for doctors and patients alike: A Pulitzer Prize-winning author and one of the world's premiere cancer researchers reveals an urgent philosophy on the little-known principles that govern medicine - and how understanding these principles can empower us all.

Over a decade ago, when Siddhartha Mukherjee was a young, exhausted, and isolated medical resident, he discovered a book that would forever change the way he understood the medical profession. The book, The Youngest Science, forced Dr. Mukherjee to ask himself an urgent, fundamental question: Is medicine a "science"? Sciences must have laws - statements of truth based on repeated experiments that describe some universal attribute of nature. But does medicine have laws like other sciences?

Dr. Mukherjee has spent his career pondering this question - a question that would ultimately produce some of the most serious thinking he would do around the tenets of his discipline - culminating in The Laws of Medicine. In this important treatise, he investigates the most perplexing and illuminating cases of his career that ultimately led him to identify the three key principles that govern medicine.

Brimming with fascinating historical details and modern medical wonders, this important audiobook is a fascinating glimpse into the struggles and "eureka!" moments that people outside of the medical profession rarely see. Written with Dr. Mukherjee's signature eloquence and passionate prose, The Laws of Medicine is a critical book not just for those in the medical profession but for everyone who is moved to better understand how their health and well-being are being treated. Ultimately this book lays the groundwork for a new way of understanding medicine now and into the future.

What listeners say about The Laws of Medicine

Siddhartha Mukherjee is a gifted story teller, a clinician who can navigate with utmost ease, zooming in and out of the daily practice of clinical medicine. His observations regarding practice of medicine in this book are insightful and provide a wholesome perspective, useful to a medical student, intern or a resident to shape his approach to medicine.

However, compared to the expectations set by Dr. Mukherjee's previous work The Emperor of all Maladies, the current book may not be of as much interest to a general (non-medical) audience.
At times the narrative seems to repeat- both in thoughts and quotes from the previous book. The "conclusions" that are drawn in this book from observing the patterns in clinical practice, are many a times so "obvious" to a clinician that the book may fail to stand to its own promising nomenclature as "the laws" of medicine.

I really enjoyed this book. The reading was excellent and the content was insightful. I am a scientist by training and it was enormously helpful to hear the approach of a clinicians to complex problems like human diseases and treatments. If you’re interested in medicine or problem solving in any capacity, I’d recommend it.

Very well written by the master author of Emperor of Maladies. My rec is to have Mukherjee himself narrate this for real and maximum impact.

essential reading for anyone who cares about the present and future of medicine. written very well and a joy to listen to.

great observations about where medicine stands today. This is an accessible quick read worth the effort

Even great writers have let downs.

I have read some of the authors books. This one is not as informative. Basically the message is that doctors often do not know what they are doing because they have little scientific studies that proves or nullified what they are doing. It is often a hit and miss process with quite a few failures that medical doctors would believe would be helpful. One of the best examples was the long belief that radical mastectomy were the only way to help women with breast cancer. 1000new if not hundred of thousands of one had it done to them in the past. According to the author they are a!most never done today.

I am again impressed with Mukherjee as a thoughtful, insightful man. As a fellow physician I readily agree with the points & insights made, as true
I also gained a glimmer of understanding Bayesian Stats for the first time..

It should be considered a prologue of a book. It is too short for a book.

No. That is preposterous. Not surprised that this was produced by TED. What a joke. I had just finished Robert Caro's The Power Broker, which was 65h and one of the best books I have ever read. This is < 2 and costs the same amount? In what universe does that make a lick of sense??

The author's musings are interesting, and there is material here to make this worthwhile, but, it's ultimately the little blurbs that are good: Tycho Brahe and Kepler, the section on Radical Mastectomy, but the central ideas and premises, sadly, are too sketchy to be recommended. At first the author seems to be saying medicine is bound by the laws of information theory and bayes (YES!), but then those topics are just side-swiped to put out a sunny smiley face on how much progress we are making in doctoring. Last I checked, we are almost bankrupt from health costs, doctors are depressed, and we are getting atrocious outcomes.

We do need more thinking on the merging of philosophy and science.

short but very nteresting and thought provoking book. highly recommend. it tells a tale of science from a personal perspective and gives a uniquely personal view