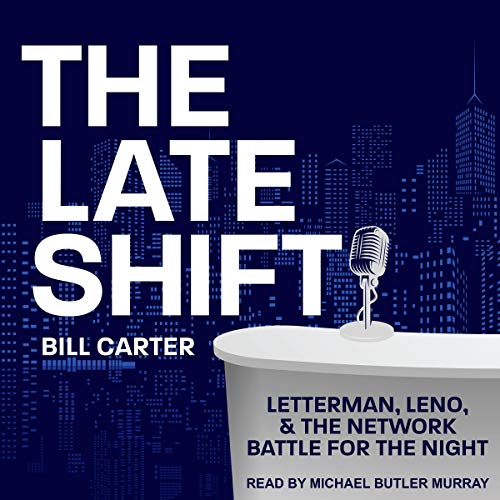 When beloved host Johnny Carson announced his retirement after 30 years on The Tonight Show, millions of Americans mourned. But inside the television industry, the news ignited a battle between two amazing talents - Jay Leno and David Letterman - who both yearned to occupy the departing legend's chair. For NBC, it would be a decision with millions of dollars at stake.

Soon these two comedians with strikingly different styles, who had once shared a friendship as they worked the clubs together, would be engaged in a fierce competition for the prize.

Based on in-depth reporting and interviews with those involved, and updated with a new introduction by the author, The Late Shift is a "vivid, behind-the-scenes, blow-by-blow account" of the fight that ensued, as stars, agents, and executives maneuvered for control of the most profitable program in TV history (Chicago Tribune).

What listeners say about The Late Shift

"The Late Shift" is thorough and complete. While, the movie of the same name and subject matter is splashy, engaging and quite interesting. This audiobook is that much better! This book explains the character of all the characters involved in this very public behind the scenes drama for the battle for nightly viewership in the mid-90s. This book while comprehensive on the subject, doesn't have any drag. The choice of narrator is a perfect compliment. "The Late Shift" is well worth your time!

If you’re interested in this subject you will love this book. It captures the topic perfectly and cleverly weaves the story together for a solid flow.

The narrator for this book is perfect. His delivery is exactly what is needed. I don’t recall a more ideal mix of narrator:story in my audible listening history. L

Fantastic book. You might think a topic like this could be a little dry but this had all the pace of any page turner. Was completely fascinating from start to finish. If I’m quibbling one minor point I would have liked to have heard a bit more about the fall out from hosting the Oscars but beyond that this has every insight on the subject matter you could hope for. Easily one of the best books I’ve listened to on Audible.

Now please give us the audiobook of "the War for Late Night" by the same author. And use the same narrator.