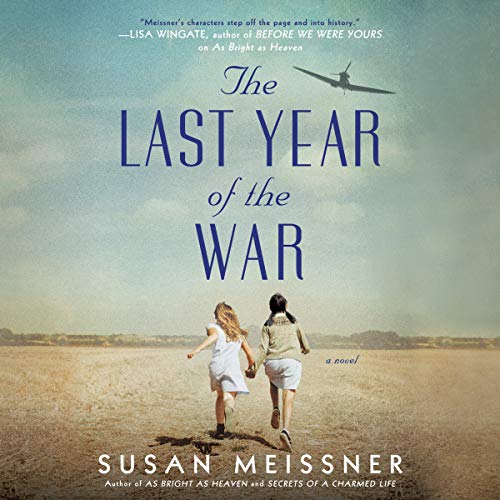 The Last Year of the War

From the acclaimed author of Secrets of a Charmed Life and As Bright as Heaven comes a novel about a German American teenager whose life changes forever when her immigrant family is sent to an internment camp during World War II.

In 1943, Elise Sontag is a typical American teenager from Iowa - aware of the war but distanced from its reach. Then her father, a legal US resident for nearly two decades, is suddenly arrested on suspicion of being a Nazi sympathizer. The family is sent to an internment camp in Texas, where, behind the armed guards and barbed wire, Elise feels stripped of everything beloved and familiar, including her own identity.

The only thing that makes the camp bearable is meeting fellow internee Mariko Inoue, a Japanese-American teen from Los Angeles, whose friendship empowers Elise to believe the life she knew before the war will again be hers. Together in the desert wilderness, Elise and Mariko hold tight the dream of being young American women with a future beyond the fences.

But when the Sontag family is exchanged for American prisoners behind enemy lines in Germany, Elise will face head-on the person the war desires to make of her. In that devastating crucible, she must discover if she has the will to rise above prejudice and hatred and reclaim her own destiny, or disappear into the image others have cast upon her.

The Last Year of the War tells a little-known story of World War II with great resonance for our own times and challenges the very notion of who we are when who we’ve always been is called into question.

“Meissner has created a quietly devastating story that shows how fear and hatred during World War II changed (and even ended) the lives of many innocent Americans.” (Kirkus Reviews)

“A beautifully poignant tale, The Last Year of the War explores the complexities of love, friendship, and the fleeting truths of identity. With vividly drawn characters and ever-elegant prose, Meissner highlights a dark, often-overlooked piece of American history. This timely novel will stay with the reader long after its thoughtful, heartwarming conclusion.” (Kristina McMorris, New York Times best-selling author of Sold on a Monday)

What listeners say about The Last Year of the War

Historical Fiction at its Best!

Susan Meissner's latest book does not disappoint. Wonderful storyline and narration. You see the second World War from the perspective of the children of those ethnic groups deemed "enemies" of America and sent to a detention camp in Texas. Told through the eyes of Elise, born in Iowa to German parents, and her friendship with Mariko, a Japanese American girl who she met while they were both in the camp in Texas. Starts in present day, 82 year old Elise begins her search for Mariko.....through her search we hear her memories and gradually piece together their stories and the power of friendship. As always, through reading historical fiction, I learn so much more history that I did not know. If you enjoy historical fiction then this one is for you. Highly recommend.

The beginning was really slow, but it kept getting better and better. I Loved it!

This was such an amazing journey with an absolutely perfect ending. I laughed, I cried, I felt heartache, and joy. I learned so much about World War II. There isn’t one single thing that I would change about this story. It was perfect in every way. This is one of the best books I’ve “read” in a very long time. Also the narrator was wonderful, I felt like I was actually in the story. I 100% recommended this book, whether you are a fan of history or not. Also, If you decide that you love this book, make sure to check out As “Bright as Heaven” by the same author, which takes place during the Spanish flu of 1918. Another amazing historical fiction! I am new to Susan Meissner, but she is definitely one of my new favorites!

I love a good historical fiction. I loved learning about the Japanese and German internment camps. It brought a whole new perspective on this time in history. The story was told well and kept me wanting to read more. The story also ended really well I feel that there is no need for more books. My only complaint is that the narrator read the book without much voice inflection. She also read very slowly. I ended up speeding the narration by 1.25. Overall I would definitely recommend this book.

Another wonderful story by Susan

I knew about the Japanese being interred, but not the German’s. You will not be sorry you listened.

The Other Side of The Story

So much I did not know...... I enjoyed and carefully listen to every chapter of this book! I had read about German women suffering in post war Germany in the hands of Russian soldiers..... War is terrible for everyone, terrible consequences become of every war. But I consider the way the AUTHOR introduces the reader in the life of the Sontag family most awesome, you forget you are not one of them.... It made me become emotional in many chapters , and specially left me thinking a lot, once I finished. I strongly RECOMMEND TO READ OR LISTEN TO THIS BOOK! Also the NARRATOR is very good!

When I realized that this was going to be a narrative of the main character’s entire life, I decided it was too long for my book club selection. Yet the fascinating segments of life in a Texas internment camp just a few miles from my family’s ranch property was a fact I never heard about from my father for my entire life! I never knew German-Americans were interned as well as Japanese. Also the protagonist’s life back in war-torn Germany was eye-opening and tragic. I was a bit disappointed with the friendship story. Alas mental deterioration added too!! And communism! Possibly a little too may story-lines for one lifetime/book. The narration was first class!! A good read for an extra long trip or month-long commute.

Drew me in and kept me there throughout

I loved this book! I never really knew much about the internment camps, only that they existed. I never knew that German Americans were interned in addition to Japanese Americans. I never really considered what life would have been like in those camps or after having been sent back to Germany or Japan while the war was still on. This book provided a great opportunity for reflection and for learning about what went on right here in America during WW2 that was only mentioned in a few sentences in our high school history books in the 1980's...

Slow in getting started

I love this author's works and currently I'm reading World War II books so this pit in just perfectly each book brings with it A New Perspective on the war that I never heard of. As a Japanese-American I am very familiar with internment camps but had never heard of Crystal City nor the Germans who are interned there