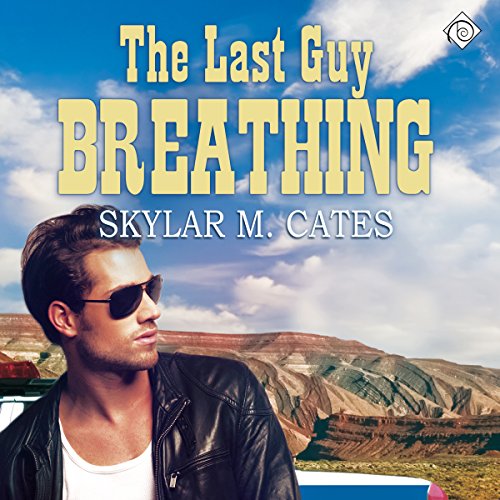 At a friend’s wedding, Henry makes the mistake of an impulsive sexual encounter.

Henry hates Deputy Locke now and sees him as an enemy...or does he? He has since returned to his home town and must deal with Locke on a daily basis. Forced to work together to solve a mystery, Henry finds himself in a fake relationship with the arrogant cop.

Locke believes Henry is sheltered and spoiled. Unlike Henry, Locke grew up poor and had to fight for all that was his. Their secret and steamy past encounter adds to the animosity, but the white-hot passion between them is hard to resist. The chemistry between them is undeniable, though they are afraid to risk their hearts.

Can two stubborn men admit they both want a happily ever after?

What listeners say about The Last Guy Breathing

What a wonderfully, fantastic story. Though I have not read any of the others in this series, I adore Henry and Locke. The build-up to their relationship was tantalizing, taunting, and titillating...the basic three "t's". For me, Skylar M. Cates, presented the two characters in such a way that I could relate to both of them and I felt for both of them. I remember being Henry, so sure that my body image was the reason I couldn't find love; as well as understanding Locke's sense of not being good enough. I am a good guy, that like's to be a bit bad! The two are perfect together and I think that Cates did an outstanding job telling their story. I also enjoyed the mix of intrigue and mystery...it added to the story. The secondary characters also added to the mix and I found myself drawn toward James and Ron...feeling for them. Which is a good sign of a wonderful author. Now for the narration by Matt Baca...LOVE HIM!! His vocal inflections provided a visionary connection between the characters and the reader. I will look forward to listening to him in the future! Which is going to be soon because I am going to start listening to the rest of this series...Definitely would recommend...excellent author and fantastic narrator!

Omg!! I loved loved loved this book. My favorite of the series hand down if I could give it 10 star I would!! & Matt Baca what can I say?? I have a crush on his beautiful voice, he only made me love the story more. I really hope he narrates more books I long to hear his sexy voice some more in future books. ::sighs::

This was a love story of a cop who is afraid of commitment. meets a guy who don't do hook ups. They compromise for a criminal case and realize they have more in common than they think. Worth the credit.

Henry and Locke seem to be odds from the beginning and despite an explosive moment they don't seem to be hitting it off. But when they start to work together on a criminal investigation. As they work on the case they both realize that things aren't what them seem on the surface. Things aren't easy when two stubborn men work together.

Outstanding in the genre

This book is of unusually high all-around quality: believable characters and a detective story (that is actually quite good) rolled into one, sprinkled with hot sex scenes (wait for the handcuffs!) and a convincing and satisfying conclusion. The narrator is perfect, never misses a beat. Highly recommended.

If I'm objective, and take out my own issues with this story, the rating is 3.5 stars.

Subjectively, this will be going onto my "Hated It" shelf. This is a story that pushed so many of my rage buttons it's really not even fair for me to rate it. So take my rating with a grain of salt.

Because I am firmly, FIRMLY, in the minority with this. And, hey, it could have just caught me on a bad day, because I cannot tell you the number of people I know who RAVE about this story and think it's the best in the series so far. I am just NOT one them.

Obviously. Even Matt Baca's narration, which I usually enjoy, grated on me this time around because of how much I was disliking the story. *sighs*

My favorites out of the series.

I loved their snarky relationship moments. Most of the time when writers try to create these "contentious" relationship they end of either lame-where they make up in 5 minutes or you wonder why they are together at all. But she did it really well, I thought. There was a slow build to liking to caring to loving, even though most of the action takes place over fairly short period of time.

My least favorite thing is probably the same complaint I've had with all three books (although less so with this one) is that the ending feel a little anti-climatic. But I think she maybe going for a more realistic feel-without things wrapped up in a bow. It it does feel a bit like a balloon being blown up throughout the book but instead of pop it slowly deflates.

Have you listened to any of Matt Baca’s other performances before? How does this one compare?

He narrates the other two in the series. He does a good job. Distinctly voices and non-annoying women's voices-which is sometimes an issue.

My favorite of the series so far!

Henry is an accountant who moved back to Glamour to help his widowed mother. He used to be chubby and now strives hard to keep his new, more fit shape. His dad was a giant jerk, and he’s had real rotten luck with relationships. Until now.

Locke is a hard-nosed cop who moved to Glamour when he got in trouble for whistle-blowing in Phoenix. His family life was also less than stellar and the only family he knows now is his younger brother. He’s gay, but not out and he doesn’t “do” relationships. Until now.

Locke and Henry get together for the first time at Dean and Anthony’s wedding. (Yay!!!) They have a hot round of sex then Locke treats Henry like crap and they don’t see much of each other except when Locke is handing out speeding tickets to Henry.

There is a suicide and a subsequent investigation into the woman’s place of work, which happens to be where Henry works, conducted by Locke’s police department. It’s decided that Locke and Henry must pose as lovers to gain inside information about the financial planners Henry works for to try to expose the cause of the suicide.

At first things are terrible… well terribly HOT… between Henry and Locke. The sexual tension is nearly unbearable, but outside of the physical, they can’t stand one another.

As they work closely with one another on the case, little by little the defenses crumble and they begin an active “no strings” affair… but Henry is seeing strings and maybe… maybe Locke is too.

There is a lot of intrigue. Some family drama on both sides. Lots and lots of hot sex. Some personal drama with Dean and Anthony. Some more hot sex. And finally… a very HEA.

This, by far, is my favorite of the “Last Guy” series. It is a really sweet, very sexy, very exciting, very well-written novel. I can really see the improvement, book to book in Skylar Cates’ writing. Her characters are by far her best asset – they are interesting and well-developed and easy to love, both the MCs and the secondary characters as well.

I think the story line in this was by far the most interesting of the three, the mystery and the drama and all the extra stuff that can sometimes overwhelm a romance really did a nice job of show-casing the romance and keeping the reader enthralled.

I am a definite fan of the series and hope we see more from Skylar soon!

Matt Baca did the other narrations for this series and like the author’s writing, this is the best of the three. I really like his grumpy Locke and his sweet Henry.

Loved it but not as much as the first in the series maybe because Lock was very unlikeable at first. One of my favourite narrators so far.