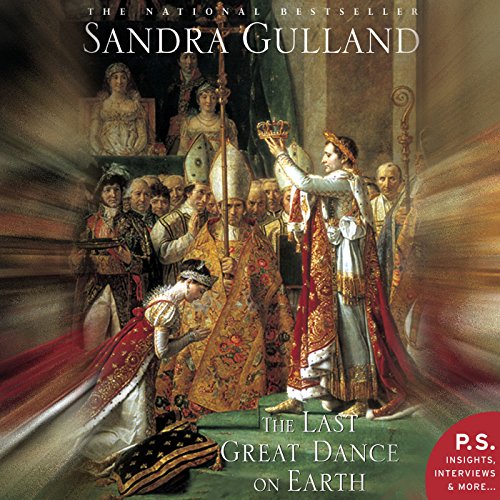 The Last Great Dance on Earth

The Last Great Dance on Earth is the triumphant final volume of Sandra Gulland's beloved trilogy based on the life of Josephine Bonaparte. When the novel opens, Josephine and Napoleon have been married for four tumultuous years. Napoleon is Josephine's great love, and she his. But their passionate union is troubled from within, as Josephine is unable to produce an heir, and from without, as England makes war against France and Napoleon's Corsican clan makes war against his wife.

Through Josephine's heartfelt diary entries, we witness the personal betrayals and political intrigues that will finally drive them apart, culminating in Josephine's greatest tragedy: her divorce from Napoleon and his exile to Elba. The Last Great Dance on Earth is historical fiction on a grand scale and the stirring conclusion to an unforgettable love story.

What listeners say about The Last Great Dance on Earth

This is the first audible book for me and the third in this series about Josephine Bonaparte.
Starting audible on book 3 may have colored my opinion.
I did not care for the voice changes for the characters, I almost quit listening because of that. But since I didn’t have time to actually read the book I continued to the end —all the while being bothered by the voice.
That said the story was excellent and if I continue to read more audibles- I probably just need to get used to hearing one voice try to play different characters.

Loved these 3 books couldn’t stop listening. Didn’t know how much i didn’t know about the history of Napoleon and loved learning. The story engulfed me i didn’t want it to end.

The third book was every bit as good as the first two. The narrator was the same for all three books. She was very good.