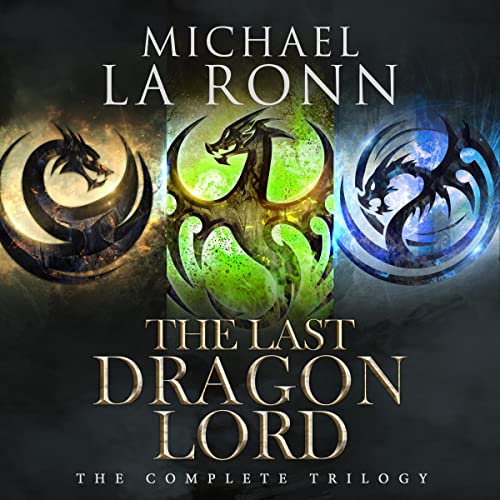 He's a supreme dragon lord at the height of his power, but there's a conspiracy brewing.

Old Dark is a viperous dragon lord who rules the world with brute force. For 200 years, he and his dragons have terrorized humanity, forcing it to pay tribute or die.

Dark's palace of blood and bone sits on caverns of treasure. He's stockpiled all the world's magic for his own personal use, making him akin to a god.

There is another dragon in Dark's inner circle who wants Dark's power and fortune for himself. And if Dark doesn't stop his own overthrow, he'll suffer a fate far worse than death.

But Dark won't fall easily. There's a reason the ancients called him Dark the Wicked....

This is a different kind of dark fantasy, told through the eyes of a blood-thirsty dragon. Listeners who like antiheroes, the Age of Fire series, and Smaug from Lord of the Rings will love this heart-pounding story of power, revenge, and true evil.

What listeners say about The Last Dragon Lord

This is the firs to thirdt book I’ve read/listened to by this author and I would listen to another. What an interesting mix of magic, dragons and technology. Im so glad this was given as a boxed set.
There is even a thread of mystery since we have insight into Dark’s life when he was in power and then after he’s reanimated. Someone killed his parents, someone tried to kill him. Through his introduction to the current world, it’s technology, environmental issues, and it’s decline from the magical world he recalls, we learn much about his motivations. The “all terrible” Dark is not so all terrible. His motivations not pure evil, his feelings not all malevolent.

This is the first book I’ve listened to by this narrator ( Miles Meili ) and I would listen to another. He uses accents and cadence to his advantage to differentiate characters, and he also imparts each one with personalities.

Now that Game of Thrones os over, I needed my dragon/fantasy fix. This achieved it. I liked the different voices that the narrator (I think his name is Miles) did for different characters. It was well written and I really enjoyed it. It sure made sitting in traffic a lot more enjoyable!!!

Definitely an interesting premise and story. I love the idea of an evil protagonist, and the narration was excellent!

I received a free copy of this book and am writing this honest review of my own volition.

This is an epic story in it's all glory with an age old dragon war for power with "defenseless" humans and other magical creatures in the middle. I do recommend to read the full trilogy as there are not big pauses in the story and there are also short "intermezzo" stories between acts that may, or may not, be in the individual books as they are separate from the may action and characters.
As for the story itself I like it a lot, but the sifting of point of views made it difficult to take a side (witch was probably the point).
I just though that the analogies and reflections with our reality could have been more explored.
Still, the world building is amazing and that was for me the strongest point, right along side with the narration. The narrator has done an amazing job and only suffers sometimes when the writing style called for a bit longer inner monologues from the characters or simple contextual narration.
In the end, not the best story of it's genre but very good still.

This was one of the more fun books I had listened to. The story was good and entertaining. I continued to feel bad for the main character

I was given this book for free in exchange for an honest review.

This is the complete trilogy and it's loaded with value! It's a bit dark, but not overly so. And I mean, come on, dragons. If you like dragons and revenge plots, this one is for you.

Not a bad dragon series

It's been awhile since I read/listened to a dragon tale. This one implemented some new views and dynamics I found to be quite interesting. Abstraction and the way magic works come to mind. Very easy to listen to and the narrator does a great job with the voices. I recommend this if you are searching for dragon book.

Good from the prelude to the end.

** I received a free copy of this book for review purposes, my review is voluntary and unbiased **

This book gets your interest and holds onto it. There weren't any periods in the book where I felt there story was dragging, the lore of the world is built organically as the story unfolds, there was very little in the way of exposition dumping and when there was it felt like a natural part of a conversation and not like you are being lectured.

The story is really about two major themes. First it follows Old Dark who was essentially the king of the dragons and giant jerk during the dark ages. There was coup, he ends up in a magical coma for a thousand years. He's out to settle a score or three but when he wakes up he is kidnapped and imprisoned by a politician that thinks he may be able to exploit Old Dark's return for his own aspirations...

Second society and technology have advanced in Dark's absence, the humans and elves that have become the dominant species on the planet have abused the worlds resources and magic is being depleted at an alarming rate. It's clearly analogous to deforestation, fossil fuel use, and climate change. It's rare to see a fantasy series take environmental concerns so seriously and then to do it in a way that doesn't feel out of place and forced is nearly miraculous.

The characters where all interesting, even if half of them were assholes. There are very few "good guys" in this book. Most of the characters are self serving and somewhat short sighted, but it never seemed like they were acting out of character,

Miles Meili Did an excellent job. He's a relatively new narrator as far as I can tell, but I expect that he will become one the more well known narrators in the near future.

This audiobook definitely kept my interest start to finish. I particularly enjoyed the authors take on dragons' intelligence and their lifestyle. It was new and very interesting to experience dragons as plotting and scheming, and with very human emotions and aspirations. This book is a combination of politics, family disfunction, magic, friendships, and betrayal.
I thought the narration was amazing, with each character recognizable by a different voice and tone. I enjoyed this book and would recommend it as a fun listen.

enjoyed listening to this collection (talk about waking up to find everything has changed) looking forward to either listening to or read more from this author.