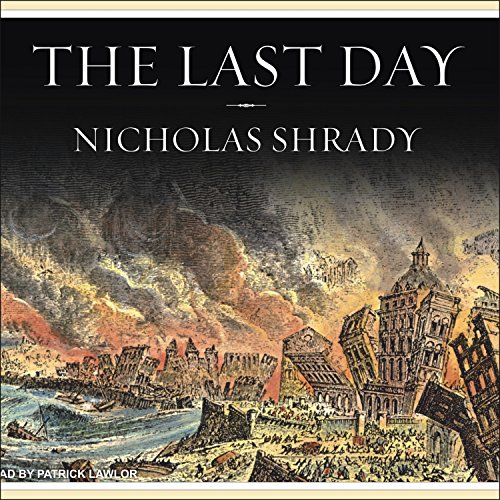 Wrath, Ruin, and Reason in the Great Lisbon Earthquake of 1755
By: Nicholas Shrady
Narrated by: Patrick Lawlor
Length: 6 hrs and 56 mins
Categories: History, European
3 out of 5 stars 3.0 (1 rating)

A riveting history of how the cataclysmic Lisbon earthquake shook the religious and intellectual foundations of Enlightenment Europe.

Along with the volcanic destruction of Pompeii and the 1906 San Francisco earthquake, the Lisbon quake of 1755 is one of the most destructive natural disasters ever recorded. After being jolted by a massive quake, Lisbon was then pounded by a succession of tidal waves and finally reduced to ash by a fire that raged for five straight days.

In The Last Day, Nicholas Shrady provides not only a vivid account of this horrific disaster but also a stimulating survey of the many shock waves it sent throughout Western civilization. When news of the quake spread, it inspired both a lurid fascination in the popular imagination of Europe and an intellectual debate about the natural world and God's place in human affairs. Voltaire, Alexander Pope, Immanuel Kant, and Jean-Jacques Rousseau, among other eminent figures, took up the disaster as a sort of cause célèbre and a vehicle to express Enlightenment ideas. More practically, the Lisbon quake led to the first concerted effort at disaster control, modern urban planning, and the birth of seismology. The Last Day is popular history writing at its best and will appeal to readers of Simon Winchester's Krakatoa and A Crack in the Edge of the World.

What listeners say about The Last Day

Would you be willing to try another book from Nicholas Shrady? Why or why not?

The narrator, and this goes for all narrators, should learn how to pronounce names.

Did The Last Day inspire you to do anything?

As always with history and historic fiction, it inspired me to search the net and find the places and people mentioned. It HELPS if the narrator gets close enough to correct pronunciation to aid in finding the references.

Read this book, skip this listen

I've listened to more than 140 books and this is the first that impelled me to post a review to save others the pain of listening to a truly poor performance that destroys what might otherwise be a well-written book. I'm sure that there's a fair amount of variety in what listeners like in narrators, but I don't think in this case it's a question of taste. Of course the pronunciations are off, but that's the least of the harm, the pacing, tone and, to put it simply, the sound of the narrators voice will limit most listeners to short listens before they have to just turn it off. The story of the Great Lisbon Earthquake is compelling enough to draw you back, but before long you'll find yourself asking how it is that a producer could possibly sign off on this.

Just get the book.

I get it not everyone is familiar with the Portuguese language, but the cringe-worthy pronunciations make this absolutely unlistenable. Surely if you are a professional hired to narrate a book you would at least do a little research on the pronunciations rather than just cracking on and having a go.

Buy the book, skip this audiobook.

The book tells a good story well. The reader’s pronunciation of Portuguese, French, and Spanish is really terrible. You don’t need to know those languages to cringe. However, the book is well worth the listen.

A short historical summary of the impact and aftermath of the Lisbon earthquake of 1755. It is let down by the narrator who struggled with the Portuguese place named and names of people. He opted for Spanish pronunciations which really doesn’t work. He also got a couple of English words wrong. Such as quay. But the book is worth listening to despite that.