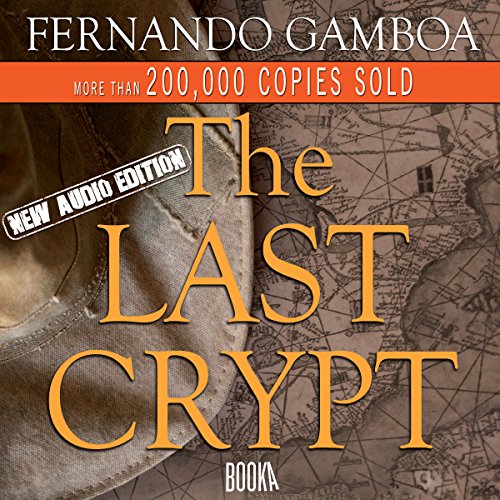 More than 200,000 copies sold. Number-one best seller in Spanish, Italian, and Russian. The best-selling novel in the history of Amazon Spain.

Diver Ulysses Vidal finds a 14th-century bronze bell of Templar origin buried under a reef off the Honduras coast. It turns out it's been lying there for more than one century, prior to Christopher Columbus' discovery of America. Driven by curiosity and a sense of adventure, he begins the search for the legendary treasure of the Order of the Temple. Together with a medieval history professor and a daring Mexican archeologist, he travels through Spain, the Mali desert, the Caribbean Sea, and the Mexican jungle. They face innumerable riddles and dangers, but in the end this search will uncover a much more important mystery - a secret, kept hidden for centuries, that could transform the history of humankind and the way we understand the universe.

Fernando Gamboa (Barcelona, Spain, 1970) has devoted most of his adult life to traveling through Africa, Asia, and Latin America. He has lived in several countries and worked as a scuba diver, a Spanish teacher, an entrepreneur, a poker player, and an adventure guide. At present he's the number-one best-selling indie author in Spain. His books have been translated into Russian, Greek, and Italian.

Long with lots of twists! Really enjoyed it!

Since it was in the era of modern technology, why wasn't a single photo of anything taken?! 😅

Predictable and not great narration

I'm a fan of Templar stories. Of course this one caught my eye. Its easy to guess what's going to happen after you get the gist. I didn't enjoy the narrator at all either. Be sure and listen to a sample before purchasing.

I would recommend this book. The story keeps you on the edge all the way thru

The ending was totally unexpected

Which character – as performed by Joe Lewis – was your favorite?

If you like any of the Dan Brown novels such as the Davinci Code or novels such as National Treasure you will like this. It has many of the same themes such as the Templar knights, intrigue in the Vatican. and a vast buried treasure. Not wanting to spoil the book, I won't give away the ending. Instead of wandering around the cities of Europe, the action is diving in the Caribbean, travelling through Mali in Africa (I had to look that up because I had no idea where Mali was),and the Jungles of Central America. The book moves at a fast pace and is a quick guilty listen.

storyline was disjointed at best, and the narrator is the worst I've come across yet.

A Most Difficult Story

The Last Crypt as a disappointment, yet I listened to the end (with difficulty). Joe Lewis is an articulate narrator, However, the youthfulness of his voice made this story unbelieveable, and a little bit like listening to a high school play. Gamboa, the author, uses old story lines sprinkled with historical legends to pontificate on his own philosophies of life at several points, which is distracting, to say the least. The adventures of the main characters are so improbable, it becomes distracting. The thought to three unprepared people just up and traveling into the Amazon jungle trying to follow a very tenuous set on "clues" placed conveniently within their grasp at just the right moment is so implausible, it becomes most difficult to suspend disbelief, and important part of story telling. I will avoid any further works by Mr. Gamboa or narrated by Mr. Lewis. The last news story at the very end of the book made me smile, but not much else.

listened to this book while traveling. kept my interest and liked the adventure and intrigue.

A simple engaging story. The storyline is interesting, but is written at an adolescent level. The gaps in realism of the journey are glaring and large.

if you love that kind of book...archaeological thriller...fuzzy on details and time lines made to work for a story...which I do! this book may be for you. I enjoyed it . a good use of a credit. please just don't cry after and say "oh...this book stretched details or got this or that wrong? "....it's fiction people!!!

The protagonist was irritating, he whined like a child and was argumentative at the wrong time. The story was ok, but hard to get into when you find that you don't care about the characters. I finished it, but found myself wishing I'd not started it in the first place.