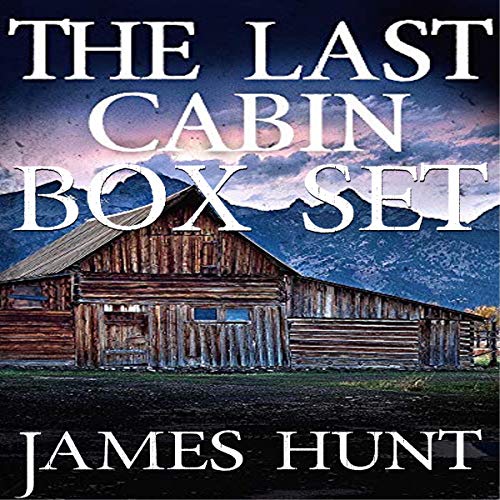 By: James Hunt
Narrated by: Cheryl May, Ramona Master

A cabin on the outskirts of a city becomes the sanctuary for a mother and her two children during the unfolding crisis of an EMP.

Life has hardened Joanna Mercer, and she has spent the past four years since her husband's death preparing herself against the uncertainties of life. After an EMP destroys the nation's power grid, every ounce of that strength will be tested.

When an EMP renders the country impotent, Charlie Decker and a small band of survivors head toward his family's orchard outside of Seattle. But while food and water is abundant, their safe haven becomes a target not just for the enemy, but anyone looking to survive.

What listeners say about The Last Cabin Boxset

I listened to this series from beginning to end. It is Well written and edited. The main characters were well-developed and engaging. The story leaned more towards fighting and warfare rather than day-to-day survival struggles. Thankfully, there was no detailed description of weapons and ammo! A great story overall! Both narrators did a great job! I highly recommend this series.

it's annoying when an author ignores reality, science, math, or just common sense. In the section where the terrorist captured Amelia at the cabin and hauled her off the author seems to have given the terrorist magic Arms of superstring. My understanding was it was two of the terrorists that went to the cap on that trip oh, and while escorting a prisoner, they were able to carry thousands pounds of supplies and weapons from the cabin in addition to the bodies of their fallen comrades, and all them all the way back to the mine. BS, BS, BS! also the premise of this book would have to believe that terrorists had placed tens of thousands if not hundreds of thousands of armed and surgeons throughout the country. what would be the purpose of this? 90% of the population would probably die within the first one to two years. so terrorists would risk the lives of hundreds of thousands so that they could kill hundreds of thousands who mostly with die anyhow? makes no sense, I could see possibly sending an armed insurgents at the end of the first year yeah and it's urgent at the end of the first year to destroy what's left. this would be about like sending in hundreds of bombers with thousands of bombs, to bomb a city an hour before you dropped a nuclear bomb. the author's concept of how quickly the grid could be brought back online is absurdly optimistic. from everything I I have learned about an EMP oh, just the EMT alone would keep power from being brought back online for two to ten years. then you add in the additional damage being done by the legions of terrorists, and based on that premise it seems unlikely power would ever be restored in the traditional grid fashion.