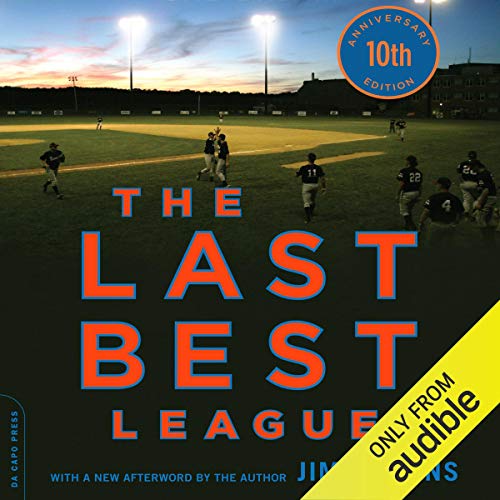 Every summer, in ten small towns across Cape Cod, the finest college baseball players in the country gather in hopes of making it to "The Show." The hopes are justifiably high: The Cape Cod Baseball League is the best amateur league in the world, producing one out of every six major league players.

Ten years ago, Jim Collins chronicled a season in the life of one team: The Chatham A's, perhaps the most celebrated team in the league. Set against the backdrop of a resort town on the bend of the outer Cape, the story charted the changing fortunes of a handful of players battling slumps and self-doubt in their effort to make the league playoffs and, more importantly, impress the major league scouts.

Over the last decade, baseball's hard truths became evident for the Chatham stars who went on to play professionally, and the final chapter of their story can now be written. In a new afterword for the tenth anniversary, Collins explores questions that sports literature rarely touches: What does it mean to devote your life to an almost impossible goal and almost but not quite make it? Or make it only briefly before it slips away? What does a dream look like in retrospect? How does the game look now?

Jim Collins is one of the great storytellers of our time, one mark of which is the ability to tell, in an interesting way, a story in which the reader (or listener) might ordinarily assume he would have no interest. I still recall, many years ago now, reading an article he wrote for the US Airways in-flight magazine on the subject of glass-making, one that I started out of boredom and finished because I was fascinated. (Yes, I pay attention to by-lines; articles, like books, do not write themselves.)

My point? If he can write an engaging article on glass-making, rest assured, he can write a thoroughly delightful book on the subject of baseball.

Though the narrative tells the story of a single season of (arguably) the most-storied team of the Cape Cod League, the Chatham A’s, the brilliance of this book is in the way that Collins, without one entirely realizing it, tells us about baseball. For example, in the middle of a crucial plate appearance for Jamie D’Antona, he breaks into a scholarly disquisition on the history of bat-making, the relative advantages of various types of wood, the evolution of aluminum bats, and the rationale for the “radical” decision by the Cape Cod League to stick with wooden bats. Throughout the book Collins interweaves into the narrative stories of this sort, always with the pitch-perfect timing of a storyteller, someone versed in the oral tradition. And, yes, the story he tells, even for those with no real interest in baseball (I have no real interest in glass-making) makes for a book that is difficult to put down.

Reader interest lies not only in Collins’ ability to tell a story well; in the book, he tells the very human story of a score of young men pursuing their dreams, even those who know that the dream is being snatched away as water from Tantalus. His ability to tell the human side of the story rests on the respect in which he holds these young men and the dozens of people who support them, even when painting an honest but unflattering picture. Anyone doubtful of that trust should be persuaded otherwise by the afterward chapters Collins has written for this tenth anniversary edition; he is able to follow up with these people (both one year and ten years) only because he has remained in touch with them over the years. In the absence of the trust that mutual respect engenders, there is no possibility of follow-up - nor any interest on the writers’ part.

I bought the book because I wanted to hear the end of the story, but re-read it in entirety because it is worth a second read. I chose to listen via audible.com because I was, rightly, confident that Collins’ reading would enhance my experience of it. Whether this is your first time through, or your second, do not hesitate to read this book. Your time will be well-spent.

Of the audiobook, in particular, this is my first experience of a writer narrating his or her own book. Though I had some trepidations - after all, the ability to write well does not necessarily imply the ability to narrate the story well - Collins is such a good storyteller that I assumed this one would be a good bet. His reading of the book is very much worthy of the fine material he has crafted from words. This is not the Jim Norton reading of Ulysses, where my understanding of the book hinged entirely on the elucidation that Norton and Marcella Riordan provide with their voice characterizations, but it is a very good reading of a very good book, one that I recommend highly.

A once in a lifetime chance to experience the journey of college ballplayers as they enjoy the camaraderie of Cape Cod baseball and suffer the realization that baseball is more than a game and sometimes more than their God-given talents can see them through. Both uplifting and heartbreaking, Jim Collins' superb writing allows us an inside look at the most simple yet complex game we all love - baseball.

Who cares? What's the point?

Silly me for thinking Mr. Collins' book was going to inspire me to attend a second Cape Cod Baseball League game. I was hoping for a story about a team of special young men who rallied and won a championship or a coach who put together a ragtag group of misfits and defied the odds and made it to the championship or even a team who came together to support an ill teammate or parent or created a successful charity. This is just an uninspiring book about a poor season which became a mediocre season, a pretty good coach with a decent staff and a few good players. I only finished the book, because I was hoping something wonderful was going to happen.