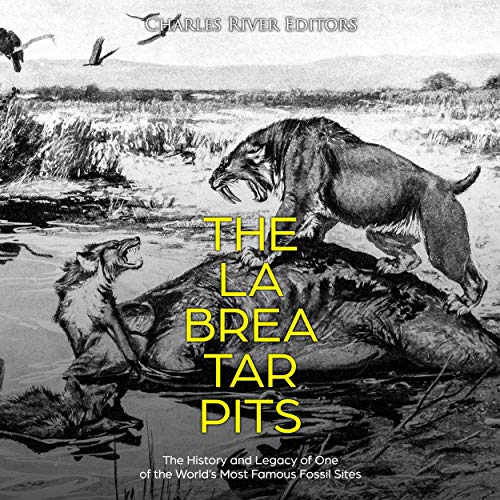 Even at a distance, the acrid stench of asphalt and sulfur singes the hairs of people’s nostrils, and when the blustering winds subside, the potent miasma lingers in the air. To the untrained eye, the La Brea Tar Pits seem to be nothing more than simply pools of thick, viscous black sludge, its obsidian-like surface bestrewn with an assortment of autumn leaves and dirt. Gooey methane bubbles spurt up periodically, shattering the glassy veneer of the grease-black lakes, and the shiny bubbles swell to varying sizes and wiggle from side to side before popping, the sticky collapse almost reminiscent of cracking open a chocolate molten lava cake.

This black sludge might seem rather unremarkable after a few moments, as it appears to just sit there in its idle state, but in fact, the seemingly innocuous bubbles are symptomatic of the treacly dark substance lurking on the bottom of the pit. The pit’s contents have spelled the doom for a countless number of creatures both large and small, from legions of insects to mighty mastodons, mammoths, and snarling saber-toothed cats from the Pleistocene Era. Of course, this is what makes the area a natural landmark in the first place, and today the La Brea Tar Pits are considered by many scientists to be among the greatest finds in modern history.

Technically, these lustrous lakes of ink-black, while branded “tar,” are in actuality pools of asphalt seeps that have remained in place for several millennia, gushing forth from a natural subterranean petroleum spring underneath the city of Los Angeles known as the “Salt Lake Oil Field.” Needless to say, the tar pits are a far cry from the glittering, crystalline ponds cooled by the shade of surrounding palm trees found throughout the City of Angels. Indeed, the pungent reek of asphalt, pulsing methane bubbles, and their hauntingly black surfaces, making it impossible to gauge the true depth of the asphalt abysses, should have seemingly served as clear deterrents to the animals that roamed the vicinity prior to their entrapment. Instead, judging by the treasure trove of bones and remnants that have been uncovered within the pits, the sludge seemed to have figuratively emitted a siren song that no animal, regardless of stature or physical power, could resist.

The disturbing and fascinating implications of the silent death traps, situated in what is now 5801 Wilshire Boulevard, Los Angeles, only further heightens their mystery. Evidence shows that the slow, torturous deaths of many of the creatures who became permanently ensnared in the asphalt quicksand were worsened by passing predators who essentially stumbled upon supper served on a sticky platter. Unfortunate, or rather, clumsy predators sometimes slipped, struggled, and were ultimately swallowed up by the tar pit themselves, creating a macabre, yet natural cycle of death and despair.

Unsurprisingly, the La Brea Tar Pits have also become a wellspring of supernatural legends. According to one such legend, the disembodied, bone-chilling shrieks of a desperate woman, supposedly the La Brea Woman, victim of Los Angeles' oldest cold murder case, can still be heard in the dead of the night. More curious yet, these liquid time capsules are swaddled in another layer of mystique, its fossils not only solving mysterious riddles of a bygone age, but also offering up even more questions that are begging to be answered.

The La Brea Tar Pits: The History and Legacy of One of the World’s Most Famous Fossil Sites looks at the geological origins of the area and analyzes the fossil finds from the tar. Along with pictures depicting important people, places, and events, you will learn about the tar pits like never before."

What listeners say about The La Brea Tar Pits

Loved it! Pretty much nontechnical but a clear history of the entire area, discoveries of the area, ownership disputes, commercial uses for the macadam and seconary oil, and the archaeological finds of the last couple of hundred years. I enjoyed it and learned a lot. Bill Hare is the professional narrator.

more in depth for perfect score

If only it went a bit more in depth about the methods and conclusions of studies.