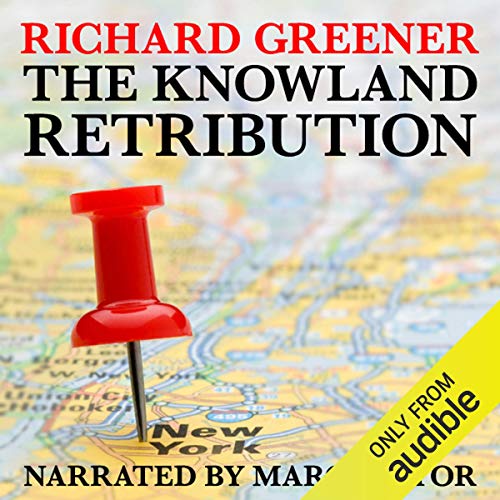 With tainted meat the weapon and corporate greed the motive, The Knowland Retribution is an extremely topical suspense-revenge thriller. Walter Sherman, AKA the Locator, is a tracker who honed his skills in Vietnam. The colorful cast of characters also includes Sherman's two friends - a bartender with a mysterious past and an old black man who smokes like a chimney; a feisty young woman who writes obituaries for the New York Times; a southern lawyer who has lost everything and has only one thing to live for; and a group of Wall Street investment bankers who make a deadly decision.

The action takes the listener from a tiny Caribbean bar on the island of St. John to the editorial boardroom of the New York Times, from the gleaming skyline of Atlanta to the isolation of northern New Mexico, from Adirondack hideouts to Manhattan suites to the Mississippi backwoods.This complex and compelling mystery thriller is the first in a series featuring Walter Sherman as The Locator.

"Greener promises to become a brilliant star in murder-mystery fiction...The Knowland Retribution is a fantastic murder mystery." (Who Dunnit)
"Greener's plot is complex and original...The Locator will find a legion of fans." (The Gumshoe Review)
"Intricate and intelligent. Richard Greener has turned revenge into an art form." (Martin Cruz Smith)

What listeners say about The Knowland Retribution

i found this series through the tv show the finder. which by the way was a great show its currently on netflix. its a shame they just had 1 season. the book is hard to follow at times especially if you cannot devote your full attention to it, it jumps from character perspectives from chapter to chapter and the chapters can be extremely short. i drive while i listen and sometimes i would be distracted and miss the switch. it lead to many rewinds. other than that i found it slow to get into but once i was hooked i was caught!!! i was riveted to this tale. i thoroughly recommend it.and with audible you can feel secure knowing you can return it if its not your cup of tea! the narrator did an awesome job as well!

Would you consider the audio edition of The Knowland Retribution to be better than the print version?

I cannot wait to see if any more of these books are written. I am also disappointed the TV series was cancelled.

Why you should become a vegetarian

"The Knowland Retribution" is an well-written, innovative, intelligent, fascinating thriller. But don't listen to it if you want to continue eating meat. If the description of beef slaughtering doesn't convert you to vegetarianism, then you must be missing a vital organ: a heart. In fact, this novel concerns itself more with corporate greed than with animal rights or dietary wisdom. It tells the story of a man whose entire family is wiped out by E. coli contamination of their beef. When the man, Leonard Martin, discovers that corporate greed both caused and concealed the contamination that killed hundreds of people, he sets out to achieve retribution. Richard Greener ??? the author of "The Knowland Retribution" ??? introduces an unusual protagonist in the person of Walter Sherman, known as The Locator. The action unfolds like an intriguing jigsaw puzzle, in time, geography, and story line. Marc Vietor, the narrator, has a nice voice, and does a good job of enhancing this audiobook. I recommend "The Knowland Retribution" to all thriller-lovers who appreciate intricacy, intelligence, and intrigue in their audiobooks.

too many f bombs

I felt the back story was too long. I could have easily skipped a couple of chapters

I stopped caring about anyone in this book early on. The story drug and never reached anything close to a climax. I won't read the second in the series.

I liked the finder TV show better. The saving grace was the performer, he is an excellent narrator - character voices and all.

I read this because I enjoyed the television show, The Finder. It is substantially different, of course. I enjoyed the show more than the book, but in all fairness, this is not the sort of novel that I generally enjoy. I would not have read a book of this genre if not for having so enjoyed the television show. But that says more about me than the book. It is a very well written story. Just not my taste. Although I do very much like the idea of hunting greedy, evil wealthy people like animals, and killing them. Not that I am suggesting anyone commit any illegal activity.

Not fine literature but an interesting, pleasant read. The writing was solid, evocative. I liked the characters. Motivations were interesting. Go ahead and read it. Unless you're extra picky, you will be happy.

I was hooked on this story as soon as I started listening to it - the plot promised to be intriguing, but by the time I was halfway through the book, I felt the quality of writing began to deteriorate and I was eventually disappointed and offended that the author felt he had to include an unnecessary, gratuitous, and tawdry sex "scene" between 2 of the main characters. I really wish that (a) authors --- esp. male authors -- would realize that a great story is not enhanced in this way and/or that (b) book descriptions indicated some kind of "rating" - a la movie ratings - for this kind of content. I am not a prude or puritan - I just love a good story and hate being desitracted with irrelevant and unnecessary nonsense. On a footnote: I am not adverse to a romantic or sexual connection between characters, but there is no need for it to be spelled out like a porn novel.

If you could play editor, what scene or scenes would you have cut from The Knowland Retribution?

Characters use the F word for no reason. It's like he thought the book would be better if he just tossed in a few. The characters for most part are not believable and boring. They tell Walter to kill the guy and when he comes back and says the guy will go away it they give away all their money they go for it. They would have just hired another guy instead of giving up 30 Billion dollars.