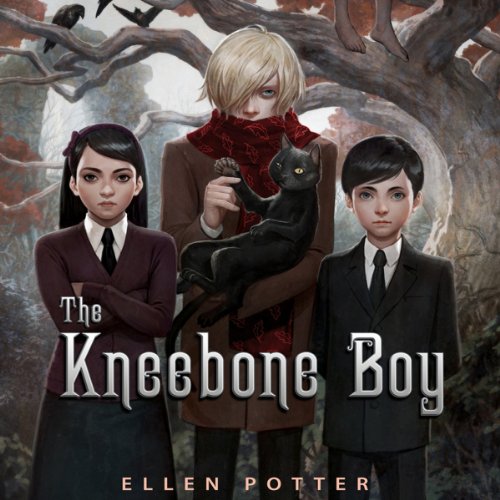 Life in a small town can be pretty boring when everyone avoids you like the plague. But after their father unwittingly sends them to stay with an aunt who’s away on holiday, the Hardscrabble children take off on an adventure that begins in the seedy streets of London and ends in a peculiar sea village where legend has it a monstrous creature lives who is half boy and half animal.

In this wickedly dark, unusual, and compelling novel, Ellen Potter masterfully tells the tale of one deliciously strange family and a secret that changes everything.

What listeners say about The Kneebone Boy

This is a great adventure novel to listen too if your on the bus or drawing or just hanging out. It's very interesting and ends with the BIGEST plot twist I've ever I countered. You really don't see it coming (and when you think you know, you don't!) is recommended this book to anyone who likes adventures and surprises. :)

It's a great book. #luvaudible. Couldn't stop reading! I highly recommend this book, it has a great story!

The story is gorgeous, but I'd recommend buying the book. The narrator was hands down the worst I've ever heard, putting on an atrociously overdone English accent (pronouncing Otto as Auto and atlas as artlars). Her performance was stilted, droning, and overall terrible.

it was Lucia who was portrayed as the author. It couldn't be Otto because they don't know where he is at one point or what he is thinking about their mum and it couldn't be max because he doesn't reveal what he discovered about snoring by the sea on the roof until much later and Lucia was the only one who's thoughts were shown throughout the entire book. so yah.

What disappointed you about The Kneebone Boy?

The narration was awful. At first, we thought it was an automated voice but realised it was a real human after a time. The accent was a mix of Irish, American and Queen's English posh. The lead character was called Otto (but she pronounced it Auto). There were some words that were mispronounced so badly, that we felt maybe English wasn't her first language. One sentence said something like, '...it leaves you feeling a bit bleurrgh', which although isn't an actual word, we all know how it should sound but this author pronounced every letter, which was just bizarre. Unfortunately, what was actually a really imaginative story was totally spoiled but this narrator - it wasn't just once or twice but throughout. I'd recommend listening to a sample before buying. We were on an eight hour journey through France with nothing else to listen to which is the only reason we persevered...but it was truly painful!!

What other book might you compare The Kneebone Boy to, and why?

None, it was quite original and a little odd.

Would you be willing to try another one of Alex Barrett’s performances?

Absolutely not! Never, ever and I can't understand how this was recorded and nobody listened to it before it was released and thought, 'hang on, this is terrible!'

Relief when it was over and a bit of sadness that the interesting storyline was overshadowed.