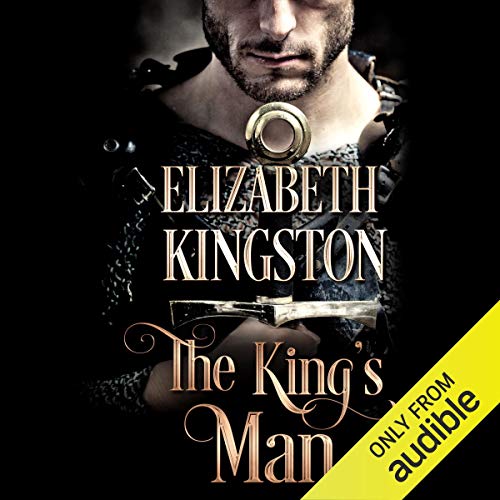 Ranulf Ombrier is notorious throughout England for his skill at swordplay and murderous reputation. But after years of doing his king's bidding, he follows his conscience away from Edward, all the way to the wilds of Wales. Gwenllian of Ruardean, Welsh daughter of a powerful Marcher lord, has every reason to leave Ranulf for dead when one of her men nearly kills him. As a girl she was married by proxy to a man Ranulf murdered, only to become a widow before she ever met her groom. In the years since, she has shunned the life of a lady, instead studying warfare and combat at her mother's behest.

Saving her enemy's life comes with consequences, and Gwenllian and Ranulf are soon caught up in dangerous intrigue. Forced together, they discover a kinship of spirit and a surprising, intense desire. But even hard-won love cannot thrive when loyalties are divided and the winds of rebellion sweep the land.

"I love this book because it's a great, angsty medieval, brought to life in the old school romance tradition. It's got a kick-ass heroine (who isn't a brat) and a dark, brooding hero with a past. It's read by Nicholas Boulton. And we get to hear how those lovely Welsh vowels really sound, in Nick's to-die-for voice. Like many of you, I've been anxious to hear him read fresh new works, and we're making it happen. Enjoy! And be sure to let us know what you think of Nick's performance of Kingston's unique characters in the reviews." (Laura Kinsale, author of Flowers from the Storm)
"In a deep, gravelly voice, narrator Nicholas Boulton performs this tale of sworn enemies in Wales in the 1280s…Boulton incorporates a dozen different accents--from lilting Welsh to lightly accented English--without missing a beat and brings breathless, action-filled sword fights to life. Amid complicated political wrangling for control of the Welsh and Marcher lands, King Edward marries Gwenllian to Ranulf, which brings about a stormy, passionate peace--and some steamy sex. Listeners will be captivated by this story of loyalty, honor, and love." ( AudioFile)

I already have and the reason is the well told story and nuanced narration.

The complexity of characters.

What does Nicholas Boulton bring to the story that you wouldn’t experience if you just read the book?

I actually got this book over a week before I upgraded it to narration and was blown away with NB's narration. He brought every character to life with his nuanced voice. Guess what? I never got to read it because he was so good!

You bet! But life tends to get in a way and it took me about three days to finish it.

Earlier this month this title was free, with audio narration offered at $1.99, and I just couldn’t pass it up. Was I ever glad to get it! I have to say that I never got to read it because the narration done by Nicholas Boulton was amazing. He is one of those narrators that can suck you in a story and never let you go.This is one of those medieval stories that involves two very complex characters and is filled with emotional and intense moments from start to finish.I loved the heroine and her personality and I liked the way the author handled her dilemma about who she really was and who she wanted to be. As for the hero, if you’re a sucker for a strong, alpha male that is torn between his loyalty to his king and redeeming his soul, you’ll fall in love with Ranulf.Elizabeth Kingston is a new to me author but not for long. I’m looking forward to listening to her upcoming stories in this and other series. She created a world very realistic and a romance that will stay with me for a long time.Melanie for b2b

This wonderful story by Elizabeth Kingston is definitely reminiscent of Laura Kinsale's writing style. Of course, Nicholas Boulton also adds to the pleasure of this delightful charmer. It is my hope that the author continues this story and makes it a series.

This book will appeal to anyone who enjoys flawed characters, strong female heroine with an intriguing historical story, Gwenllian and Ranulf, the main characters, have a special bond that transcends any social or family controversies. It's truly an endearing journey of love and trust.

Well written and read. Look forward to reading more books by this author. Nicholas boulton does a fantastic job

Loved it, if this isn't Laura Kinsale*shock*

I loved the the book and the performance was wonderful, capturing each character's personality and emotions. This book is so Laura Kinsale. If it isn't, I just have a new author to LOVE. Mr. Boulton, I don't know how you give you performance such soul, but you are a god amongst narrators

All credit to Elizabeth Kingston

I want to quickly and firmly clarify that this wonderful book was written by Elizabeth Kingston, NOT by me under another name! (Believe me, if I'd finally finished a new book, I'd be crying it from the rooftops.) "Laura Kinsale Presents" is a small selection of books by new authors that I believe readers will enjoy performed by Nicholas Boulton.

Where does The King's Man rank among all the audiobooks you’ve listened to so far?

I would put it in the top 10%. The story was engaging, the writing and research flawless, and the narrator... *sigh*

After the second novel narrated by Nicholas Boulton, I am hooked and infatuated. He is absolutely fabulous.

This is my first book by Elizabeth Kingston. I picked it up because it was recommended by Laura Kindle. I am so glad I did.

I love this book. Beautifully written and Nicholas Boulton brings it and it's wonderful characters to life with his performance....Perfect.

I wish it didn't end

As soon as I saw that Nicholas Boulton narrated this book, I knew I must listen to it. No readers allow me to be immersed in a story like he does. I have found that many historical romances have more depth and complexity than modern ones, and this book is no exception. The main characters are both flawed and honorable, and both are filled with self-doubt covered by bravado. They are equally strong, and rather than change for each other, both grow to love the other for who they really are. I hope there are books to follow this one, because the supporting characters were interesting and worthy of their own stories. The only thing I disliked about this audio book is that it ended.

Storytelling at its best!

I was happy to see the Laura Kinsale vows that she's not the author because I went on a hunt to see if Elizabeth Kingston was just an alias for Ms. Kinsale. And I loved this book as much as I do Kinsale's.
The heroine, Gwenllian, is the best. She is strong, self-reliant, fearless (and not in a crazy way, though in unconventional ways), and her characterization is non-stereotypical. She does not meet the all-too-common standards of feminine beauty and softness and meekness the world, and thus, many authors base their heroines on. And Ranaulf was the rare type of man to recognize the beauty in her and the gift of the uncommonness of it. He was not always a likeable guy. But Kingston's writing is so good that, when he prayed near the end (I can't say for what), I found myself praying with him. And mine was as heartfelt as is. If I wasn't hooked I would've been once Ranaulf uttered: "I'm her man, hers & no other." (Sigh).
I have purchased over 1600 Audible books, and this one is one of the exceedingly rare ones that have earned 5 stars from me in any category, especially in the story area and overall. I wait with baited breath for more Audible books by this author.

I never tire of listening to this story. The narrator is perfect, his voice commanding &
Pitch perfect. The story has just enough conflict to keep it interesting. However, the writer’s command of her time period, language makes for a wonderful time

WOW! Please give me more!

Where does The King's Man rank among all the audiobooks you’ve listened to so far?

For pure pleasure, up there at the top! Elizabeth Kingston was an unknown quantity but I should have trusted Laura Kinsale, who brought her to us with wonderful Nicholas Boulton.

It was pure joy!

The setting is one of my favourites Historically and I am very familiar with the times and Edward 1 and his treatment of the Welsh people.
Elizabeth Kingston's writing was quite beautiful and not an Americanism anywhere!

What does Nicholas Boulton bring to the story that you wouldn’t experience if you had only read the book?

Nicholas Boulton must be the best Narrator ever; each character is perfection and his Welsh accents are just so unbelievably good, male and female.

(I wish someone would grab him to read Dorothy Dunnett's 'Lymond Chronicles'.)

My eyes were tearful numerous times and I was choked up purely because I was so taken with the characters and storyline.

This was a wonderful experience from a new writer and I hope there is more coming very soon. Perfect book read by the most perfect voice ever!

The poetry of love ... contained in the prose

These characters jump out of this wonderful story and one feels that we are close up in a cinematic telling of medieval life. Wonderful.
More please Elizabeth Kingston! The truth spills out of the pages narrated so expertly and brilliantly by Nicholas Boulton.... I wanted to hear it again from the start.

On so many levels, this is an excellent book, Ruardean however is not 20 miles from Gloucester through - at he time savage country - but not the depths of Wales.