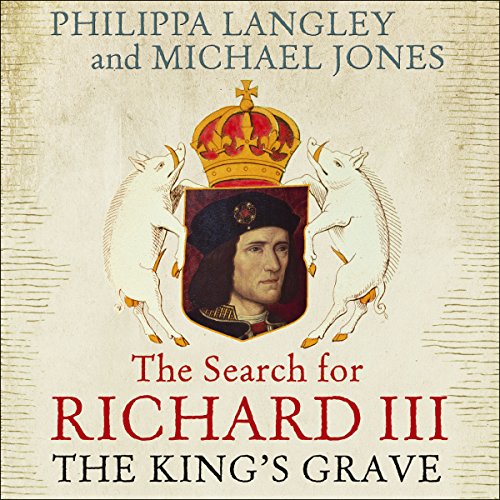 The official inside story of the life, death and remarkable discovery of history's most controversial monarch.

On 22 August 1485 Richard III was killed at Bosworth Field, the last king of England to die in battle. His victorious opponent, Henry Tudor (the future Henry VII), went on to found one of our most famous ruling dynasties. Richard's body was displayed in undignified fashion for two days in nearby Leicester and then hurriedly buried in the church of the Greyfriars. Fifty years later, at the time of the dissolution of the monasteries, the king's grave was lost - its contents believed to be emptied into the river Soar and Richard III's reputation buried under a mound of Tudor propaganda. Its culmination was Shakespeare's compelling portrayal of a deformed and murderous villain, written over a hundred years after Richard's death.

Now - in an incredible find - Richard III's remains have been uncovered beneath a car park in Leicester. The King's Grave traces this remarkable journey. In alternate chapters, Philippa Langley, whose years of research and belief that she would find Richard in this exact spot inspired the project, reveals the inside story of the search for the king's grave, and historian Michael Jones tells of Richard's 15th-century life and death. The result is a compelling portrayal of one of our greatest archaeological discoveries, allowing a complete reevaluation of our most controversial monarch - one that discards the distortions of later Tudor histories and puts the man firmly back into the context of his times.

What listeners say about The King's Grave

This book isn’t a rip-snorting page-turner, but is nevertheless a decent enough listen and it did alter my perspective on Richard III. Before reading this, I, like every other schmuck who has never given the matter very much thought, assumed that Richard III was a wicked and cunning Machiavellian villain who would stop at nothing to achieve his ambitions. But it turns out that probably he wasn’t such a bad person (or King) at all.

Basically, it appears that most of Richard’s bad press was Tudor propaganda, and that’s where Shakespeare got the inspiration and material for his story. The jury is still out on whether Richard ordered the murders of the Princes in the Tower, but there is no strong evidence to confirm that he did. According to the author of this biography, even if he did commit this double murder, it doesn’t necessarily mean he was horribly evil – kings had to kill people for political reasons quite often - they were dangerous and bloody times.

So, this book is half about the life and times of Richard and half about searching for his body under a car park in Leicester – and both are equally interesting. Not riveting, but interesting. You can’t help but wonder if the author has some unrealistically favourable bias towards Richard, but even if this is true, it is still good to hear that there is another side to the story of the last English King to die in battle.

Very informative and enjoyable. Would love a follow up 're any new research etc. Begs a lot of questions 're Tudor motivations and gives lots of food for thought.

I couldn't stop listening to this, the presentation of the life and history of Richard iii was well presented and done in a way that humanised him and brought him to life, while sharing information about him I had never heard before. This mixed with the emotional and fascinating events that was the search for his body, it's discovery and authentication makes for a simply wonderful book that is well read and completely sucks you in.

I was so looking forward to listening to this audio book but was dreadfully disappointed with it. The book starts off with what seems to be an interminable list of dates and the narrator delivers everything in a flat tone. This is such a fascinating story that would have been better off without this book and this narrator.