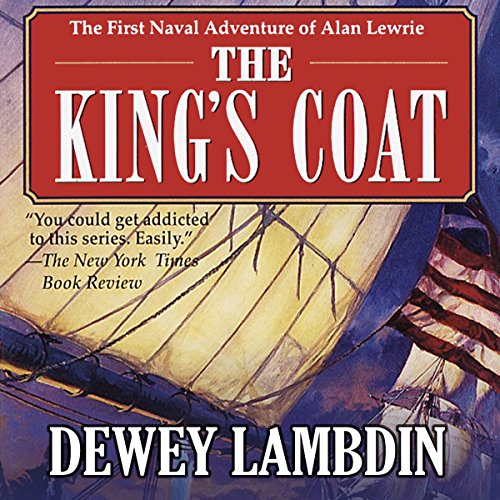 It is 1780, and 17-year-old Alan Lewrie is a brash, rebellious young libertine. So much so that his callous father believes a bit of naval discipline will turn the boy around. Fresh aboard the tall-masted Ariadne, Midshipman Lewrie heads for the war-torn Americas, finding - rather unexpectedly - that he is a born sailor, equally at home with the randy pleasures of the port and the raging battles on the high seas. But in a hail of cannonballs comes a bawdy surprise.

Wish ALL Alan Lewrie Series was Available on Audio

The Alan Lewrie series is extremely interesting & addictive. His peronal life might be a diaster but his Professional Life is where he Shines!
I am a woman & some people might assume female readers would take exception to the character's behavior. I don't fault the character for his supposed "Inappropriate" behavior--I try to look at the big picture from realistic stand point and from that I can appreciate the cirumstances. Like I said before--his Professional Exploits are what makes the book!

To me the important thing is getting the job done and when it comes time to kick arse and take names--that is exactly what our hero does and he does with such a flare that you want him to do it againa and again!!

My only Complaint is that several books are NOT available on Audible. It is my Strongest Hope that the remaining books will be made available SOON. And it goes without saying that the books Must continue to be narrated by John Lee--nobody else could do justice to Captain Alan Lewrie.

This is the first of the series.

Some books of the series are a bit slow (at parts), and lots of sailing until the battles and sex... Dewey Lambdin writing is excellent but is not worth the extra credit with the choice of comparable books.

Blood and thunder, and a bit bawdy

Lambdin's Alan Lewrie novels have addicted me to the historic Royal Navy. Sea battles, encounters with historical figures such as Nelson and Hood, Napoleonic Wars, American Revolution, from Land's End to America's Eastern Seaboard, the Caribbean, and the Mediterranean - this series is steeped in living history that you can't help but learn from. One can only take so much blood and thunder at one go though, and Lambdin does a great job of altering the pace by inserting Lewrie's on-shore adventures in a rather humorous, or at least lighthearted, way, complete with outraged fathers, husbands, and spurned shrews. He's not the perfect hero, but his heroics are perfect. I REALLY hope Audible adds more Lewrie novels beyond they 10 they already have. A great series, but not for the faint of heart!

The Aubrey–Maturin series (by Patrick O'Brian) is, after listening to 1,500 audio books since 2007, still my favorite series. Howsoever, Dewey Lambdin's Alan Lewrie books, read by the esteemed John Lee, are right up there with the best swashbuckling fiction available on Audible.

What the listener gets is fiction, history, thrills, and intrigue with a dash of corruption and jealousy to boot. There are occasional saucy vignettes that are less pornographic than historical bawdiness. Napoleon, too, gets his due eventually as is the tradition with historical British naval fiction.

I like this main character. When I was in the Peace Corps (Liberia) in the 1970's I met men like Alan Lewrie (our protagonist). They were cocksure, vengeful, and righteous all in one package.

I am on book #6 and will go the distance with this great horde of sea treasure.

I enjoy historical novels about the British Naval during the era of sail, particularly in the late 1700s to the early 1800s. There are many great writers in this genre that I have enjoyed such as C. S. Forester, Patrick O’Brian, Dudley Pope and so many more. In 2010 I found and read a book on Audible by Dewey Lambdin. I enjoyed the book but it has taken me until 2015 to get back to read more of this author. I had read book three in the Alan Lewrie series. I now start with book one in the series.

In book one “The King’s Coat” in the year 1780, Alan’s father thinks Alan needs more discipline so at the age of seventeen Alan finds himself a new midshipman aboard the 64 gun HMS Ariadne. It also appears that the father is ripping off Alan’s inheritance. In this book we see Alan go from a spoiled teenager into a competent naval officer.

Lambdin is a good writer and I think he writes a great description of sea battles. I have two complaints. My first is trouble warming to the hero Alan Lewrie. So far he is too much of a scoundrel for me to relate to. And my second complaint is the story is a bit to bawdy at times for my taste. I will see how book two goes before making up my mind about this series. One of my favorite narrators, John Lee narrated the book

Errol Flynn has nothing on this guy

I found this series of books after I completed the excellent Aubrey/Maturin Series by Patrick O'Brian. Lambdin has created a character (Alan Lewrie) who could be described as an over-sexed reluctant hero. The book is witty and exciting and definitely worth a read.
John Lee does an excellent job as narrator with clearly distinguishable characters.
When you finish this series try the Aubrey/Maturin Series it has less humor but should quench your thirst for high seas adventure.

Fantastic in every way!

What made the experience of listening to The King's Coat the most enjoyable?

John Lee the narrator is perfectly matched and made this a great listening experience! His portrayal of all the characters couldn't be better!

What other book might you compare The King's Coat to and why?

For me I guess The Hornblower series would be an obvious comparison but I don't think I have yet read something to compete.

There are so many... At the start of the story... he (Alan Lewrie) was set up by "family" and was forced into Naval service. You would never think that it would turn out so well for him. From the start I was routing for our young hero to succeed at all he did! As the story continues there is a great bond between reader and the main character Alan Lewrie that develops. There are many exciting as well as very funny moments to enjoy not once was I bored with this great audio book!

Who was the most memorable character of The King's Coat and why?

Well Alan Lewrie of course stands out as he our young hero our main focus throughout entire book. I cannot wait to continue this series and see what life will to bring Alan!

This is so much more than a naval adventure! While you get your exciting moments of war and sea battle you get sea life in full. The good the bad and everything in between. You're made to feel you are experiencing life right next to Alan Lewrie. Put into the time and place and I can't ask for more from my audio escapes!!

Best of the genre

Well written, seems less cartoonish than the Hornblower and Belitho series. Can be pretty funny at times. And, of course, narrated by my favorite, John Lee. if you like the period sailing stories, you owe it to yourself to try this one.

In the Tom Jones-esque prologue to Dewey Lambdin's The King's Coat (1989), the 17-year-old bastard Alan Lewrie is caught by an outraged posse--his natural father, his half-brother, his father's servant, his father's lawyer, and the new vicar--in bed in flagrento delicto with his half-sister. She immediately begins screaming that he has raped her (despite having been seducing him for two weeks) and Alan is in a fix. He is disowned, banished, and, what is worse, shipped off to sea to join the British Navy as a "gentleman" midshipman during the Revolutionary War. Alan, whose only notion of the navy has been that it is a floating prison with the added danger of drowning, nevertheless soon determines to learn and thrive there so as to get some measure of revenge on his scheming family.

Lambdin depicts Alan's reluctant entry into the navy and subsequent adventures with enthusiastic detail. Frigates, orlops, topgallants, fo'c'sles, kedges, 9-pounders, warrant officers, dog watches, and more. Along with Alan we learn about the ships, masts, sails, lines, knots, duties, punishments, foods, eating, sleeping, relieving, and cleaning arrangements, weapons, tactics, and men (and boys) of the 18th century British navy. I can't visualize which sail is being used when, etc., but the gist of what happens is always clear. And there are some exciting and horrific naval battles to experience.

In addition to vividly depicting the world of the navy, Lambdin has a sense of humor, as in this description of the father of the elfin and nubile Lucy Beauman:

Fans of C. S. Forester's Horatio Hornblower series should enjoy The King's Coat, but should be aware that Lambdin relishes recounting Alan's sexual encounters with women, from lonely married ones to prostitutes, and also has him swear like, well, a sailor. A couple of sequences involving Alan's hedonistic pleasures on shore leave nearly had me wondering whether I'd entered John Cleland's Fanny Hill. Sex is as much a part of the human experience as violence, so if Lambin wants to spend as much graphic detail on Alan's amorous engagements as on his naval ones, why not?

Once in the navy, Alan exhibits a Hornblower-like knack for being in the right place at the right time and for reacting in dangerous situations quickly, courageously, and effectively (despite his confusion and fear). Alan is interesting because his temper and foul mouth sometimes get the better of him, but his sharp tongue may also ooze honey, and whenever he is loathing himself for toadying to some senior officer, one suspects that he really means his flattery because at heart he is a good person and an earnest midshipman. And at times Alan resonates with the wind in the sails, the sun in the sea, and the membership in a community of men who are diligently working in some of the most complicated and impressive things human beings have created, wooden sailing ships.

John Lee reads The King's Coat with his characteristic wit and manner, and fully enjoys himself with it, especially when voicing the snide or uptight characters.

I am looking forward to the other volumes in the series.

If you could sum up The King's Coat in three words, what would they be?

What other book might you compare The King's Coat to and why?

This series is ALOT like the Jack Aubrey series...but I enjoy Alan Lewrie, and his adventures, more that Aubrey. I would expect anyone familiar with sailing would appreciate the accuracy...but it can certainly be enjoyed by anyone. The series continues to be a joy to listen to :)

This is an incomplete series.

Not as good as Bolitho or Ramage, in my opinion but what has spoiled it for me above all else is that, being an inveterate 'start to finish' reader, I suddenly find after completing book 8 of 26 that there are no more available.

With all 8 books, it's difficult to know at times whether it's erotica or naval history but I've ploughed through them nevertheless although it has been hard going at times.