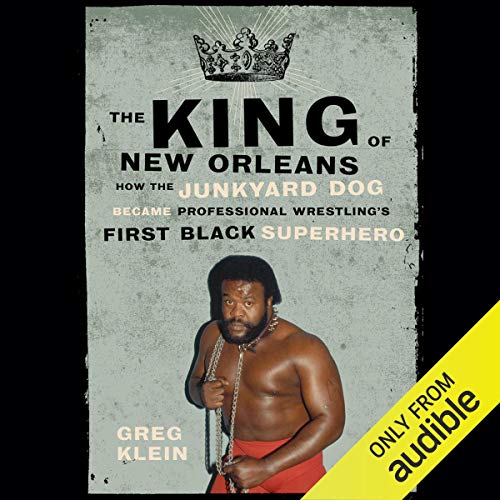 The King of New Orleans

Telling the remarkable tale of a man who is still remembered on the streets of New Orleans and in the hearts of professional-wrestling fans, this book aims to restore the overlooked Junkyard Dog to his proper place in the history books.

In 1979, Sylvester Ritter, also known as the Junkyard Dog, managed to break one of the final color barriers in the sport by becoming the first Black wrestler named undisputed top star of his promotion, and this biography reveals all the famous feuds and business back stories that made him a wrestling legend. By 1985, New Orleans was one of the hottest cities in the Mid-South for pro wrestling due in large part to the Junkyard Dog; he became a legend in the Big Easy, drawing sellout crowds to the Downtown Municipal Auditorium and huge crowds to the Superdome, a feat unparalleled by any other wrestler.

The King of New Orleans delves into wrestling’s recent past and recounts how a region known for racial injustice became the home of the sport’s first Black idol.

What listeners say about The King of New Orleans

Great story about the territories and race in wrestling. The narrators mispronunciation of Verne Gagne’s last name gave me a chuckle.

The King of New Orleans is as much a biography about Mid-South Wrestling as it is about JYD. And it does a solid job when it comes to delivering on both topics. My only complaint is that the author seemed to rely too much on reporting from Dave Meltzer — an industry outsider who is routinely lambasted by professional wrestling royalty for his inaccurate reporting and, sometimes, outright fabrication of events taking place. So, it's often very hard to tell what's real and what's not. I guess that's what makes this an entertaining book for the wrestling audience.

The King of New Orleans is a tragedy because JYD died far too young, and his star burnt out long before it should have. He was an immensely talented wrestler who reached heights that were seemingly unimaginable for the time. This book is a solid attempt at celebrating his career and reminiscing about Mid-South Wrestling. Go into with this mindset and you'll enjoy this Audible Original.

the book was titled to appear to e about The Junkyard Dog. The majority of the book was actually about Bill Watts and Midsouth Wrestling. The narrator also frequently mispronounced wrestlers names suck as Verne Gagne, Chris Benoit, Mr Wrestling 2 and others. you would think someone would at least made sure he knew the pronunciation of the wrestlers he was reading about

As an Amazon reviewer noted, this book isn't really a biography of JYD the man, so if that's what you're looking for, you'll be disappointed. There's a reason the book isn't called "The King of New Orleans: The Life and Times of Sylvester Ritter."

Instead, Greg Klein uses JYD as an entry point and guide to explore the bygone territorial wrestling system, specifically Bill Watts' Mid-South Wrestling promotion of the late 70s and 80s. As the place where guys like Ted DiBiase, the Fabulous Freebirds, Jim Duggan, Jake Roberts, Paul Orndorff, Mr. Wrestling II, and of course JYD came to prominence, Mid-South holds a special place in the hearts of a lot of old-school wrestling fans who had not yet (or never did) buy into the "sports entertainment" offered by the WWF or later WCW. Klein does a nice job detailing how Mid-South, thanks in large part to JYD, transcended the label of "wrasslin'" and connected with its fans on a personal level. (Some of the heels were so hated that fans tried to storm the ring and stab them.) Because it's easy to assume that pro wrestling is the same now as it always was -- a billion-dollar, worldwide entertainment industrial complex -- it's important to remember, as Klein asks us to, the industry's roots as a network of loosely related regional carnivals, with performers and storytelling devices as distinct and varied as the geography. Seeing how this system changed when a black man became a main-event babyface in the deep south helps shed light on the bigger industry changes to come.

What was one of the most memorable moments of The King of New Orleans?

I greatly enjoyed getting a glimpse into the marketing strategy and booking psychology that went into making JYD the promotion's first black main event draw. For instance, Watts took JYD's weakness -- the fact that he was never a great in-ring worker -- and used it to his advantage by booking him in short squash matches that highlighted his charisma and made him seem invincible and credible as a title threat. Watts also established a rule that JYD would never need saving -- if he got in a scuffle, he came up with a way to bail himself out.

It was also pretty fascinating that, during his Mid-South run, JYD was more popular with schoolchildren in New Orleans than Archie Manning or Pete Maravich, according to a poll taken at the time. That made me rethink the impression I'd always had of JYD as a popular but not particularly transcendent performer (of course, all I had to go on were his WWF and WCW runs, by which point drugs and his deteriorating physical fitness left him greatly diminished).

What does J D Jackson bring to the story that you wouldn’t experience if you just read the book?

To the previous reviewed who railed on JD Jackson's reading: Settle down. Breathe. No matter how big the problem, there's never a need to go full caps lock.

Jackson does mispronounce a number of wrestling-specific names. It's Oh-lee Anderson, not Ol' Anderson. It's Mr. Wrestling 2, not Mr. Wrestling the Second. It's Ben-wah, not Ben-oyt (seems like you could know that one just from watching the news). While not knowing the ins and outs of the Audible recording process, I would think getting those right would not be the responsibility of the narrator, but of the Audible producer. It's not like Jackson read the names wrong and the producer said, "Well he missed those, but crap, he's the narrator. I guess we have to leave them in." No one in the room knew, and yes, someone probably should have taken a few minutes to do their due diligence. Not everyone's a wrestling fan.

However, those occasional mispronunciations don't take away from the overall performance (they're actually kind of funny after a while). JD Jackson is a fine narrator who treats the material with the seriousness it deserves when dealing with the real-life issues of race and the perils of the pro wrestling lifestyle, and he finds enough humor in the cartoon world of in-ring wrestling without being condescending or campy.

Though later chapters get a bit muddled and repetitive with the ins and outs of the promotions in-ring storylines, this book is totally fascinating if you have any interest in this formative era of wrestling's history. Recommended.

Good yet misleading but who picks these narrators?

I'm guessing they pick the narrators based on their voices, and granted this narrator has a great voice, but can't they get someone who knows how to pronounce people's names? Or have someone take a few minutes before hand and tell the person how to say people's names? This has happened a few times with books I've listened to (I'm currently listening to the Dusty Rhodes book and it's happening there too) and it's annoying.

Also, this isn't really about Junkyard Dog. It's really about the history of Mid-South Wrestling. They do an epilogue about how JYD's career ended up but really it's about Bill Watts's promotion. Which is okay, I like learning about all aspects of wrestling history. But I guess they didn't think a book about Mid-South Wrestling would sell? Maybe? So I liked this book but if you are looking for a retrospective of the JYD, you will get that I guess but that's not really what the book is about.

don't waste your time. It was more about Mid-South

great story about a great man

The story was great, and I loved the narrators voice... but he butchered nearly every name from the wrestling industry. If I would have haeard him say Vern Gagg-Knee one more time I was gonna punch my phone.

The author leaps back and forth between objective writing and the fantasy world of professional wrestling, telling stories as they were repeated to him, or as he read from other writers. The author spends some time working the actual history of Sylvester Ritter (Junk Yard Dog) but this book is more about the author's experience with wrestling.

This is a book that does not do well at staying real versus getting lost in the story line of wrestling. Several parts of the book are like reading the wrestling magazines from the 80's and 90's.

There is nothing in this book that has not already been published elsewhere.

Story good, narrator not so good!!

I really wish the narrator researched info before narrating this book, alot of names mis-pronounced..really annoying!!

My biggest problem with this book is that it is less about its title character and more about Bill Watts and the Mid-South territory. I was hoping for some insight to Sylvester Ritter himself, but the book offers little. In addition, it jumps around chronologically a bit and frequently picks up a narrative that I thought had already been completed. If you are interested in Bill Watts, Mid-South, or a history of African Americans in wrestling, the book is worthwhile. If you are looking for in-depth information on the Junkyard Dog, you'll have to look elsewhere.

Disappointing in the sense that this contains more information regarding Bill Watts than JYD. Also jumps around alot story wise.

Reads like its someone's school homework. Lots of facts, dates and quotes but no fun