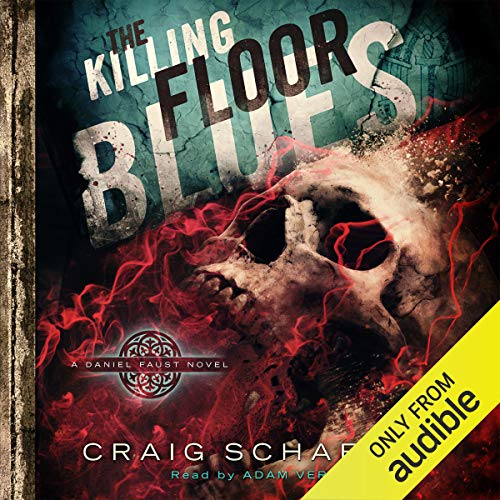 Nobody has ever escaped from the Iceberg. It's a privately-owned prison deep in the Mojave Desert, staffed by brutal guards and surrounded by desolate wasteland. Inside the walls, gangs and predators are constant threats; outside the walls, there's nothing but a sniper's bullet or a slow death in the desert heat.

Framed for murder and snared in a deadly curse, Daniel Faust lands behind bars with a target on his back. Worse, with Faust out of the picture, the Chicago mob is making its bid for control of Las Vegas. If he can't engineer his escape in time to stop them, none of his friends are safe. Then there's the matter of the warden's dark secret, the one that's filling up the prison morgue with body bags.

Faust has been caged, buried, cut off from his allies and his magic. His enemies think they've won. They're about to learn, the hard way, that this is one sorcerer who always has a trick up his sleeve.

Nobody has ever escaped from the Iceberg. But the Iceberg has never had a prisoner like Daniel Faust.

Best Book in the Series So Far

This book was a step up to the next level. Daniel Faust is evolving as a character.. he is becoming more powerful and likable and the bad guys are more hateable. The story is a little simpler and easier to follow. I enjoyed it a lot - cant wait for the next one!

A great continuation of a great series

This is starting to become my most favorite urban magic series to date and this book made sure for it to stay that way.

Overall it's an interesting change of pace compared to the first ones. You clearly see in this book that magic does not fix all problems, it helps, but you still need a lot of planning to pull things off. A fireball won't really help.

if you like Urban Fantasy, this is a must read

I don’t even know how to write the review for this. There are so many feels! First of all being that I do not want Daniel Faust’s story to end. Coming to the end of a good book is like a tragedy. Being involved in this series though, it just pulls you in and does not let go! Instead of that suffocating feeling, I got all the feels of being comforted and safe. Maybe I just won’t stand so close to Faust since he is CONSTANTLY in trouble!

If you have read the others, and I highly suggest you do, then you know book four ended on a massive cliff hanger. We are awaiting Daniel’s fate and then book five starts and Daniel is not where I expected him to be. Like he did not have enough problems with everything that is about to happen in Las Vegas, oh no… apparently someone felt that he needed a vacation, in the form of prison.

I think this is my favorite of the series. There just something about Faust that lets everyone around him know that he will not bow down, no matter what is happening. Everyone around him seems to be in power and yet he can waltz in with a smile on his face. He doesn’t even have any real cards to play but he finds them in mysterious places that only Faust would be able to find.

With no wizarding tricks up his sleeve, literally and figuratively, Faust is left to deal with his problems within the prison, on his wits. He’s a quick thinker even when it looks like he cannot come up with anything else.

Somehow Adam Verner was able to keep up with this. There are so many different action points and so much going on that I was worried, but I did not even have time to worry because Faust kept going, and so did Adam! This was exceptionally narrated and by now I expect that from Adam Verner. This voices are just as shrewd as the characters, dripping with poison and menace. Even with so much going on, Adam never misses a beat! Either that or the production team is fan freaking tastic because there are no hiccups at all, and with all this action I would think someone would skip somewhere. Incredibly well done and this book deserves it. Adam Verner and Daniel Faust go hand in hand. I’m really hoping that Adam will narrate the Harmony Black books if they go to audible as well.

In short: If you like Urban Fantasy, this is a must read. I loved all five book and I am hoping for more!

Audiobook provided for review by the author.

Ive read every book (including the novella) up until this, and am currently on 5. I started out rather enamored with the series. I grew concerned at book 3 when Faust's enemies kept growing stronger and he remained stagnant. I almost gave up 4 but a review promised he'd grow more powerful, he did not. He grew more desperate, and even then he just used a tool he already had for the situation.

It doesnt take 5 books and the degree of escalation the author has gone through to establish where the character stands on the totem pole. Three would have sufficed.

Quite frankly, I wanted to rate this lower but i try and keep my personal irritation out of reviews. That said. I can not fathom why the antagonists are scaling to god like beings and the main character can still be taken out by three thugs with semi automatic weapons.

Im going to listen to 6 since i already bought it and the summary is promising some type of progress, but I feel that the story is growing less and less organic as time goes on.

The narration is great as always, though Im noticing some voices overlapping with certain accents.

This is my favorite one so far! The narrators voices work great with the characters and the story is very good

The best one so far!

The Killing Floor Blues by Craig Schaefer and narrated by the great Adam Verner is book five in the series! I thought this was the best book so far. Most of the book takes place in a prison where Daniel is held on bogus charges. Lots of action and craziness ensues as usual for these books! Great unpredictability, fantasy, action, and exciting characters!
Adam Verner is a magic man himself when it comes to narration! Totally awesome!

Entertaining from start to finish. I love Craig Schaefer's writings, and the Faust Series is my favorite of them all.

awesome collection can't wait to get the next book in the series to see what happens next.

The first part of the book was everything!

The second part dragged on so much that I just give up. I tried to listen twice and could not hang. Hopefully whatever I missed is made clear in the next book..

Wonderful performance by the narrator as always. The gang is back for another magical James bond-esque romp. My only regret is that this story felt a little like a bunch of short stories stuffed together because it dragged in some places and had odd transitions. There were also a few sub plots that could have been cut. A lot of fun though, as always and a great escape. Can't wait for the next one!