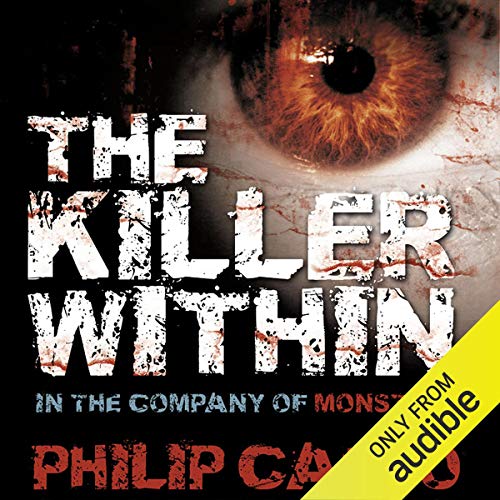 In the Company of Monsters
By: Philip Carlo
Narrated by: Kate Bateman
Length: 10 hrs and 34 mins
Categories: Non-fiction, True Crime
5 out of 5 stars 5.0 (2 ratings)

As research for his acclaimed true-crime books, Philip Carlo interviewed at length some of the most infamous criminals and killers of our times in prison and on death row. He was able to forge a trusting relationship with his subjects, enabling him to extract the facts behind their infamy and identify what motivated them to commit their horrific crimes.

Carlo's investigative achievements were remarkable, but what wasn't known to his readers was that, while working on The Ice Man, he learnt he had amyotrophic lateral sclerosis (ALS), a terminal illness that caused all of the muscles in his body to atrophy over time. Suddenly, after years of penetrating the minds of killers, Carlo was himself being pursued by the grim reaper. But rather than lying down and succumbing to the disease, Carlo continued to work right up until his death in 2010, and his books were published to critical and commercial acclaim.

In The Killer Within, Carlo documents his difficult experiences with ALS and explains how he managed to continue working as a true-crime author in the face of adversity. He provides an intimate account of his relationships with Ramirez, Kuklinski and Casso and reveals intriguing information about writing his bestsellers while simultaneously coping with the numerous challenges that ALS presented as it slowly began to steal his life away.

Philip Carlo was the author of the international bestseller The Ice Man, as well as The Night Stalker, Gaspipe and The Killer Within. He lived in New York until his death in November 2010.

"With brutal honesty, Philip Carlo writes from the heart” (Robert De Niro)
“An inspiring testament to what the human mind can accomplish in the wake of devastating change… a brave psychological exploration of a writer's craft and terminal illness" (Kirkus Reviews)

What listeners say about The Killer Within

Despite average reviews, this book is the best of Carlos work. In my view this is why audio books are a good thing. I struggled to find the rhythm of the authors written work, however the narrator has mastered it. To the benefit of the author, this book spoken by this particular narrator is a masterpiece, and I have listened it to many times over. The author is not self praising, just expressing his life ending story. It’s an emotional and sometimes morbid realism of the darker side of life, yet from the perspective of someone who wouldn’t give up. I bought this book looking for the extra details of the authors previous books, and I found them, but in the end I found so much more. Would highly recommend.