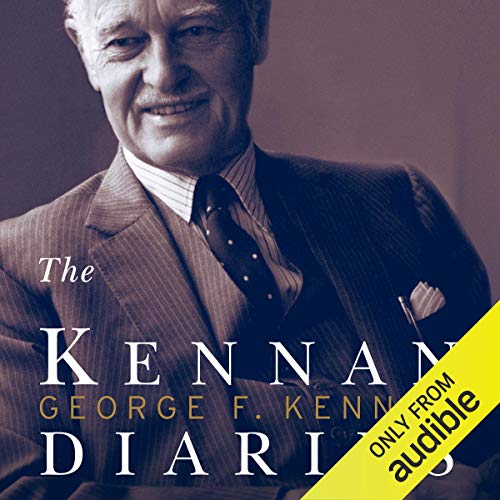 A landmark collection, spanning 90 years of U.S. history, of the never-before-published diaries of George F. Kennan, America’s most famous diplomat.

On a hot July afternoon in 1953, George F. Kennan descended the steps of the State Department building as a newly retired man. His career had been tumultuous: early postings in eastern Europe followed by Berlin in 1940-41 and Moscow in the last year of World War II. In 1946, the 42-year-old Kennan authored the "Long Telegram", a 5,500-word indictment of the Kremlin that became mandatory reading in Washington. A year later, in an article in Foreign Affairs, he outlined "containment", America’s guiding strategy in the Cold War. Yet what should have been the pinnacle of his career - an ambassadorship in Moscow in 1952 - was sabotaged by Kennan himself, deeply frustrated at his failure to ease the Cold War that he had helped launch.

Yet, if it wasn’t the pinnacle, neither was it the capstone; over the next 50 years, Kennan would become the most respected foreign policy thinker of the 20th century, giving influential lectures, advising presidents, and authoring 20 books, winning two Pulitzer prizes and two National Book awards in the process.Through it all, Kennan kept a diary. Spanning a staggering 88 years and totaling over 8,000 pages, his journals brim with keen political and moral insights, philosophical ruminations, poetry, and vivid descriptions. In these pages, we see Kennan rambling through 1920s Europe as a college student, despairing for capitalism in the midst of the Depression, agonizing over the dilemmas of sex and marriage, becoming enchanted and then horrified by Soviet Russia, and developing into America’s foremost Soviet analyst. But it is the second half of this near-century-long record - the blossoming of Kennan the gifted author, wise counselor, and biting critic of the Vietnam and Iraq wars - that showcases this remarkable man at the height of his singular analytic and expressive powers, before giving way, heartbreakingly, to some of his most human moments, as his energy, memory, and finally his ability to write fade away.

Masterfully selected and annotated by historian Frank Costigliola, the result is a landmark work of profound intellectual and emotional power. These diaries tell the complete narrative of Kennan’s life in his own intimate and unflinching words and, through him, the arc of world events in the 20th century.

What listeners say about The Kennan Diaries

George F. Kennan was the most celebrated diplomat-intellectual of the 20th century. He was the author of the strategy of containment that the United States adopted for the cold war. He was thought of as a strategist and as these diaries make clear, he spent much of his life thinking about political philosophy. The diaries cover 88 years so Frank Costigliola did a lot of editing to make into a readable format without changing the content. Kennan did not like automobiles, planes or fax machines; I wonder what he would say about all the electronic gadgets we have today. I was most interested in what he wrote in the section of the diaries covering the late 1990’s about not allowing the former USSR countries such as Poland, Hungry, and Ukraine to join NATO. He said these countries must be allowed as a buffer zone between Europe and Russia otherwise Russia would feel threaten and a new cold war would start or possibly a shooting war. Considering what is happening today in the Ukraine no one paid attention to his warning. Toward the end of his life he wrote a book called “Around the Cragged Hill” which he thought was his best work but the world has ignored. In the diary he was most upset about how the book was ignored. He wrote 20 books won the Pulitzer Prize and the National Book Award twice plus many more awards. After he finished his career as a diplomat he was at Princeton’s Institute for Advanced Study for over 25 years. The diary reveals him to be a brilliant man but also one with problems of loneliness, self-doubt, and suffering from period bouts of depression. He was a gifted writer and his prose shine through even in the diary. I learned a great deal about what happened during the cold war from reading this book, I almost felt overwhelmed by the amount of information provided. I think I will read some of his books now that I know more about the man the books will mean more to me. If you are interested in history this book will interest you. William Dufris did a good job narrating the book. This would be a good book for whisper sync.

This is a phenomenal book. Amazing book.

This book is a selections of Kennan's letter and lifelong diary. Written by one of the most eloquent and brilliant men of the centuries he lived through, it offers a fascinating story of one man's life of thinking, both professionally and personal, geopolitical, in depression and almost up to his moment of death at age 100 plus. You are in his mind and the editor did a wonderful job selecting letters and diary entries so that this flows like a book written over 80 years by a truly profound thinker, writer, and man. One of the best books I have read (note: I am a Kennan book collector and this book makes an ideal pair with Gaddes biography of Kennan)

I had to give up listening to this book, as I regretfully could not cope with the narrator's accent and in particular speed. Even though I tried to hear it at a lower speed it didn't work for me.

A good book for readers that are more interested in Kennan as a person than in the events that he witnessed. I expected more insights about the events but what we get instead – and in hindsight, perhaps this is what is to be expected from a personal diary – are scattered remarks that much more often reflect the writer’s personal emotions and reflections, doubtless always well written, rather than a historical registration and interpretation of the most relevant events, some of which go by without a single remark from the writer. I will probably still read other books that Kennan actually wrote for publication.

So was this one ever hard

Boring format. Droning voice. Some interesting details, but overall not so good. Not recommend what so ever. Spare yourself pain.

For the Kennan purist?

Kennan is clearly a brilliant and likeable man who from an early age found original and interesting observations to make. Book is well read and the editor of these diaries does a good job. But. The material in the diaries, whilst copious makes for thin fare. Mostly huffing and puffing about the tedium in his life. One neither learns much about the world he lived in nor about Kennan's own life. Compare that with Shirer's brilliant and compelling Berlin diaries.