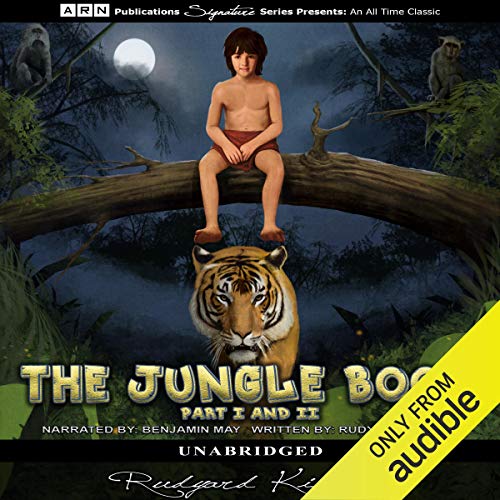 By: Rudyard Kipling
Narrated by: Benjamin May
Free with 30-day trial

The Jungle Book is a series of fables written about wild animals and a boy named Mowgli. Most of the short stories in the collection are about Mowgli, who wanders off into the Indian jungle while being pursued by a vicious tiger, Shere Khan. Shere Khan is lame and cannot catch Mowgli on his first attempt.

As fate would have it, a mother and father grey wolf adopt Mowgli as one of their own before Shere Khan can strike again. Mowgli grows up in the jungle, learning the ways of the animals and believing that he is a wolf as well. He makes friends with a bear and a panther and learns to speak their languages, all the while, Shere Khan is plotting his revenge on what he believes to be stolen goods.

What listeners say about The Jungle Book

These have been two of my favorite books since before I could read, so I picked over the available readings with trepidation. This is a wonderful reading by a lovely voice. It seems a particularly apt choice because to my no-doubt biased ears, these books sing a love song to India from a Brit who knew they never really owned it at all.

The volume fluctuates way too much.

The publisher needs to edit the audio track so that the volume does not fluctuate so much.

Beautiful narration by Benjamin May, really makes you enjoy the book to the fullest! Wouldn t pick another!