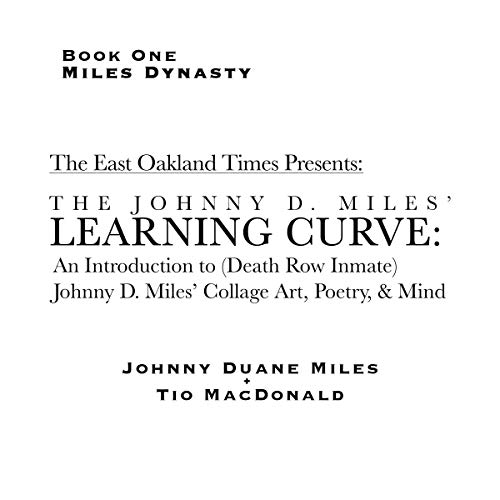 Twenty-seven years after the murder of Nancy Willem, the State of California has not put Johnny Miles to death. He has lived in a one-person cell on San Quentin’s death row, among hundreds of others convicted of first-degree murder. Johnny Miles has had to find a measure of acceptance to continue living on death row; he has chosen to live while under the sentence of death.

The learning curve is fine art in that patient informed perception is required for a fuller imbuing of Johnny Miles' artistic intent and subterranean self-expression. The learning curve is meant for the learned: a person that can separate flair from meaning; a person able to perceive thematic repetition and aberration; more or less an investigative and curious art enthusiast and/or enjoyer of abstract poetry.

Johnny Miles' collaging and poetry exist within the solitary confinement of his own sense of rhyme and rhythm, concept, tone, and intrigue. His work is a soliloquy in the effort to find meaning and transmit meaning. All listening of his work should occur with the background knowledge of his minimal formal education for Johnny dropped out of school in the 10th grade.

The word psychopath denoted is clinical while in general parlance communicates pure evil. The word "psychopathy" connotes less negativity to the labeled while still bordering on insult. Basketball great Michael Jordan has been called psychopathic as has the sitting American President, Donald Trump. British psychologist Kevin Dutton in his so-called Great British Psychopath Survey found many eminently valued professions, such as clergy, are filled in great proportions by psychopaths. Due to my own lack of credentials and my genuine relationship with Johnny Miles I cannot label him. However, Johnny Miles' art and poetic expressions are a step toward Johnny Miles exposing himself to the world as he is.

Death row shaped Johnny Miles into a collage artist. Inspiration struck his person in the form of an adolescent's after-school letter to a death row inmate; he tried collaging and it worked for him. Since that day in 2003, Johnny Miles has been dedicated to the art form.

Search for the My Crime Series on Amazon and Audible, biographies written by inmates on inmates. The My Crime series "candidly communicates the upbringing, life experience, character, and motivations of the incarcerated". Such communication is to grant the broader public an understanding of the men and women in California prisons (www.crimebios.com).