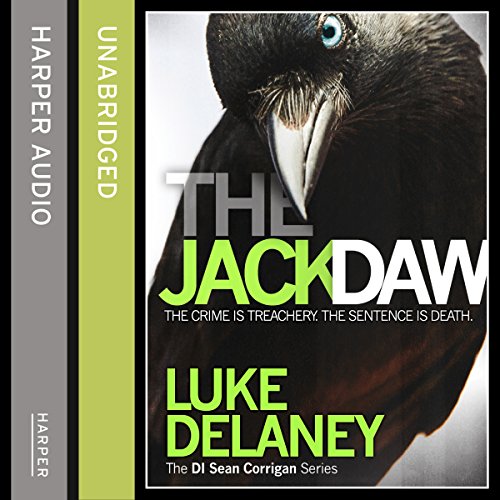 The fourth novel in the DI Sean Corrigan series - authentic and terrifying crime fiction with a psychological edge by an ex-Met detective. Perfect for fans of Mark Billingham, Peter James and Stuart MacBride.

Guilty or not guilty? A lone vigilante is abducting wealthy Londoners and putting their fate in the hands of the public. Within hours of disappearing, the victims appear on the Internet, bound to a chair in a white room.

Revenge or mercy? Their crimes of greed and incompetence are broadcast to the watching thousands who make up the jury. Once the verdict is cast, the man who calls himself The Jackdaw will be judge and executioner.

Live or die? DI Sean Corrigan and his Special Investigations Unit are under pressure to solve this case fast. But as The Jackdaw's popularity grows, Corrigan realizes he's hunting a dangerously clever and elusive adversary - one who won't stop until his mission is complete.

"A striking debut from a former Murder Squad Detective, Delaney is not his real name, but there is no doubt about his inside knowledge and ability to convey it." (Daily Mail)
"A confident, aggressive and very promising debut by a former Met detective." (The Times) "An authentic voice on how the police operate with a stone-cold killer striking randomly around London...scary authenticity". (The Sun)

What listeners say about The Jackdaw

With it's rehashed plot line, it's cod psychology and the clumsy writing style - Luke Delaney's fourth novel is a great big disappointment. He started out with such promise and his lack of writing style (as an ex copper) was excusable. However, despite having the time to work on this he clearly does not think it is worth the effort. The result is sloppy, embarrassing and a sad waste of talent.
The reader is perfect in that his incompetence and lack of effort perfectly mirrors the atrocious writing. A match made in limbo....

Didn't real spend any time listening it was on in the background whilst getting on with other things. There are no real surprises and the 'voice' of the main character annoying, its not offensive and you can have it on without worrying if you miss the odd few minutes.

What could Luke Delaney have done to make this a more enjoyable book for you?

less predictable. I do have his others but felt I was being led through the nose with this one even more than the others. The listener is not given credit for being able to think for themselves rather that the clues to the killer's identity are rammed into your brain. No subtlety at all. I came away thinking that the lead detective Sean, was non too bright for not getting there sooner. So much for his special powers.

Did Robin Bowerman do a good job differentiating each of the characters? How?

Not bad but made Sean sound a bit too thuggish and rude with everyone.

Could you see The Jackdaw being made into a movie or a TV series? Who would the stars be?

Not really. Does not standout in the genre.

I am surprised I have all the other books in my library as will only get another if I really can't find anything else. Ultimately I'm ambivalent as not too awful but not enough to retain my interest. Lift music?