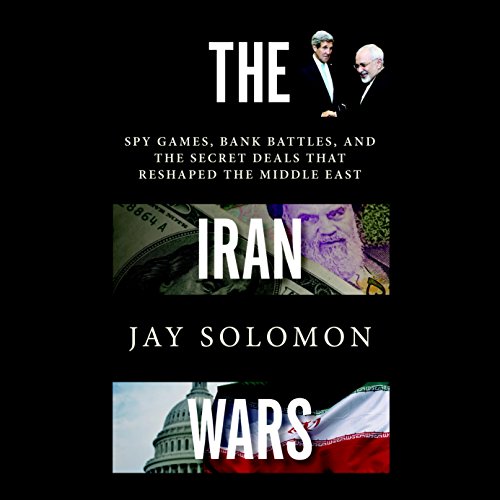 For more than a decade, the United States has been engaged in a war with Iran as momentous as any other in the Middle East - a war all the more significant as it has largely been hidden from public view. Through a combination of economic sanctions, global diplomacy, and intelligence work, successive US administrations have struggled to contain Iran's aspirations to become a nuclear power and dominate the region - what many view as the most serious threat to peace in the Middle East. Meanwhile, Iran has used regional instability to its advantage to undermine America's interests.

The Iran Wars is an absorbing account of a battle waged on many levels - military, financial, and covert. Jay Solomon's book is the product of extensive in-depth reporting and interviews with all the key players in the conflict - from high-ranking Iranian officials to Secretary of State John Kerry and his negotiating team. With a reporter's masterly investigative eye and the narrative dexterity of a great historian, Solomon shows how Iran's nuclear development went unnoticed for years by the international community only to become its top security concern. He catalogs the blunders of both the Bush and Obama administrations as they grappled with how to engage Iran, producing a series of both carrots and sticks. And he takes us inside the hotel suites where the 2015 nuclear agreement was negotiated, offering a frank assessment of the uncertain future of the US-Iran relationship.

This is a book rife with revelations, from the secret communications between the Obama administration and the Iranian government to dispatches from the front lines of the new field of financial warfare. The Iran Wars exposes the hidden history of a conflict most Americans don't even realize is being fought but whose outcome could have far-reaching geopolitical implications.

"The use of the word 'wars,' plural, in the title of this illuminating book tells the story: US-Iranian relations have been troubled for many years. This deeply researched account of negotiations and their implications makes an important contribution to understanding the short- and long-term consequences of how we manage this difficult relationship." (George P. Shultz, former secretary of state)

"An illuminating, deeply reported account from one of the best journalists writing about the Middle East today. Jay Solomon's The Iran Wars offers a front-row view of the spy games, assassinations, political intrigue and high-stakes diplomacy that have defined relations with one of America's most cunning and dangerous foes." (Joby Warrick, Pulitzer Prize-winning author of Black Flags: The Rise of ISIS)

"Wall Street Journal chief foreign affairs correspondent [Jay] Solomon offers an evenhanded look at the backdoor schemes involving the building of Iran's nuclear weapons and the world players involved in and against its machinations...." (Kirkus Reviews)

An important history of the Iran Nuclear Deal

This important book chronicles the history of US/Iranian relations since the 1979 revolution and does an excellent job of describing the amazingly complex process that resulted in the Iran nuclear deal. It is a far from perfect agreement and only time will tell if it will serve its purpose of opening up Iran, preventing nuclear proliferation and stopping a war in the Mideast. This book also describes how interrelated, complex and difficult the process was to bring Iran to the bargaining table. The ability to bring our allies, especially Europe, on board with tremendous banking sanctions coupled with balancing diplomacy with our other allies (Saudi Arabia, Oman, Israel, etc.) makes one hope that he best of the best can direct our countries towards peace in the coming years. Mr. Solomon was a participant as a journalist and historian during these years and his views are important and well written.

A very fair account given the perceived conservative bias of the WSJ that Solomon writes for. This recounts the successes and failures of our decades old relationship with Iran and leaves one with an understanding of both sides. Well worth the time.

Interesting and Insightfull Without Anti-US Bias

What did you love best about The Iran Wars?

Well substantiated story without opinion. Allows the reader to develop his own opinion regarding US policy to countering Iran. Very interesting to learn about the strategy behind economic sanctions and the manner in which they are implemented.

What made the experience of listening to The Iran Wars the most enjoyable?

The inner details of complex international negotiations were revealed in an engaging manner.

The author being a professional journalist has covered the story thoroughly. Its an ongoing episode and the longterm repercussions are not fully understood. History would decide the winners and losers.

All scenes related to negotiations that lasted close to three years.

Jay Solomon’s The Iran Wars tilts heavily towards a confrontational approach to Iran. Light on both analysis of Iran’s strategic goals and the regional context, he cherry picks events and perspectives to make the Iran Nuclear Agreement seem destabilizing and harmful. He glosses over the fact that without the agreement Iran would have the bomb or we would have attacked them. The deal is only a step in the right direction and taking more steps will be difficult. The US needs help understanding Iran so that we know where to pressure them and where to extend a hand. But this book’s preference for rhetoric over analysis fails to deliver such understanding and provides a rationale for simplistic, unreflective positions on Iran.

The contains a great deal of solid information on US sanctions, the negotiation process and Iran’s support of various proxies in the region. It is a shame that such an informed and influential journalized spends so much ink stoking fear rather that increasing understanding.

Here are a few examples:

2003 Iraq War:
Solomon does a great job of describing Iran’s dual approach to the conflict. They supported the democratic process in Iraq because pro-Iranian Shiite candidates closely tied to the Iran kept winning. They simultaneously supported Shia insurgencies, training and arming fighters who accounted for 20% of the American deaths in Iraq. This is how Iran works. They shake with one hand while slashing out with a knife in the other. Doubling dealing is what they expect and respect. Our approach needs to understand this. The nuclear diplomacy worked because of the economic noose we squeezed around the country while talking. But how should we apply pressure now?

Iran’s goals:
Solomon’s says little about Iran’s goal beyond “to defeat the US or destroy Israel.” This doesn’t help us understand the country, which is critical to achieving our ends. Here is a simple version of the country’s goals:

Iran seeks to enhance its regional and global stature; to promote its ideals, including Islamic democracy but it is distinct religiously (Shia vs. Sunni) and culturally (Arab vs. Persian) from most of its neighbors. It has chosen to attract other countries by aggression action with US and Israel.

And so they:
- Continuously harass Israel from via proxies.
- Works to weaken Saudi Arabia, its only serious Arab opponent, to the extent that Riyadh can no longer oppose its regional expansion.
- Keeps Iraq, Lebanon, and Syria fragmented along sectarian lines so that the secular Arab order will face colossal challenges whenever it manages to emerge.

Their goal isn’t to defeat us as much as inflate themselves. Is there a different path for them to the influence that they seek? How might we encourage them to try it?

Green Revolution:
Solomon rightly points out that we had no idea the popular rejection of Iranian election outcome was coming. The Obama Administration took a stance of silence. It was consistent with their approach to the country. Solomon engages fantasy thinking when saying missed a tremendous opportunity. We have helped plenty of countries overthrow their leaders, but it takes planning, support and lots of lead-time. As horrific as Iran’s repression of the protestors was, perhaps our silence avoided a worse outcome. The protestors struggled against both a theocratic government and the military that controls almost half of the economy. Supporting the protestors was unlikely to uproot either power-base and may have just created another Syrian or Libyan catastrophe.

I’m not arguing the Obama Administration made the right the decision but rather that Solomon’s description is idealistic and incomplete. His certainty that we missed an opportunity is founded on sand because he has given us so little content on Iran’s internal factions or external goals. He relies on some undergraduate hope that the people just need to rise up and over through the government. It is an argument made for use by American pundits on American TV but doesn’t help us understand Iran.

Same ol’ partisan fights:
We need to drop the Democratic/Republican split when discussing foreign relations. Far too often we use event overseas as fodder for political battles as home. This is dangerous as we end up acting based on internal politics rather than external realities. Solomon’s book suffers from this penchant as US mistakes under the Bush Administration get minimized while those under Obama’s get amplified. We would be better served by examining the interests of the entire country rather than one party at a time. Or how about we focus on the inherent weakness of switching approaches every 4 or 8 years?

Our relationship with Iran two possible futures: Solomon rightly says that we don’t understand or trust Iran and that there are two possible futures for our relationship with Iran. He describes one future as greater conflict and mistrust. He hopes that future isn’t before us – but never states what the other future is! The other future never even gets named, never mind described. How about Iran positions itself as a trading hub, a cultural center, and a regional model, instead of as an opponent and threat. They build hospitals rather than bombs. We don’t know which future will develop. But if we maintain our bias towards confrontation, Iran is likely to remain an oppositional threat.

My wish is that journalists such as Solomon spend more time discussing how to improve the situation rather than gear us up for war. The seeds of such an approach lie dormant in the book. The US’ dual strategy of diplomacy and tough sanctions worked. We must conduct open dialogue while tightening the screws. The hard part is to know where to place the screws. Solomon describes how effective General Petraeus is in combatting Iran’s use of IRAM weapons in Iraq. He knew the players, the tactics, and their intentions, and, therefore, developed a strong, effective deterrent. But such informed action is very rare in our dealing with Iran. We rarely know what is happening in the country, who has influence, what they want or how they plan to get it. This is the information so needed and the information that is missing in this book.

Inside to the Iran-US relations

Excellent in-debt book! What the media doesn't tell about the two countries relationship with each other.

great and accurate historical Of Iran

perfect historical recent of Iran. interested to read more of this author. It is great

This work paints a broader picture of the conflicting interests of Iran and the U.S. The DIME IOPs are all at work here.

This is a great read for anyone interested in Iran and all the players involved in this delicate issue.