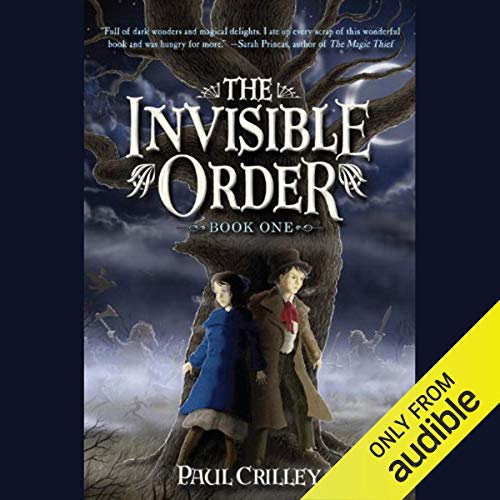 The Invisible Order is the first book in an amazing new series by Paul Crilley, skillfully narrated by Katherine Kellgren.

Emily Snow is twelve years old, supporting herself and her younger brother on the streets of Victorian England by selling watercress. One early winter morning on her way to buy supplies, she encounters a piskie—a small but very sarcastic fey creature that has been cornered by a group of the Black Sidhe, piskies from an opposing clan. She rescues him and unknowingly becomes involved in a war between the Seelie and the Unseelie, two opposing factions of fairies that have been battling each other throughout the long centuries of human history, with London—and England itself—as the ultimate prize.

When the Invisible Order—a centuries-old secret society of humans that has protected mankind from the fey's interference—gets involved, things really start to get complicated.

Now she is the central figure in this ancient war that could permanently change Earth. With no one to trust, Emily must rely on her own instincts and guile to make the right choices that could save her family and all of mankind.

"As portrayed by Kellgren, Emily’s horror, disbelief, anxiety, and humor are clear and perfectly in sync with the narrative. In a story rife with double-crossing, Emily soon finds herself doubting everyone and everything. But listeners are drawn smoothly along the twisted threads of the adventures." (AudioFile)

What listeners say about The Invisible Order

I thoroughly enjoyed this story. Although obviously written for children, it was well-imagined and well-plotted. The world created by the author is consistent - there were no major gaps in logic that kicked me out of the story. The characters were a little obvious, with the bad guys being suitably evil and the good guys being pretty much instantly likeable, but I enjoyed Emily's struggles to understand the events around her and to choose between her heart's desire and the moral high road. The twist at the end was a lot of fun and sets up the next book. I expect I'll read it, too.

For Kids and Adults 8+ - Magical Mystery

I will listen to almost anything that Katherine Kellgren reads. She is wonderful! I hear the voice and can clearly imagine the character. This story beginning reminded me of Jane Eyre or Oliver Twist character. Then the magic happens! Are they good or are they evil? Who can you trust?

I think this story might be too scary for a child under the age of 8 because it does deal with abandonment of parents and some scary creatures.

If you like urban fantasy like Dresden files or Iron Druid you might like this one. It deals with much the same lore, but is toned down in violence and sex for a kid level. My 14 year old likes it well enough. I like the narrator, she very English, but has a wide range for voices for all the characters so you tell who is speaking all the time. Not sure if I will finish the series but I will be getting the 2nd book to see where it is headed.

YA book that is a nice light read for adults and should be enjoyable most children and young adults. The characters are engaging and the story never dulls (I listened to it one day.) Katherine Kellgren, as always, delivers a pitch perfect performance.

I listen to anything and everything that Katherine Kellgren narrates. She is a masterful voice actor and absolutely brings books to life.
This is a fun fantasy. Likeable characters and an easy-to-follow plot. Just a good story to take you away from it all for awhile.

Would you be willing to try another book from Paul Crilley? Why or why not?

No. The Piskies are just too much like regular people. I wish they would do more bizarre fun stuff.

She makes everything come alive.

Do you think The Invisible Order needs a follow-up book? Why or why not?

Would you be willing to try another book from Paul Crilley? Why or why not?

The story was good, the performance was very good, but the author just seemed to pick a place and stop. Clearly it's a series, but I felt that it came to a screeching halt at an awkward place that left me with more questions than resolutions.

Against the ever-popular backdrop of Dickens’ digs, some orphans and street urchins (what else?) get swept up in frantic melee of piskies and fay, betrayal and discovery of “the sight”, save-one-or-save-all quandaries, sprinkled with just enough pisky dust humor to cover the fact that the characters are as flat as cardboard.

Not just for kids!

I really enjoyed this book! The story is well done and the characters are well developed. What really sets this audiobook apart is the narration. Katherine Kellgren really puts you in the middle of all the action, its like your right there in the mix with the characters! I don't know if I would have enjoyed this as much if I had just straight read it, she has a way of conveying whats happening on the page and bringing it to life! The book itself has a good story and some great plot twists, all in all this is a great book for kids and adults. Be warned though, there is a cliffhanger at the end! I recommend getting the second book as well!

OK for young adults - marred by the narrator

Not a particularly complex story, but reasonably well written and should be enjoyed by most young adults. However, although the narrator can differentiate between characters, she lets this down by having two modes. She uses a normal voice up to those parts where she feels there is any form of excitement, peril or intensity, when she begins shouting the dialogue at double speed.
I've listened to many audiobooks and successful narrators do not need to resort to this as a constant means of conveying excitement etc.
I have been unable to finish the book and have returned it!