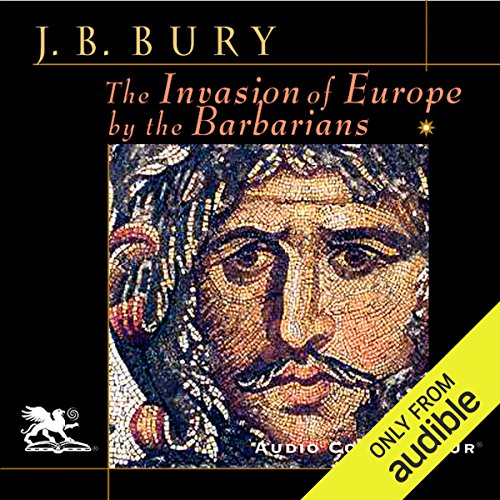 The Invasion of Europe by the Barbarians

The Invasion of Europe by the Barbarians

In the last half of the fourth century, the Roman Empire began to feel the stress of renewed pressure on its borders as Germanic and Asian tribes moved westward. As these tribes settled, they began to form alliances and to convert to Christianity.

But when these very capable tribesmen began to enlist in the Roman military, the empire began to fall under the control of mercenary soldiers. Men like the gifted Vandal Stilicho became supreme commanders and wielded enormous influence at a very crucial period in Roman history. But though the various German tribes were dangerous, they did not menace the Roman civilization in the same way as the feared Huns, who destroyed everything in their path.

In this brilliant history, you will learn why Atilla turned his devouring hordes into Gaul, and how he came within a heartbeat of controlling all of Europe. Discover the truth behind the heroic legends of powerful men like Alaric, Theodoric, and Clovis, and the amazing journeys of tribes like the Visigoths, the Ostrogoths, the Franks, the Vandals, and the Lombards. And as you listen, you will also come to understand the underpinnings of the modern European nation state.

What listeners say about The Invasion of Europe by the Barbarians

Fascinating read, a gold mine of information

This is an excellent overview of the various barbarian peoples that swarmed over Europe as the Roman Empire waned. Want to know who were the Visigoths, the Ostrogoths, the Vandals, the Franks and the Lombards? Eastern Germanic vs Western Germanic tribes? What were the legacies and impact of these groups? This book covers all that and more.

This was a very enjoyable book. I felt like I now have a much clearer idea of who the Barbarian tribes were, where they came from, and what prompted them to migrate into and take over many of the former areas of the Roman empire. The author does a great job looking at this process from beginning to end and highlighting important groups and events along the way. Some points of note, a few people groups and events that are not described in great detail are the peoples of the Celts, the peoples of the Slavs and their migrations, and the barbarian invasions/migrations to the British Isles. Overall and excellent read and I would highly recommend it if you are interested in the topic.

This sounds like transcript from a lecture. In a lecture the auditorium would have had slides, white boards and other visual accompaniments. That is truly missing here.

Great perspective, but a bit outdated

I listened to the first part in paralell with the history of Rome podcast. I like that this does not end at the end of the 5th century, but looks at the migrations before and after as part of the same process. Some parts are outdated, I am sure there are newer results. The author likes to spend much time on his own research topics. I missed an overview from the end. I liked the sound effects at the beginning and end of chapters. :)

The title is fine- but there should be a way to skip to chapters and pages.. Also- Audible doesn't tell you that you have to go into 'my account' to find the link to the library- It just tells you that you have to want to download the app.. Once I found the 'library' it was ok to use- except for not having control of what pages it is reading-

Corn in North Africa during the Roman period?

I am fascinated with the subject, but did not get much out of this audiobook. Since I listen to audiobooks mainly in the car or while walking or doing mindless busy work, I had difficulty keeping up with names and places. My geography knowledge is not up to par and I had trouble visualizing the movement of the various germanic groups around europe and asia minor. Listening with an atlas in my lap would have helped, but is just not practical. I hope the reader substituted corn for grain by accident (more than once), otherwise it casts doubt on the accuracy of other details in this history.

As the previous reviewer has mentioned, it's a little dry. But it is packed with information and broken up into nice-sized chapters of 20 minutes or so each.

I have a limited passing interest in the subject, and found it an interesting listen. But it's clear from parts of the book that it was written soon after WW2, making me wonder if some of the theories presented have in fact been replaced thanks to modern research into the period.

Pretty dry stuff delivered by a supercilious academic. OK if you are studying a masters in the subject.