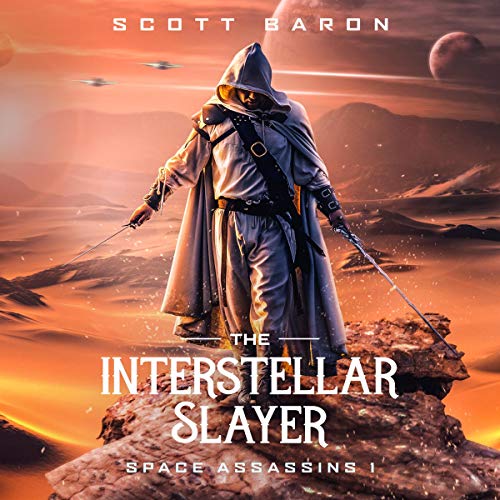 Kill or be killed, that was the assassin's way. It was an easy choice. That is, unless you found yourself fighting your former lover.

Hozark was a master assassin, one of the finest the galaxy had ever seen. But when a routine contract goes horribly wrong, it becomes clear something sinister is at play. A powerful foe is hunting slayers, and only one weapon can end the bloodshed. A legendary vespus blade.

But there's just one enormous problem. Those with the arcane skill to craft them all perished long ago. Or so it is believed. But romors tell of one who may yet live, and if Hozark hopes to prevail, he will have to pursue those whispers to the ends of the galaxy. For not only does his own survival depend on it, but that of his order as well.

What listeners say about The Interstellar Slayer

Baron is back with a new series!

Scott Baron is becoming the “go to” for compelling science fiction stories that blend fantasy and technology into an action-packed adventure that works and keeps the listener engaged. The two previous series, “The Dragon Mage” and “The Clockwork Chimera” have been well reviewed and received in the audiobook community. To many, it was a nice surprise seeing a new series now available and three of the audiobooks already available on Audible. Thanks Scott, for giving us all something in a year that has not been kind to many. I was a big fan of the previous narrators, yet I can say that I’m more than happy to have Eric Bryan Moore as the narrator of this new series. I have reviewed many of his other narrated works and found them all professionally performed — this audiobook is no different. Bring together strong writing and wonderful narration and you have a great start to a new science fiction/fantasy series. If you are searching for something new or you have listened to any of Mr. Baron’s previous works, I highly recommend you give this new series a try. I was not disappointed and I’m sure you will not be either. Lastly, I wanted to call out the very good cover art of this series and the other works written by Mr. Baron, they often tell a story themselves. So, let us dive into this new series and learn what the first book is about.

The first book in the new series, and the one we will be reviewing here, is “The Interstellar Slayer” which is more of a novelette introducing the series along with all new characters. This audiobook is about three and a half hours long, but it is a good primer to the new series. The first book in the series is designed to whet your appetite for what is to come in future audiobooks. I would highly recommend you listen to the “Dragon Mage” series prior to this one. Yet, it is good to know that this is a standalone series and because of this, it is not a requirement to know any of the previous series. I do like that having the extra knowledge from the other series helped me to jump right in and feel comfortable with the story. I do not recall the length of time between this series and “The Dragon Mage” series but I think of it as a prequel similar to the Star Wars series. The focus of this series is on the well respected and rightfully feared space assassins group called the Wampa Ghalian. These assassins are the best of the best, but powerful magic and hidden agendas will impact this mysterious assassin group and potentially change the future of these highly trained killers. I found it interesting to know this group is monetary focused, but they also have a moral code that supersedes any amount of financial offering.

Scott Baron has the ability to create new and exciting worlds, people, and situations that feel different from others I have ever listened to. He is a visual writer and I’m a visual learner, so I find his books very entertaining and engaging. The characters are often complex and purposeful, and many are likable as well. If you enjoyed the banter from his previous stories, there is plenty in this book as well. There are a few characters one might expect from the other series making an appearance in this series as well. The listener will also learn more about the special waters Charlie first discovered during his crash landing in this new world from “The Dragon Mage” series. We also are given a better view in into the secretive Council of 20 referenced previously as well. The author is able to blend both technology and fantasy, yet this initial book is more fantasy focused even with space travel being accomplished using spacecraft, etc.

The audiobook’s narration is expertly performed by Eric Bryan Moore; I have reviewed a few of his other narrated audiobooks. I enjoy listening to his voice and he easily becomes the main character’s voice. He does an exceptional job voicing the many different characters and creatures we find in the book as well. The volume is consistent, there were no audio artifacts that I recall, and no mistakes in swapping character voices which has been a common issue with some narrators. I look forward to hearing the other audiobook in the series and am happy to see Mr. Moore a part of it.

For parents and younger readers, this book contains quite a bit of profanity (as with other Baron books) the farther the story progresses. This audiobook includes some light romance along with alcohol use, not uncommon in this genre. If you are at all offended by any of these, I cannot recommend the series. I was hoping to be able to recommend this for my younger readers, as I think many would enjoy the series, but I would have to say it is more geared towards more mature listeners.

In summary, Scott Baron’s books follow a successful writing and blending style that make enjoyable science fiction stories that are well-rounded and appeals to many. His ability to use picturesque worlds and complex characters makes for an engaging adventure filled with action and mystery. Add solid narration by Mr. Moore and you have the start of a new and exciting series I’m looking forward to listening to. I can say that I would recommend this audiobook and potentially the series, to those who enjoy dragons, magic, and covert group.

Disclaimer: This audiobook was provided by the author, narrator, and/or publisher in exchange for a non-bias review.

Mixing Sci-fi and fantasy to create something new

I enjoyed listening to this book. It is interesting how Scott Baron was able to bridge the technology gap between hardcore sci-fi and fantasy and still have everything work without seeming strange. As this novella takes place before book 1 it is a good start to what I think will be a fun series.

Not at all what I expected

When you can describe the book as "A magic vampire assassin teams up with a space pirate to kill his ex" you wouldn't expect it to be played with a straight face, but it is, and it works amazingly!

interesting mix of fantasy and sci-fi

The mix of strongly magic based action in a setting that would otherwise be more reminiscent of Dune or some other high sci-fi universe makes for an unusual and enjoyable read. The world is creative, the characters distinct and well crafted, and the story flows well for a novella.

All in all, a well told space opera with a nice fantasy twist.