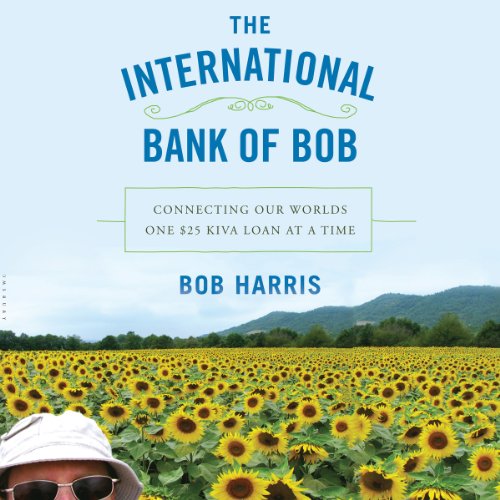 The International Bank of Bob

Connecting Our World One $25 Kiva Loan at a Time
By: Bob Harris
Narrated by: Bob Harris
Length: 9 hrs and 33 mins
Categories: Biographies & Memoirs, Business Leaders
5 out of 5 stars 5.0 (2 ratings)

The International Bank of Bob

Hired by ForbesTraveler.com to review some of the most luxurious accommodations on Earth, and then inspired by a chance encounter in Dubai with the impoverished workers whose backbreaking jobs create such opulence, Bob Harris had an epiphany: He would turn his own good fortune into an effort to make lives like theirs better.

Bob found his way to Kiva.org, the leading portal through which individuals make microloans all over the world: for as little as $25-50, businesses are financed and people are uplifted. Astonishingly, the repayment rate was nearly 99%, so he re-loaned the money to others over and over again. After making hundreds of microloans online, Bob wanted to see the results first-hand, and in The International Bank of Bob he travels from Peru and Bosnia to Rwanda and Cambodia, introducing us to some of the most inspiring and enterprising people we've ever met, while illuminating day-to-day life-political and emotional-in much of the world that Americans never see.

Told with humor and compassion, The International Bank of Bob brings the world to our doorstep, and makes clear that each of us can, actually, make it better.

What listeners say about The International Bank of Bob

As a Kiva lender for last few years I was very keen to read this book as soon as it came out. I bought the hardcover version from Amazon (in then absence of audiobook)... read the first two chapters and then remembered why I gave up printed reading.

Then my late Xmas present arrived when I found this written-and-read-by version on Audible in the new year. What a treat. Bob Harris is extremely down to earth and easy to listen to as a reader. Coupled with the already fantastic content of the book itself and you're in for a funny, wild, entertaining ride into the World of micro finance.

I love that Bob covers the entire micro finance supply chain from lenders like me, through Kiva and it's fellows, the MFI's to The Borrowers... and beyond.

As someone who's made +300 Kiva loans, I gained from this book a deep and fascinating appreciation for the role of Kiva Fellows and the MFI's. (Micro Finance Institutions).

Thanks to Bob, Kiva, The Fellows, The MFI's and The Borrowers for making this book possible.

I really enjoyed this. Despite knowing KIVA, I loved the author's perspective, his humility and his sense of humor.
Great read! Great organization!

In his own words, Bob Harris tells a powerful perspective on implemented solutions to social inequity. This style is at points long-winded; nonetheless, the lessons learned are incredible. Also, because he writes like he talks, the stories he shares are easier to share with others. I will reread this throughout my career -both the ups and the downs- to find both energy and preserve my own! Enjoy!