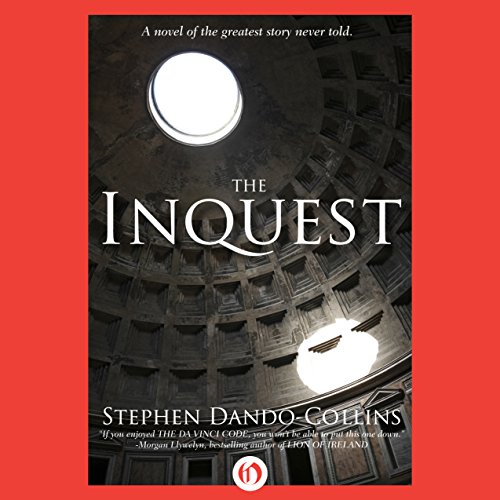 In the time of Vespasian, just after Rome has crushed the Jewish Revolt, Julius Varro, a Roman Questor (an investigating magistrate ) is commissioned to investigate the story that a Jew rose from the dead after being crucified in Jerusalem.

Because the fast-growing Nazarene sect founded by the martyr's followers is becoming a threat to the stability of the region, there is much riding on debunking the story. Questor Varro has to deal with the evidence that goes back 40 years, with most witnesses long dead and the living ones lying to protect themselves. But he is intent on producing a report that will demolish the claims of these religious fanatics. His investigation stirs intrigue, religious passion, and violence, to say nothing of an attraction to a beautiful Jewish slave girl. Questor Varro's report methodically destroys the myth fueling the newborn Christian movement. But then an extraordinary event occurs that changes everything.

What listeners say about The Inquest

Flawed novel well worth listening to

Would you listen to The Inquest again? Why?

No, I would get little out of listening again to a novel that is not a literary masterpiece.

It presents an alternative version of the beginning of Christianity that is, to be sure, entirely fictional, yet stimulating and on the level of speculation, plausible.

Furthermore, it gives a good sense of the brutality of the times and of the hatred between Romans and Jews in the first century AD and thereafter. As in Britain with the revolt of Boudicca, it was the egregious behavior of a Roman official that set off the uprising, but the behavior of the rebels was so atrocious that it is impossible to maintain one's sympathy for them. From a modern perspective, no doubt people generally behaved in shockingly bad ways and few had second thoughts (though behavior today is hardly better when there is armed conflict); the novel evokes this vividly.

Most of us have no direct experience with war. I think we should make up for this by exposing ourselves to historical account and to historical fiction so as not to live in rosy illusion in regard to what human beings are capable of; this gives more substance to our personal morality and to our social and political stances.

Have you listened to any of Roger Davis’s other performances before? How does this one compare?

No. He is a good reader.

As a novel, this work is less than satisfying, especially the ending. However, I did enjoy the novel and for the reasons stated above, would recommend it notwithstanding its failings.

A long ride to no where!

A lot of dialogue, a lot of names, places and dates. You master all that but then deflate on the terrible ending. A great listen, a cop out of an ending