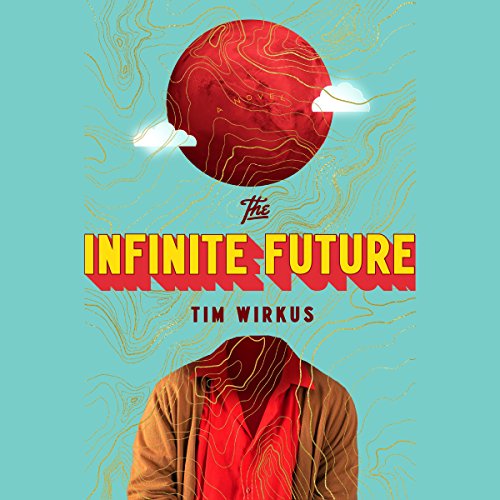 An exhilarating, original novel, set in Brazil, Idaho, and outer space, about an obsessive librarian, a down-at-heel author, and a disgraced historian who go on the hunt for a mystical, life-changing book - and find it.

The Infinite Future is a mind-bending novel that melds two addictive tales in one. In the first, we meet three broken people, joined by an obsession with a forgotten Brazilian science-fiction author named Salgado-MacKenzie. There's Danny, a writer who's been scammed by a shady literary award committee; Sergio, journalist turned sub-librarian in São Paulo; and Harriet, an excommunicated Mormon historian in Salt Lake City, who years ago corresponded with the reclusive Brazilian writer. The motley trio sets off to discover his identity, and whether his fabled masterpiece - never published - actually exists. Did his inquiries into the true nature of the universe yield something so enormous that his mind was blown for good?

In the second half, Wirkus gives us the lost masterpiece itself - the actual text of The Infinite Future, Salgado-MacKenzie's wonderfully weird magnum opus. The two stories merge in surprising and profound ways. Part science fiction, part academic satire, and part book-lover's quest, this wholly original novel captures the heady way that stories inform and mirror our lives.

“Stupendously inventive and rewarding…The second half of Wirkus’ tale is…a sci-fi epic which echoes Battlestar Galactica and the fiction of Ursula K. Le Guin in equal measure…Especially well suited for fans of Jonathan Lethem and Ron Currie, this work announces Wirkus as one of the most exciting novelists of his generation.” (Booklist, starred review)

"Roberto Bolaño meets Ursula K. Le Guin meets James Hynes meets, um, Kilgore Trout? I'm having a difficult time being clever in the shadow of having read Tim Wirkus's magnificently audacious The Infinite Future. How about this: it's a book about the power and melancholy magic of the stories we tell and of the stories we live." (Paul Tremblay, author of A Head Full of Ghosts and Disappearance at Devil's Rock)

What listeners say about The Infinite Future

Just a head's up, it might be worth noting that this book is effectively a piece of Mormon literature as much as it is pseudo-sci-fi. Most of the characters are practicing mormons, and while clearly not a tract, Mormonism is discussed and defended and a lot of Mormon dogma gets milled over (a central character is Mormon President). Your mileage may vary, I never felt like I was being preached to or converted but you will also notice a lack of things outside of the Mormon reckoning, like cussing, sex or the existence of homosexuals. Some readers will have no problem with this, others who might should consider themselves tipped off.

Not an Even Handed Read

I fell in love from page one to about just over a quarter of the way through the novel. There seems to be a lack of focus. Props for trying to do something different, I guess. But the story devolves into something completely different from the beginning. I felt ripped off by it. I also found the audio production distracting. There were times when a different voice would represent the character, and time ls when the narrator would speak that same character's "lines."
And the name tags, all the "he/she said" was a little out of control. I'd give six stars to the beginning, 1 to the rest. I gave up with 6 hours left.

I wanted to love this story. Rather than being caught up in the telling, though, I was often left thinking about everything I didn't like about it---losing the thread of the story itself. What could have been a rich tale was flattened out by telling the story rather than showing me what characters said and did. The author sprinkled so many random GRE words throughout that I wonder if it was some kind of challenge in his doctoral program. The vocabulary did not fit the characters or the narrator, so too many words stuck out---kicking me out of the story again. I didn't mind the plot, but it deserved better writing. This seemed a lot like a student novel, though I would think that peer review might have improved it significantly if it was written during his graduate degree in creative writing. The promised "full cast" performance was more of a single, narrator's voice with occasional pops of color from other voices. Sometimes the narrator spoke in other character's voices, and sometimes the other voice actors spoke their lines. I wish the author had held on to this idea and rewritten it later. Two stars is generous for this novel.

Did not end well

I got this book because the author went to BYU and I wanted to support that. I also love Syfi . But this book really wandered around and I didn’t like the ending at all! What the heck was that about?

Loved every minute of this book. Literary, sci-fi, quest journey, philosophical - all the things I like. It is many books in one, many layered. There are jewels to be discovered and it’s a story that will stay with you long after the cast list is read out. I will definitely be listening to this again.

Weird, but not in a good way

I was drawn to this book because it was described as weird and I like weird. However, there is nothing weird about it other than the mystery of how it got published.

The basic story is three people go on a quest to find a lost science fiction masterpiece and it's author.

The trouble is the quest is dull and the lost masterpiece is rubbish.

I get that there's another story about people trying to reconcile their religious beliefs, their church and their own feelings and experiences, but to be honest I couldn't care less, I'm not engaged with the characters enough to care and the religious mumbojumbo does not interest me in the slightest.

Much of the writing reads like it was produced by a teenager who has just discovered adjectives and was given a thesaurus for Christmas, someone who will never use a simple word where a long and obscure one can be used instead. It doesn't make the writing style very pleasant to listen to.

This is one that will be going back for a refund.