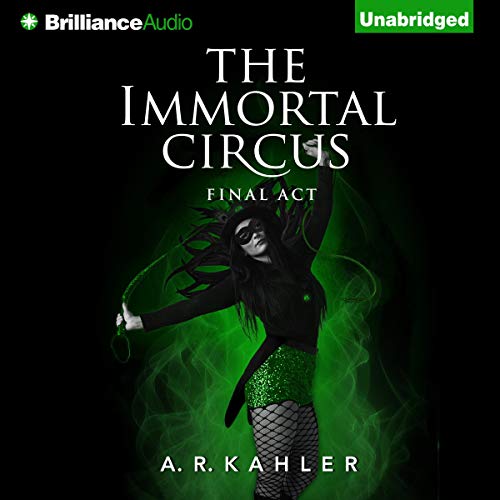 By: A. R. Kahler
Narrated by: Amy McFadden
Free with 30-day trial

Despite Vivienne’s broken heart and deadly truths, the show must go on at the Cirque des Immortels. But it takes more than glamour and sex appeal to keep the Big Top running; without the magic and support Viv came to rely on, the circus is in danger. Now the troupe verges on rebellion, the war between Mab and Oberon rages on, and a horrifying menace looms - with Vivienne stuck in the middle of it all.

When Mab’s manipulations put others at risk, Viv has to decide where her heart lies. Everything depends on her choices. How can she know her true desires? And will she have what it takes to fight the demons she must face?

What listeners say about The Immortal Circus: Final Act

the best of the series! please be another book!

If you could sum up The Immortal Circus: Final Act in three words, what would they be?

Lilith is my favorite, just because the author and narrator did really well on her character and details.

the final part is my favorite, please say there is another book!!! Ending sounds open, where the author could leave it as is or make another set of books.

Great read. The first book was hard to get into, second was much better and this book makes all the time worth it. Read this series.

The last book has some issues. (Spoiler alerts)

Several things bothered me about the book towards the end.

Vivian got angry at one of the shifters who was refusing to help put up the tents. They demanded to be released from their contract. All this time vivian thought she had no control over it. She got angry and then poof the contract was changed. If you read it carefully you will realize that it was in fact a change, not a release clause of the agreement. First of all, the contracts cannot be changed except on full moons. This was not one of those days. Second of all, it needs to be done with the blood of the person the contract is with. It's indicated by the scene where vivian signed her own contract and of course the glimpse in the future in this third book of her interactions with a friend that requested cancellation. The author isn't consistent when it comes to the blood requirement of the circus contracts.

Vivian had an easy out by going to tir na nog once she made the bargain with oberon. It happened only a chapter or 2 before so it's not like she forgot about it. As soon as she made the Oberon bargain she could have named the entire winter court as her friends. A few scenes after that she escaped him which gave her the opportunity to go directly there. That would have made her the hero, sacrificing her one human life to have any happy ending in a version of heaven and at the same time saving the fairies from endless war and all of the humans from a demon apocalypse bu na we can't have people making logical decisions.

Vivian wanted her powers back and mab demanded a super high price for it talking about some nonsense of balance etc. It's total b.s. logic. Vivian wanted to kill mab's enemies and save the world which includes everyone under mab's charge yet mab can't agree without this stupid requirement. It absolutely ridiculous. All vivian had to do was to reach out and grab the arm of someone she rescued for a few seconds. It's a weak justification at best.

The world set up by the author said fairies cannot break their word yet Oberon did when he attacked the camp and harmed vivian's friends before her second incarnation. I can understand violations of pacts and super powerful beings who are able to fight magic bindings but i got the impression that the author was trying to tie things together. The scene where Oberon and vivian made one emphasized how intrusive and powerful the agreement was but then a few chapters latter it's like the requirement that he not harm her friends never existed.

Mab told the 3 attacking demons how they were really made but did those demons turn on their maker, no they didn't. They attacked mab in spite of the fact that the only thing that allowed Oberon to control them was that anger.

The last thing about the book that bothered me, towards the end, an ally of vivian stopped time telling her she cannot kill all the enemies at once so she needed to make a sacrifice to do so. Hey look time is stopped and all my enemies are just standing there defenseless. I can talk with you wave my hands around take a step or even take the bad guys out one at a time but oh no, I can't because that would be too easy.

I absolutely loved the books but i think the person who checks continuity missed a few things.

I didn't give a very good review of part 2 of this trilogy, but Part 3 was fantastic. Kingston came back - duh Immortal Circus- Melody was discovered to be shape shifter, and all was right with the world. The narrator of all three books was so on point with each voice and made the story exciting and believable. I would love to have a family like this circus was minus, of course, Lillith. I cried at the end - clearly, my favorite characters were Kingston, Viv, and Melody.

so much emphasis on the final battle and it was anticlimactic and then entire ending was a let down.

I loved this story but i wanted it to end a different way I would also like for it to have been more in the series.

please make a movie or show out of this series! or even better another book?! loved it.

I almost didn’t continue from the first book because it was predictable, the second one was less predictable, and this one made turns out of nowhere. It’s not the ending I expected but I love when a book surprises me. Viv became a little too “I need to end up with man, (boohoo)”, but that’s for some people

To prevent spoilers all I will say is that this is the conclusion of Vivian, Mab, Kingston, and Mel's journey that started in Act One. There were sooooo many new twists and turns. I did feel like it was drawn out a bit longer than it should have been and that the ending was somewhat anti-climactic but over all this story really throws you into the fantasy world.

This specific video review will be included in the August 2018 wrap-up.

It was interesting, but overall I was rather unhappy with the ending of the book.

The Immortal Circus: Final Act
Cirque des Immortels, Book 3
By: A. R. Kahler
Narrated by: Amy McFadden
This has been a wonderful series and great but unexpected ending. Lots of supernatural beings, great fighting, touch of romance, and suspense.
The narrator stayed consistent throughout the series and was marvelous! Wonderful series!

I have loved everyone of these ,the characters, the atmosphere it just great I can not say to much being the third act but you must read them the narrator was perfect 😉😉😉😉