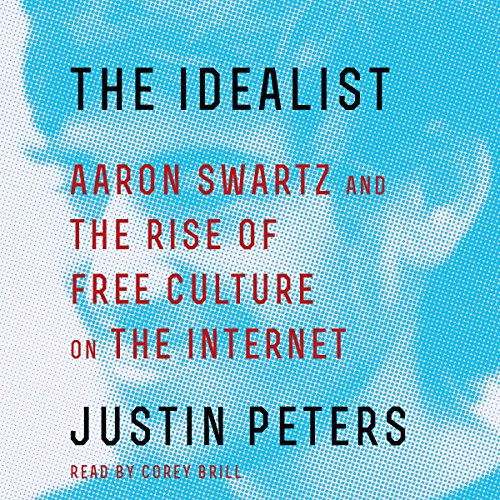 Aaron Swartz and the Rise of Free Culture on the Internet
By: Justin Peters
Narrated by: Corey Brill
Length: 9 hrs and 3 mins
Categories: Non-fiction, Social Sciences
4.0 out of 5 stars 4.0 (2 ratings)

A smart, lively history of the Internet free culture movement and its larger effects on society - and the life and shocking suicide of Aaron Swartz, a founding developer of Reddit and Creative Commons - from Slate correspondent Justin Peters.

Aaron Swartz was a zealous young advocate for the free exchange of information and creative content online. He committed suicide in 2013 after being indicted by the government for illegally downloading millions of academic articles from a nonprofit online database. From the age of 15, when Swartz, a computer prodigy, worked with Lawrence Lessig to launch Creative Commons, to his years as a fighter for copyright reform and open information to his work leading the protests against the Stop Online Piracy Act (SOPA) to his posthumous status as a cultural icon, Swartz's life was inextricably connected to the free culture movement. Now Justin Peters examines Swartz's life in the context of 200 years of struggle over the control of information.

In vivid, accessible prose, The Idealist situates Swartz in the context of other "data moralists" past and present, from lexicographer Noah Webster to eBook pioneer Michael Hart to NSA whistleblower Edward Snowden. In the process the book explores the history of copyright statutes and the public domain; examines archivists' ongoing quest to build the "library of the future"; and charts the rise of open access, copyleft, and other ideologies that have come to challenge protectionist IP policies. Peters also breaks down the government's case against Swartz and explains how we reached the point where federally funded academic research came to be considered private property, and downloading that material in bulk came to be considered a federal crime.

The Idealist is an important investigation of the fate of the digital commons in an increasingly corporatized Internet and an essential look at the impact of the free culture movement on our daily lives and on generations to come.

What listeners say about The Idealist

An illuminating look into the world of Open Access

The book, while sometimes overly verbose to the point of esoteric obscurity, successfully plumbs the depth and history of the dissemination of information, both across the USA and the world at large. It paints a very balanced picture of the current state of information consumerism and why existing power structures seek to preserve the scarcity of information.

The history of Copywrite - the prononents, critics and martyrs alike - makes for a very eye opening encapsulation of something that should concern us all.

Swartz's narrative is successfully woven throughout and handled without bias - a man ahead of his age, ahead of our time and perhaps not belonging to the current cultural zeitgeist he found himself in, Swartz's contribution to 21st century freedom of speech is palpable and his loss a great tragedy.

Nothing New But a Good Reminder

I read the Slate article by Peters that this book was based on a few months after Swartz death. I am not certain why this sad story captured my attention. I was vaguely aware of Schwartz before his death, I think because of my long time interest in Creative Commons and the SOPA/PIPA fights. But when I read of what seemed to be a senseless and unexpected suicide, I felt compelled to understand why someone so brilliant and talented believed that ending his life was his best option.

The book did not delve much deeper into Aaron Swartz's short life or tragic death. It provided a little more background about his early years. But the many unanswered questions - like why did he download the JStore articles, what did he hope to accomplish and why did the US Attorney feel compelled to so drastically overreach in their charges- are not answered in this book. And the most tragic question - why did he feel compelled to end his life is also left unanswered.

However, after reading the book I believe that those questions were not answered, because there are no answers, at least as respects Swartz's actions. We will never understand it. I assume the US Attorney could provide an explanation for her excessive overkill actions in this case, but don't expect she ever will. So while this book revealed nothing new, I think it would have been unrealistic to expect it to. But I still recommend the book and believe it is worth reading, simply because we should never forget how fragile we are and how extra-fragile the truly gifted among us seem to be.

I am not qualified to comment on the complexities of sociology, nor am I learned enough to understand the entanglements of copyright law, but I can say that this is a story of tragedy, greed, love, passion, and politics.

Interesting segments of information management and Internet history color the tale of a brilliant mind subsumed by a society unable and incapable of accepting his positions however obvious they were.

The book is a must read for sociologists, librarians, industrialists, scientists and talented youth aspiring to make the ultimate difference ... and possibly save humanity from its clear course of repeating history yet again.

Loved it. A little academic at times but hugely interesting in taking us from the beginnings at copyright law with print in early America all the way up to Aaron Swartz and the internet/free culture today. Balanced too - doesn't attack anyone.