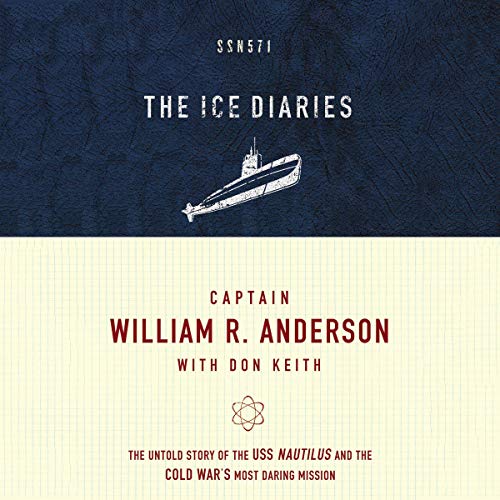 The greatest undersea adventure of the 20th century.

The Ice Diaries tells the incredible true story of Captain William R. Anderson and his crew's harrowing top-secret mission aboard the USS Nautilus, the world's first nuclear-powered submarine. Bristling with newly classified, never-before-published information, The Ice Diaries takes listeners on a dangerous journey beneath the vast, unexplored Arctic ice cap during the height of the Cold War.

"Captain Anderson and the crew of the USS Nautilus exemplified daring and boldness in taking their boat beneath the Arctic ice to the North Pole. This expertly told story captures the drama, danger, and importance of that monumental achievement." (Capt. Stanley D. M. Carpenter, Professor of Strategy and Policy, United States Naval War College)

"Few maritime exploits in history have so startled the world as the silent, secret transpolar voyage of the US Navy's nuclear submarine Nautilus, and none since the age of Columbus and Vasco da Gama has opened, in one bold stroke, so vast and forbidding an area of the seas." (Paul O'Neil, Life Magazine)

What listeners say about The Ice Diaries

a great book about brave men

this is a great book, about brave men, who changed the world. the first hand account of this new technology is inspiring. The bravery needed to travel beneath the Arctic ice is remarkable. we owe a lot to these great adventures

From the viewpoint of this Old Antarctic Explorer, (OAE) [89/90, 90/91, 91/92], this true story of exploration and triumph at the Other Pole decades earlier is truly awesome. From my experience on The Ice, I can recall & feel the cold in my bones as Anderson clearly describes the Ice flows overhead, and the light filtering through them. I loved the detail, & tho others may find it occasionally dry, I encourage you to pay attention to the unclassified technical descriptions he gives. This book is certainly worth a few short hours, especially for today's history-ignoring younger generations.

I was ten when Nautilus accomplished this remarkable, dangerous feat. I recall the excitement of the news reporting. This book, however, reduces those risks and that accomplishment to diary format, written by the brilliant men who were there, and the result is boredom. A better writer could have taken the material and made it absorbing and compelling. In a literary sense, this telling is a waste of a wonderful achievement.

An Ice Cold Thriller About Submariners

I really enjoyed this book. The narration was really good. I served in the US Navy for six years and would have felt honored to be on his crew anytime anywhere with one small exception. I was not a submariner, but other than that I would have been grateful, as he really honored his crew. So spoiler alert, the crew received the Presidential Unit Citation which is the highest group award issued to US Navy and Marine Corp Units. Rare to get for service unrelated to being in combat. I appreciate that a big deal was made of it and actually presented by President Eisenhower. My riverine unit in Vietnam received one (two actually because I was in two different awarded units). Mine was “presented” to me by a Yeoman (clerk) by way of saying. “ Oh looks like you can wear the PUC ribbon, I guess you can but one at the commissary ( store) when you get stateside”.

Anyway, after hearing this story I feel the need for adventure. I am not kidding. I already pulled out my Milepost book for Alaska and charted a course, on the road, for the Arctic.

Too much technical stuff

I really wanted to love this book as I love historical books. I was hoping to read about a great sea adventure! What I got was a book that was full of a lot of technical things which of you are in the military I guess you will love this? The actual sea adventure part really didn’t begin till the last 4 hrs. It was okay but still not what I was expecting.

Overall, it was interesting to hear how we finally accomplished being the first ship/submarine of any type to actually cross the North Pole and just how difficult it was and why.

The Captain, William Anderson, just made this a bit too sappy for me as well. He never has a bad word to say about ANYONE. Not his commanding officer nor anyone who works under him, it’s all roses all the time and I just don’t see how that’s possible.

I didn’t particularly care for the voice of the person reading the book and can’t exactly put my finger on why?

I really enjoyed listening to this piece of American History. The mission was meticulously documented, the story is well written, and I especially enjoyed the reader.

Heroes and patriotism are in short supply today

Unfortunately it would be hard for most of our young people today to relate to someone whose patriotism is more important than their video games or other things they feel are important. It would also be hard for the youngest to feel the respect that should be placed in the president of the United States.

As a submariner myself, this book really hit home. Even today 571 is a legendary submarine hull number. Unfortunately my boat never went under the ice while I served onboard, so this adventure was a delightful experience to listen to. I cannot recommend this story enough to anyone who is even remotely interested in military or even science fiction adventure stories.

I was 12 years old when the Nautilus made the North Pole voyage . It made me more grateful of being an American knowing that the Navy was Conquering the last great ocean. I remember being scared of the Soviet Union and this book made me proud & appreciate that our Navy had and still does have their best and brightest at work for our safety and Liberty.

Read This and Then Red Storm Rising, Wow

The book is great.

These Navy guys are problem solvers and can achieve greatness. This book covers the eccentric personality of Admiral Rickover. Has the brilliant exchange with a contractor. "If your son was on this boat, would you prefer a gasket or a welded seal?"

The book understates the daring complexity of navigating the arctic. The depths, the moving ice, the magnetic field, and the complexity of mobility for a massive ship. Awesome.

Also, if you are a Red Storm Rising reader, you know that the value of this exploration was massive. The strategic edge that Captain Anderson provided was huge, is huge.

Great listen to the adventures of SSN 571. The first Atomic Submarine of the US Navy and first in world history.