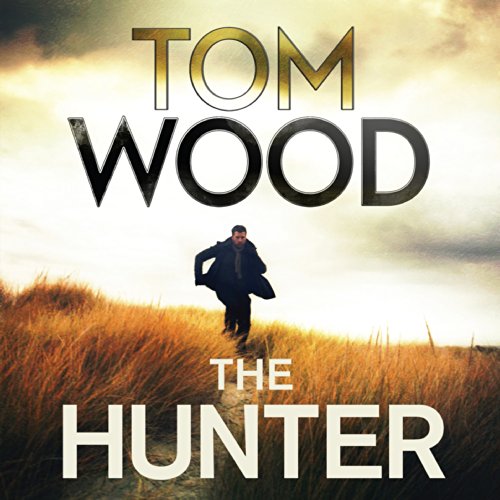 The suspenseful new release action thriller audiobook The Hunter is the first installment in the tantalising series Victor the Assassin, written by Tom Wood and narrated by acclaimed voice actor Daniel Philpott. Trained assassin Victor is on the run from powerful enemies that want him dead. The job in Paris was a set-up. Now he’s been thrown into their sights and has never been so close to danger. Victor is charming, elusive and entirely irresistible. The ladies that flock to him are beyond beautiful. This story is one that will lure you in and keep you captive. Available now from Audible.

"Jack Reacher meets Thomas Crown in this electrifying thriller." (Simon Kernick)
"A nonstop, breathless, trimmed-to-the-bone thriller with action sequences that are absolutely state-of-the-art. It's the best chase novel I've read in years." (Joseph Finder)
"An impressively intricate thriller.... The scenes are vivid and the plot revelations parcelled out at expert intervals.... Exciting." ( New Yorker)
"A superlative debut... Thriller fans will be eager to see more from this bright new talent." ( Publishers Weekly)

What made the experience of listening to The Hunter the most enjoyable?

Tom Wood appears to have struck the perfect balance between detail, realism and story. This is a superbly written novel. The story is a little Dexter-like: you can't help but loving the bad guy. I have already downloaded the next book in the series, I just hope Tom keeps them coming!

Listening to a story should help one sleep

Listening to stories at night has helped me deal with chronic pain, not this one! It was so compelling I had to listen to the whole story. The ending, the last half a chapter was disappointing but overall a brilliant story read expertly. Thanks

This novel is totally unbelievable on every level. Russia have mounted a massive effort to salvage the missiles. There is no way the CIA would not have known about this kind of operation. No one survives seven or more gunfights with professional killers. This novel is a teenage boys comic book.

I gave been enjoying David Baldacci and Vince Flynn novels.
Protagonist is a good guy.. You want him to win.
This has the main character as an assassin out for No 1..
So my thoughts were of Day of the Jackal .. (didn't like the assassin in the movie.) and a little reluctance .
However reasonable quickly found it an enjoyable and fast paced action book
Just ordered the next one in the series .
Great narrator. Good variation of pace during action/suspense parts ..
Accents not overdone but distinguish well the different character .
(helps that there are various nationalities in play) ..

This was a great story, introducing our main character and the lifestyle of his "work".
Looking forward to the following books in the series.

Narrator made the book fun and interesting .
The hero Victor is over the top but entertaining.
Reading it would probably be a pain.

The story is riveting to say the least, the characters are well distinguished by the narrator and I found myself clued to the earpiece. Highly recommend this book.

Very detailed but maintained the intrigue and fast pace

Have you listened to any of Daniel Philpott’s other performances? How does this one compare?

No first one ... but very well narrated

Was not disappointed I tried a new writer. Will be reading more of his books

One of those stories you couldn't put down

Incredible first story from this author.

What did you love best about The Hunter?

The British assassin. Because he is a slightly twisted fellow.

Fast paced right from the go and kept me on the edge of my seat.

Will definitely buy the next one in the series.

Have you listened to any of Daniel Philpott’s other performances before? How does this one compare?

This was the first one. His accents and characters are very good.

Though its not all that this book is about, but Tom Wood has a good grasp of depicting hand to hand combat, he either researched well or has experience - either way the story is richer for it. Looking forward to the next book.

Would you try another book written by Tom Wood or narrated by Daniel Philpott?

Probably would not try another book by this author, but the narrator was good overall.

Would you recommend The Hunter to your friends? Why or why not?

Not really. Whilst the writing is good and the plot reasonable, if not startlingly original, I felt that there is just too much action and not enough intrigue to maintain interest. In fact, the almost constant gun battles and chases are unrelenting and, eventually, terribly tedious. I gave up completely about an hour out from the end when yet another fight and chase broke out in exhaustive and exhausting detail and I lost interest in the outcome of the story and the fate of the main character.

Which character – as performed by Daniel Philpott – was your favourite?

The narrator played the various parts without overdoing the accents, but the characters were hardly engaging enough to choose any favourite performance from Mr Philpott.

Did The Hunter inspire you to do anything?

Luckily, I'm not given to indulging in murderous rampages with automatic weapons, so no.

I love a good action story - Frederick Forsyth, Gerald Seymour etc. - and the action scenes in this book were certainly well written and finely detailed, but for me (an ex-Army Officer) it was just a bit too wearing in the end.

Victor what a character !!

Where does The Hunter rank among all the audiobooks you’ve listened to so far?

Love this book and the both the writing and narration.
Was sorry it had to finish but went straight on to book 2
Please release book 3 asap

What does Daniel Philpott bring to the story that you wouldn’t experience if you had only read the book?

His narration is excellent, puts across the character in a way that is both believable and interesting. Many a good book can be spoiled by poor narration but this choice was spot on

Where does The Hunter rank among all the audiobooks you’ve listened to so far?

Certainly up within the top few

I like the books and character of Victor the assassin. But I don't like the what the narrator seems to struggle between his own voice that of the characters and often then stays in the accent of which ever character when reading the story

Would you consider the audio edition of The Hunter to be better than the print version?

What was one of the most memorable moments of The Hunter?

Great description of a stake out scene in a Swiss Chalet and the associated firefight.

Will Victor Make It?

Well worth a listen. Recommended.

Lead character Victor is a fascinating chap. The story winds its was around him. Thoroughly recommend

A excellent holiday read - easy to fall straight into and not put down until finished. Narration was perfect for the character. All in all - excellent book and Well recommended

The Hunter Kept me on edge from page 1

Would you consider the audio edition of The Hunter to be better than the print version?

What was one of the most memorable moments of The Hunter?

The action started from page 1

Kept me on tenterhooks the whole time

Liked it Fast moving. Action. Twists. What's not to like, Five stars from me on this

I've been left wanting to hear what happens next to see what Victor is going to do.