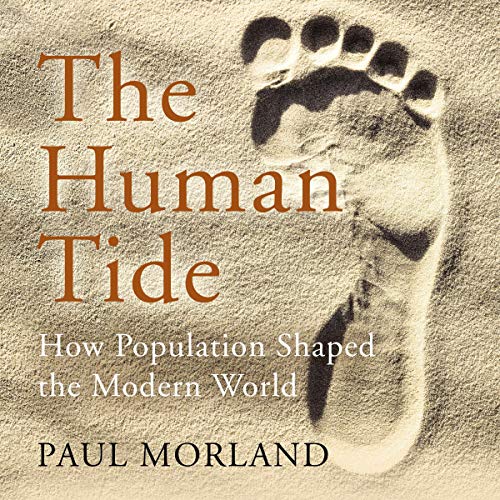 A dazzling new history of the modern world, as told through the remarkable story of population change.

Every phase since the advent of the industrial revolution - from the fate of the British Empire, to the global challenges from Germany, Japan and Russia, to America's emergence as a sole superpower, to the Arab Spring, to the long-term decline of economic growth that started with Japan and has now spread to Europe, to China's meteoric economy, to Brexit and the presidency of Donald Trump - can be explained better when we appreciate the meaning of demographic change across the world. The Human Tide is the first popular history book to redress the underestimated influence of population as a crucial factor in almost all of the major global shifts and events of the last two centuries - revealing how such events are connected by the invisible mutually catalysing forces of population.

This highly original history offers a brilliant and simple unifying theory for our understanding the last 200 years: the power of sheer numbers. An ambitious, original, magisterial history of modernity, it taps in to prominent preoccupations of our day and will transform our perception of history for many years to come.

The human tide is the story of how demography shapes history and is shaped by it. Paul Norland describes in detail how country after country, starting with England, used industrialization to escape the 'Malthusian trap', the vicious cycle in preindustrial societies where an impoverished population always outstrips food production and always lives at subsistence levels.
In the story of the human tide, country after country goes through a demographic transition with a period of population explosion that then reverts to a modern low growth level at a high standard. Morland tells this story in great detail, its interplay with political, social, and economic development, and never loses sight of the individual in the statistics, the human joy and suffering behind the numbers.
I find this unusual view of history both enlightening and fascinating. If you are worried about too many immigrants into your country, this book is for you. If you are wondering why there are so few other children at the playground for your own child to play with, this book is for you. If you worry about overpopulation of your own country or the planet, this book is for you.
The story of the human tide is well written and masterfully narrated by Zeb Soanes,.

simply the best non fiction book I have read it in 20 years. an eye-opener,a pleaser, and a genuinely positive aura.

I am half way through this book. Full of great stuff BUT Zeb reads it like a continuity announcer, his sentences rising and falling as if to bring forward the next instalment. I may not get to the end because of it. If it wasnt so interesting I would have jacked it after chapter 1.

This is a brilliant book which explains so much, without really banging its own drum. The author is quite modest about how much demographics explains about the whole if human history. Really it explains a lot, and the near future is pretty much mapped out in terms of likely trends. The format of the book is to go round the world country by country and explain how the same patterns repeat themselves again and again across the centuries and the continents. We're all individuals but together we act in very predictable ways.

Some very thought provoking arguments - read in the tones of a BBC radio presenter. Well worth a listen, but perhaps also read the books on why history is governed by geography!